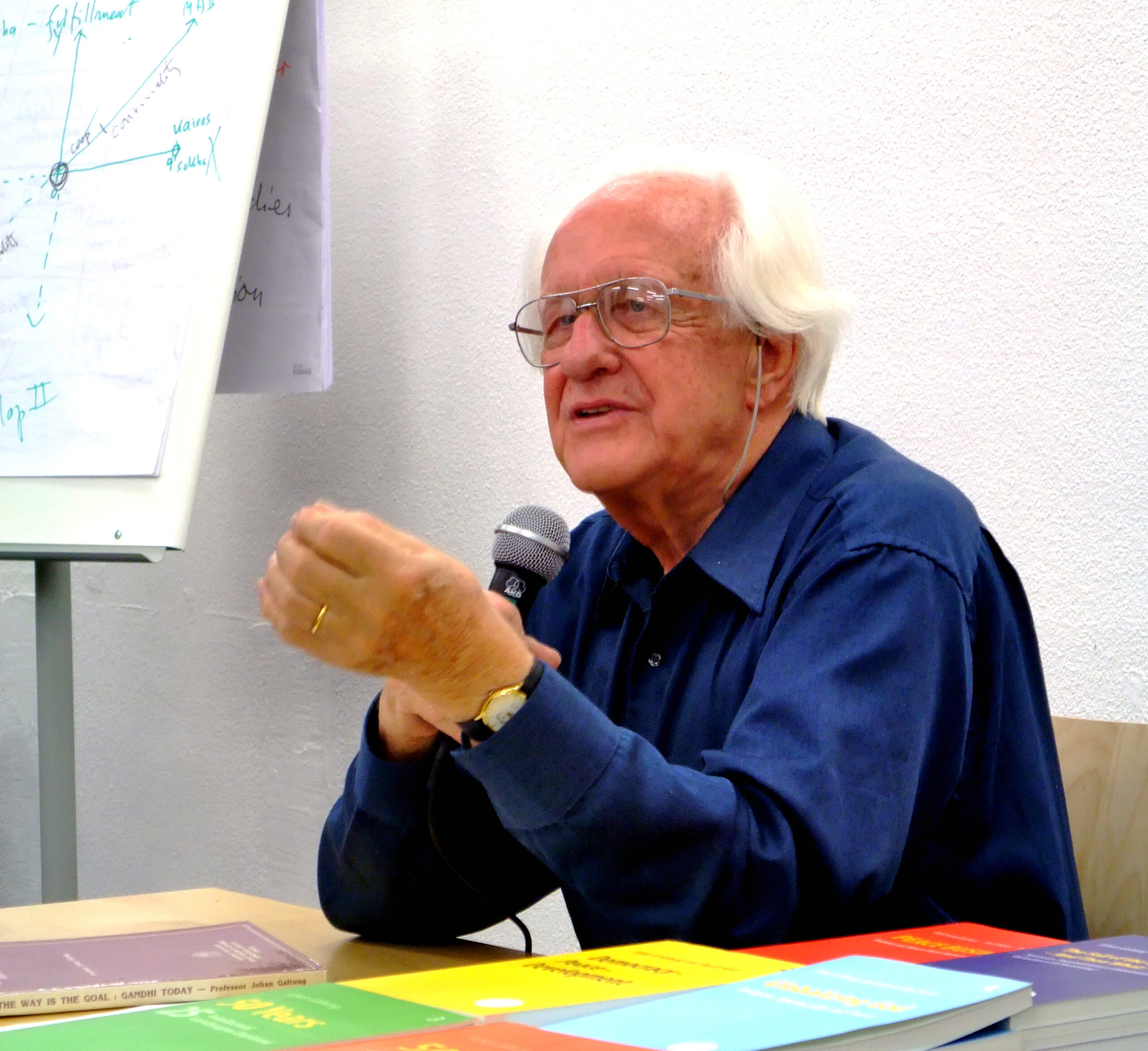 Johan Galtung is a Member of the Advisory Board of World BEYOND War. He is from Norway and based in Spain.

Johan Galtung, dr, dr hc mult, a professor of peace studies, was born in 1930 in Oslo, Norway. He is a mathematician, sociologist, political scientist and the founder of the discipline of peace studies. He founded the International Peace Research Institute, Oslo (1959), the world’s first academic research center focused on peace studies, as well as the influential Journal of Peace Research (1964). He has helped found dozens of other peace centers around the world.

He has served as a professor for peace studies at universities all over the world, including Columbia (New York), Oslo, Berlin, Belgrade, Paris, Santiago de Chile, Buenos Aires, Cairo, Sichuan, Ritsumeikan (Japan), Princeton, Hawai’i, Tromsoe, Bern, Alicante (Spain) and dozens of others on all continents. He has taught thousands of individuals and motivated them to dedicate their lives to the promotion of peace and the satisfaction of basic human needs.

He has mediated in over 150 conflicts between states, nations, religions, civilizations, communities, and persons since 1957. His contributions to peace theory and practice include conceptualization of peacebuilding, conflict mediation, reconciliation, nonviolence, theory of structural violence, theorizing about negative vs. positive peace, peace education and peace journalism. Prof. Galtung’s unique imprint on the study of conflict and peace stems from a combination of systematic scientific inquiry and a Gandhian ethics of peaceful means and harmony.

Johan Galtung has conducted a great deal of research in many fields and made original contributions not only to peace studies but also, among others, human rights, basic needs, development strategies, a world economy that sustains life, macro–history, theory of civilizations, federalism, globalization, theory of discourse, social pathologies, deep culture, peace and religions, social science methodology, sociology, ecology, future studies.

He is author or co–author of more than 170 books on peace and related issues, 96 as the sole author. More than 40 have been translated to other languages, including 50 Years-100 Peace and Conflict Perspectives published by TRANSCEND University Press. Transcend and Transform was translated to 25 languages. He has published more than 1700 articles and book chapters and wrote over 500 weekly editorials for TRANSCEND Media Service-TMS, which features solutions-oriented peace journalism.

In 2008 he founded the TRANSCEND University Press and he is the founder (in 2000) and rector of the TRANSCEND Peace University, the world’s first online Peace Studies University. He is also the founder and director of TRANSCEND International, a global nonprofit network for Peace, Development and the Environment, founded in 1993, with over 500 members in more than 70 countries around the world. As a testimony to his legacy, peace studies are now taught and researched at universities across the globe and contribute to peacemaking efforts in conflicts around the world.

He was jailed in Norway for six months at age 24 as a Conscientious Objector to serving in the military, after having done 12 months of civilian service, the same time as those doing military service. He agreed to serve an extra 6 months if he could work for peace, but that was refused. In jail he wrote his first book, Gandhi’s Political Ethics, together with his mentor, Arne Naess.

As a recipient of over a dozen honorary doctorates and professorships and many other distinctions, including a Right Livelihood Award (also known as Alternative Nobel Peace Prize), Johan Galtung remains committed to the study and promotion of peace.