Keeping Hope Alive and Gettin’ on the Peace Train in Nagoya, Japan

By Joseph Essertier, World BEYOND War.

People in Japan are jumping on the “peace train” headed for an end to the Korean War. As Christine Ahn of Women Cross DMZ has pointed out, the “Korea peace train has left the station whether the US is on or not.” (See Christine Ahn and Joe Cirincione’s May 27 interview on MSNBC at https://www.msnbc.com/am-joy/watch/north-korea-and-south-korea-leaders-meet-despite-trump-1242553923608). I emphasized in my speech that since President Trump’s overall erratic behavior — and specifically, his messaging to North Korea — will inevitably cause Washington to be isolated. It is time for Japan to choose a new leader, one who represents their interests, who does not blindly follow Washington’s lead in international politics, and who works toward peace. Otherwise, Japan will be isolated, too. As Joe Cirincione said, Trump’s Washington is playing a game of “rollercoaster diplomacy” that unnerves US allies in East Asia.

Participants held up colorful signs and gave impassioned speeches — all including the unified demand for peace on the Korean Peninsula. At long last, peace may be possible, if we tenaciously work for it, after 70 years of Korean pain and suffering that includes: the US occupation from 1945 to 1948; the Korean War that ended in 1953; and the continually maintained division of the country into two parts. And all this was preceded by pre-1945 suffering during a half-century of intrusion and brutal colonization by the Empire of Japan (1868-1947). In that incarnation, as the Empire, Tokyo exacerbated class conflict on the Peninsula and helped set the stage for the Korean War. So it can be said that this neighbor in particular (but also, to a lesser but significant extent, other powerful states in the region), bear much responsibility for Korean suffering.

Nevertheless, it is Washington, the distant outsider, the non-neighbor, who has nothing to lose by war in the region and as the most powerful state there for the past seven decades, who has manipulated Korea to its advantage through the age-old strategy of divide and conquer, that has the most blood on its hands. Therefore, Americans carry the heaviest responsibility of all, among the parties involved in the Korean War, to demand that the siege of the economic sanctions and the threats of a second holocaust on the Peninsula (symbolized by the military bases that violate South Korea’s sovereignty and the right to self-determination of all Koreans), finally end — once and for all. Fortunately, more and more peace-loving Americans are taking an interest in Korea, studying the “world” history (that is actually American history) that their high school teachers did not teach them, and demanding that the bullying stop.

Specific messages expressed at the candlelight vigil in signs and speeches supported the overall demand for peace on the Peninsula. The signs read: “Tokyo must engage in dialog with Pyongyang,” “Support the US-North Korea summit of 12 June,” “Replace the Armistice of 1953 with a peace treaty ending the Korean War,” “Stop hate speech and other discrimination against Koreans who reside in Japan,” “Abolish nuclear weapons,” and “Free Northeast Asia of US military bases.”

Japanese and Korean participants freely expressed their opinions in speeches. Songs were sung in Korean, Japanese, and English. Koreans shared with everyone their culture and stories, including Korean songs and a dance. The street was lit up with candles representing hopes for peace and a video recording of the inspiring rendition of John Lennon’s “Imagine” by Watanabe Chihiro, a Japanese junior-high-school girl, was shown on a projector on the street. (https://www.youtube.com/watch?v=0SX_-FuJMHI)

For anyone who knows a little about the history of Korea and who has followed the rollercoaster diplomacy of the last year — under the belligerent Trump presidency and government that includes the first-class militarists John Bolton and Mike Pence — it is obvious that peace would bring tremendous improvements in human rights, freedom, democracy, and prosperity for all Koreans, North and South; as well as peace for Northeast Asia as a whole.

All states, including the Nuke Haves, must sign the Treaty on the Prohibition of Nuclear Weapons, the fruition of several decades of grassroots struggle that go back to the UK’s Campaign for Nuclear Disarmament (CND) out of which the original peace symbol originated. 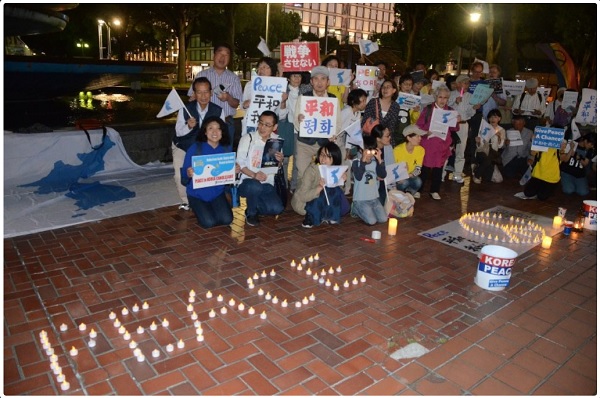 Feeling inspired by the non-violent but powerful Candlelight Revolutionaries of South Korea, some of us formed that same peace symbol with candles on a busy street in the center of Nagoya to convey to the people of Japan and the world our dream of peace and our hope that the June 12 summit goes forward. (https://mainichi.jp/articles/20180527/k00/00m/040/094000c).

Thanks to Gar Smith of World BEYOND War for helpful editing.