Kucinich Says Call for Diplomacy to end Ukraine-Russia War Must be Heard; Silencing of Congressional Progressive Caucus Casts Dems as the “War Party” 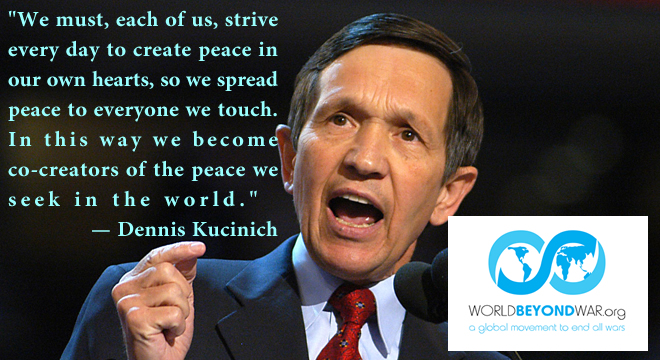 CLEVELAND (Oct. 26) Weds – – Dennis J. Kucinich, former Congressman and former Democratic Presidential candidate today called upon Congressional Democrats to “rethink their opposition to diplomacy” as a means to end the war between Russia and Ukraine.

During his eight terms in congress, Kucinich led Democratic members’ efforts against the US-sponsored wars in Afghanistan, Iraq, Libya, Syria and worked to end the war in the Balkans and to divert war against Iran.

“War is ultimately a failure of political leadership.  Diplomacy is difficult.  It requires intelligence, skill and patience.  The only way wars end is at the negotiating table,” Kucinich said.

Kucinich spoke in response to the recent retraction by the Congressional Progressive Caucus of the letter, signed by 30 Members of Congress, which called upon the Administration to aggressively seek diplomacy to end the most recent conflict which began with Russia’s invasion on February 24 of this year and which has resulted in over 15,000 deaths of Ukrainian civilians, and the deaths of tens of thousands of soldiers from both Ukraine and Russia.

“The Caucus’ letter, far from being sympathetic to Russia, sought to end the suffering of the Ukrainian people, while preserving their independence.  The letter revealed an understanding of the risks of wider war, even a nuclear war, unless diplomacy is pursued,” Kucinich said.

Kucinich reminded Members of Congress that President Jimmy Carter used US diplomacy to achieve the Camp David Accords on September 17, 1978, with Israeli Prime Minister Menachem Begin and Egyptian President Anwar Sadat.  US diplomacy brought about the Dayton Accords of November 21, 1995, which ended war in the Balkans.   US Senator George Mitchell of Maine negotiated with multiple parties to bring about the Good Friday Agreement on April 10, 1998, which ended 30 years of deadly conflict in Northern Ireland, known as “The Troubles.”

“Remember the words from John F. Kennedy’s January 20, 1961, Inaugural Address: ‘Let us never negotiate out of fear.  Let us never fear to negotiate.’ It was that type of thinking which produced negotiations between the US and the Soviet Union which averted a nuclear war during the Cuban Missile Crisis, October 16, 1962 – October 29, 1962.

Kucinich said that the obvious strong-arming and silencing of Caucus members who want a negotiated settlement in Ukraine casts the Democratic Party as a “Party of War,” he said. “It’s time for the Party to rethink Democratic opposition to diplomacy.”

“Democrats must not make support for the war, and its expansion, a test of party loyalty. We owe it to the people of Ukraine, Russia, the United States and the world to help negotiate a settlement to end this war which has already had severe global consequences, created energy and food scarcity and propelled sharp price increases,” he said.

US aid to Ukraine in 2022 currently stands in excess of $60 billion.