Letter of Support for German Peace Groups Demonstrating on October 1, 2022 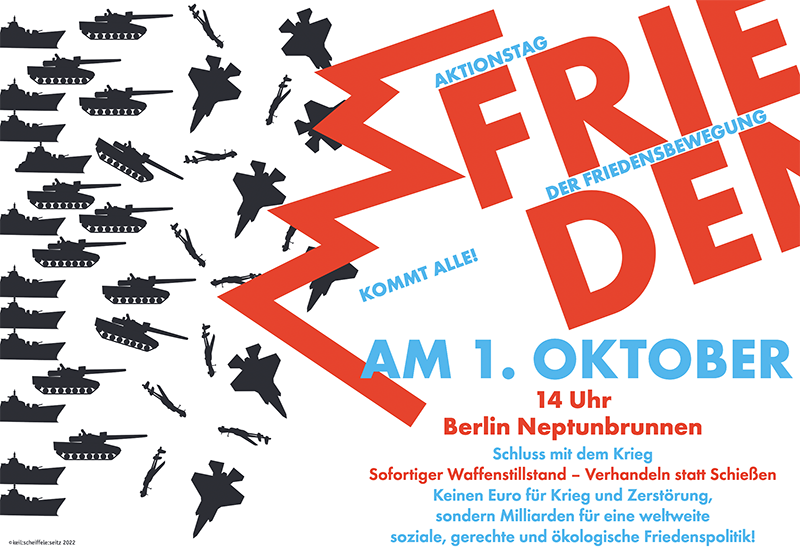 World BEYOND War fully supports German peace groups in their call for an end to war and a swift reversal of recent decisions to produce and supply more weapons to other countries.

By year end the US will have funneled over $60 billion in US treasure to weaponizing Ukraine forces seeking to reclaim the roughly 47,000 square miles (20%) of Ukraine under Russian control. Ukraine’s recent retaking of the Kharkov Region amounts to just 1,000 of those square miles (2%).

A decision by Germany’s elected officials to resume the moderating presence they formerly maintained, following World War II, could save the entire world from a nuclear Armageddon as nuclear threats escalate. We need your leadership to again resist the perpetuation and spread of alarmingly violent dynamics.

Opportunities for diplomacy and dialogue have been squandered by military and political leaders of all of the warring parties. With nuclear threats being issued, it is scandalous to continue pouring weapons into the region. The Russo Ukraine war, with its proxy feature between Russia and the US, would be horrible if neither the United States nor Russia had nuclear weapons. But with both possessing over 3,000 between them, one battlefield error, misjudgment, intentional provocation, or simple bad luck could turn the current conventional conflict into nuclear Armageddon.

May we be guided by Pope Francis’s words, spoken on March 27th of this year:

“Before the danger of self-destruction, may humanity understand that the moment has come to abolish war, to erase it from human history before it erases human history!”