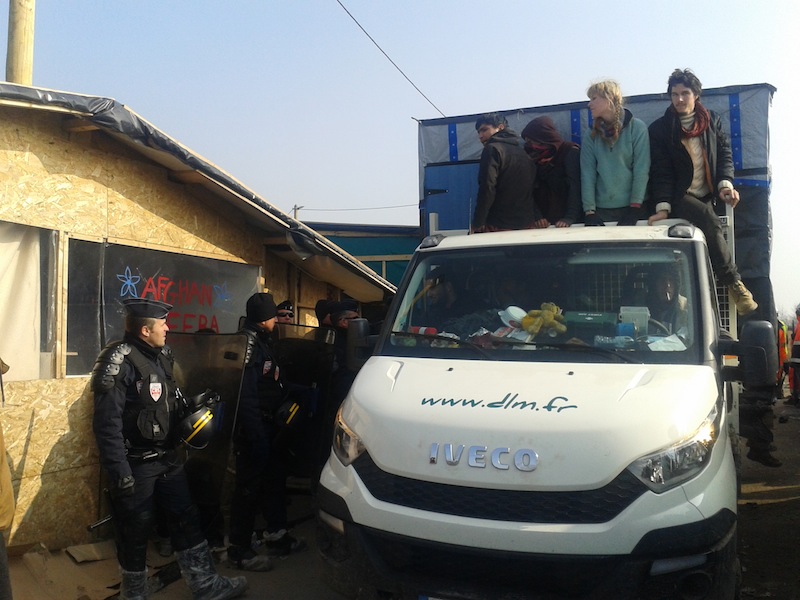 This month, French authorities (supported and funded by the UK government to the current balance of £62 million) [1] have been demolishing the ‘Jungle,’ a toxic wasteland on the edge of Calais. Formerly a landfill site, 4 km² it is now populated by approximately 5,000 refugees who have been pushed there over the past year. A remarkable community of 15 nationalities adhering to various faiths comprises the Jungle. Residents have formed a network of shops and restaurants which, along with hamams and barber shops contribute to a micro-economy within the encampment.  Community infrastructure now includes schools, mosques, churches and clinics.

Afghans, numbering approximately 1,000, constitute the largest national group. Among this group are people from each of the main ethnicities in Afghanistan:  Pashtoons, Hazaras, Uzbeks and Tajiks. The Jungle is an impressive example of how people from different nationalities and ethnicities can live together in relative harmony, despite oppressive hardship and infringement of universal rights and civil liberties. Arguments and scuffles sometimes break out, but they’re normally catalysed by French authorities or traffickers.

Earlier this month Teresa May won a significant battle to restart flights deporting Afghans back to Kabul, on the grounds that it is now safe to return to the capital city. [2]

Just 3 months ago I sat in the Kabul office of ‘Stop Deportation to Afghanistan.’ [3] Sunlight poured through the window like golden syrup on a top floor apartment, the city of Kabul shrouded in dust splayed out like a postcard. The organisation is a support group run by Abdul Ghafoor, a Pakistan-born Afghan who spent 5 years in Norway, only to be deported to Afghanistan, a country he had previously never visited. Ghafoor told me about a meeting he had recently attended with Afghan government ministers and NGOs – he laughed as he described how the non-Afghan NGO workers arrived at the armed compound wearing bullet proof vests and helmets, and yet Kabul has been deemed a safe space for returning refugees.  The hypocrisy and double standards would be a joke if the upshot was not so unfair. On one hand you have foreign embassy staff being airlifted (for security reasons) [4] by helicopter within the city of Kabul, and on the other you have various European governments saying it’s safe for thousands of refugees to return to Kabul.

Having visited Kabul 8 times in the last 5 years, I’ve been acutely aware that security within the city has drastically declined. As a foreigner I no longer take walks longer than 5 minutes, day trips to the beautiful Panjshir Valley or the Qarga lake are now considered too risky. Word on the Kabul streets is that the Taliban are strong enough to take the city but can’t be bothered with the hassle of running it; meanwhile independent ISIS cells have established a foothold [6]. I regularly hear that Afghan life today is less secure than it was under the Taliban, 14 years of US/NATO-backed war has been a disaster.

Back in the Jungle, north France, 21 miles from the British isles, around 1,000 Afghans dream of a safe life in Britain. Some have previously lived in Britain, others have family in the UK, many have worked with the British military or NGOs. Emotions are manipulated by traffickers who describe the streets of Britain as paved with gold.  Many refugees are discouraged by the treatment they’ve received in France where they’ve been subjected to police brutality and attacks by far-right thugs. For various reasons they feel the best chance of a peaceful life is in Britain. Deliberate exclusion from the UK just makes the prospect even more desirable. Certainly the fact that Britain has agreed to take only 20,000 Syrian refugees over the next 5 years [7], and overall the UK is taking 60 refugees per 1,000 of the local population who claimed asylum in 2015, compared to Germany which is taking 587 [8], has played into the dream that Britain is the land of exclusive opportunity.

I spoke with Afghan community leader Sohail, who said: “I love my country, I want to go back and live there, but it’s just not safe and we have no opportunity to live. Look at all the businesses in the Jungle, we have talents, we just need the opportunity to use them”. This conversation happened in the Kabul Café, one of the social hotspots in the Jungle, just one day before the area was set ablaze, the whole south high street of shops and restaurants razed to the ground.  After the fire, I spoke with the same Afghan community leader. We stood amid the demolished ruins where we had drunk tea in the Kabul café.   He feels deeply saddened by the destruction. “Why did the authorities put us here, let us build a life and then destroy it?”

Two weeks ago the south part of the Jungle was demolished: hundreds of shelters were burnt or bulldozed leaving some 3,500 refugees with nowhere to go [9]. The French authorise now want to move onto the north part of the camp with the aim of rehousing most refugees within white fishing crate containers, many of which are already set up in the Jungle, and currently accommodate 1,900 refugees. Each container houses 12 people, there’s little privacy, and sleeping times are determined by your ‘crate mates’ and their mobile phone habits.  More alarmingly, a refugee is required to register with French authorities. This includes having your finger prints digitally recorded; in effect, it’s the first step into forced French asylum.

The British government has consistently used the Dublin Regulations [10] as legal grounds for not taking its equal quota of refugees. These regulations prescribe that refugees should seek asylum in the first safe country they land in. However, that regulation is now simply impractical.  If it was properly enforced, Turkey, Italy and Greece would be left to accommodate the millions of refugees.

Many refugees are requesting for a UK asylum centre within the Jungle, giving them the ability to start the process for asylum in Britain. The reality of the situation is that refugee camps like the Jungle are not stopping people from actually entering the UK. In fact these blights on human rights are reinforcing illegal and harmful industries such as trafficking, prostitution and drug smuggling. European refugee camps are playing into the hands of human traffickers; one Afghan told me that , the current going rate to be smuggled into the UK is now around €10,000  [11], the price having doubled over the last few months. Setting up a UK asylum centre would also remove the violence which often occurs between truck drivers and refugees, as well as tragic and fatal accidents which come about during transit into the UK. It’s perfectly possible to have the same number of refugees entering the UK via legal means as there are by the ones which exist today.

The south part of the camp now stands desolate, burnt to the ground other than for a few social amenities. An icy wind whips across the expanse of littered wasteland. Debris flaps in the breeze, a sad combination of rubbish and charred personal belongings. French riot police used tear gas, water canons and rubber bullets to aid the demolition. Currently there’s a stalemate situation wherein some NGOs and volunteers are reluctant to rebuild homes and constructions which might quickly be demolished by French authorities.

The Jungle represents incredible human ingenuity and entrepreneurial energy exhibited by refugees and the volunteers who have poured their lives into making a community to be proud of; simultaneously it’s a shocking and shameful reflection of the decline in European human rights and infrastructure, where people who flee for their lives are forced to inhabit communal crate containers, a form of indefinite detention. Unofficial comments made by a representative of the French authorities indicates a possible future policy whereby refugees who choose to remain outside of the system, opting either to be homeless or not to register, could potentially face imprisonment for up to 2 years.

France and Britain are currently shaping their immigration policy. It is especially disastrous for France, with a constitution founded on “Liberte, Egalite, Fraternite”, to base that policy on demolishing temporary homes, excluding and incarcerating refugees, and forcing refugees into unwanted asylum. By giving people the right to choose their country of asylum, assisting with basic needs such as accommodation and food, responding with humanity rather than suppression, the State will be enabling the best possible practical solution, as well as complying with international human rights, laws set down to protect the safety and rights of everyone in the world today.

Maya Evans coordinates Voices for Creative Non-Violence UK, she has visited Kabul 8 times in the last 5 years where she works in solidarity with young Afghan peace makers.