How to make peace? Colombia’s historic deal has lessons for Syria

By Sibylla Brodzinsky, The Guardian

Wars are easier to start than stop. So how did Colombia do it – and what can the world learn from that breakthrough? 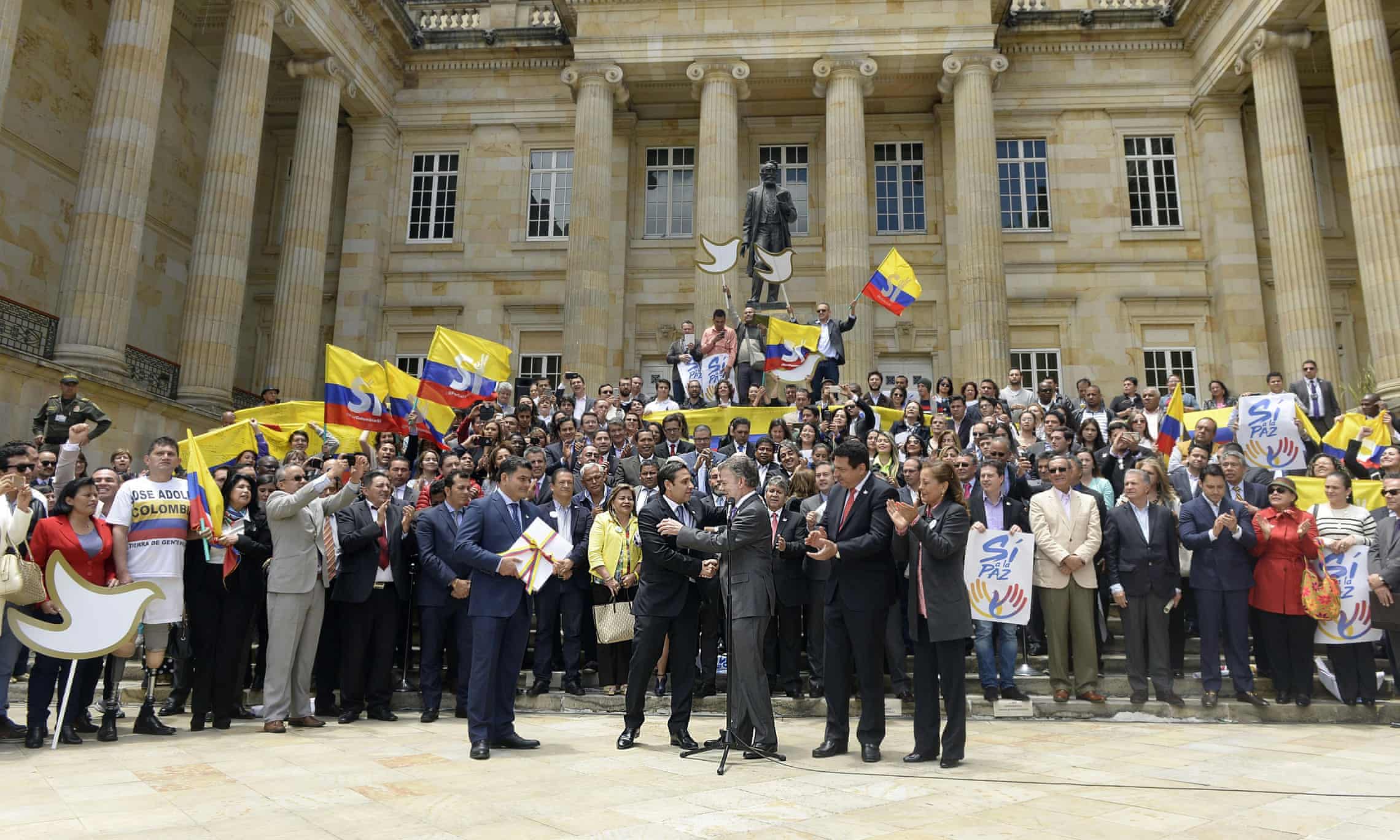 It’s far easier to start a war than stop one, especially when the conflict has lasted longer than many people have been alive, making peace an unfamiliar prospect.

But Colombians showed the world this week that it can be done. After 52 years of hostilities, the Colombian government and leftist rebels of the Revolutionary Armed Forces of Colombia, or the Farc, finalised a deal to end their war. A bilateral ceasefire is to go into effect on Monday after decades in which 220,000 people – mostly non-combatants – have been killed, more than 6 million internally displaced and tens of thousands disappeared.

Previous attempts to reach this point failed time and again. So how did they get there this time and what lessons are there for Syria and other nations in conflict?

Make peace with who you can when you can

Former president César Gaviria recently recalled that his son had once asked him how peace would be achieved in Colombia. “In bits and pieces,” he told him. Making peace between multiple factions is like three-dimensional chess – a fact that will not be lost on those trying to bring peace to Syria. Reducing the complexity is essential, the Colombia experience shows. 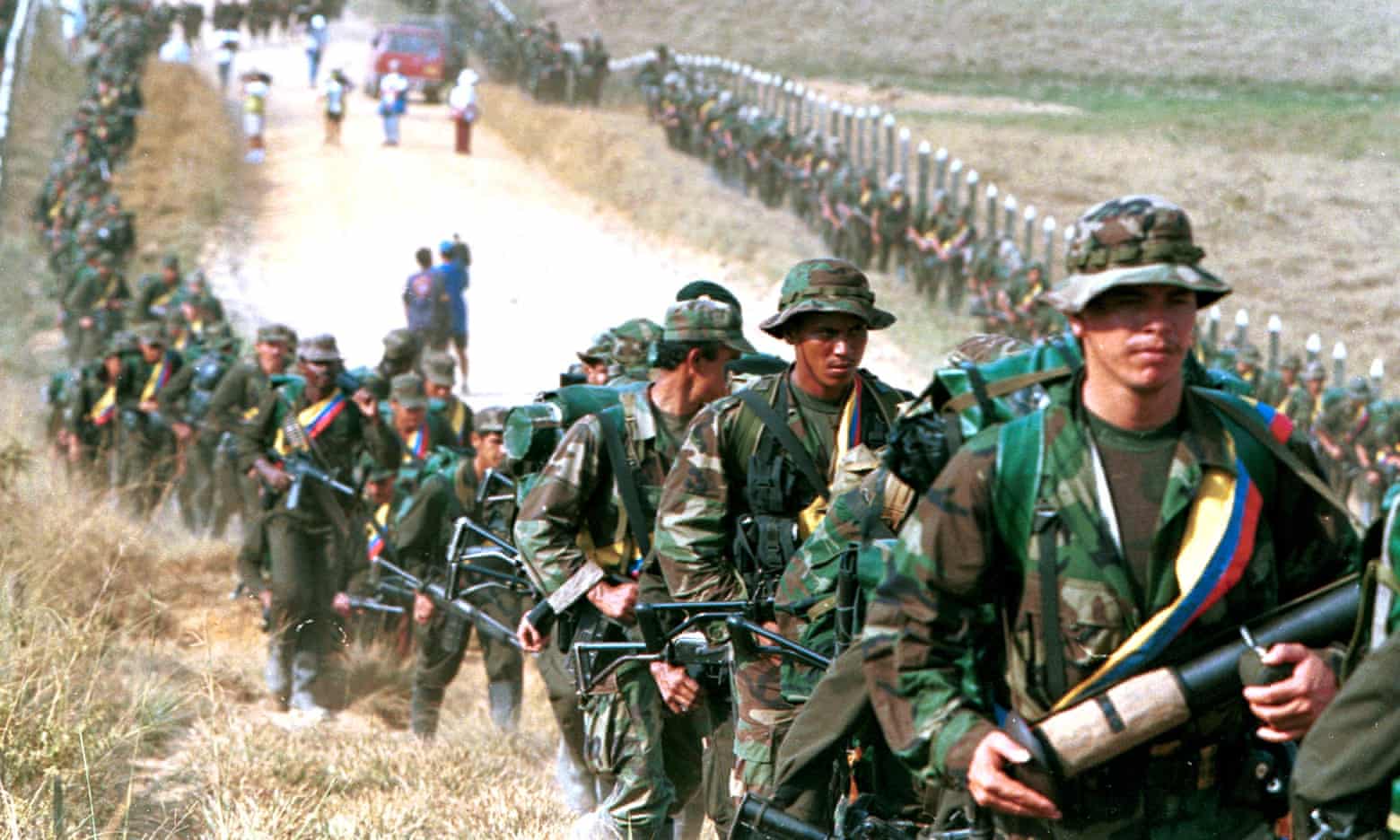 Colombia has actually been doing this piecemeal for more than 30 years. The Farc is but one of many illegal armed groups that have existed in Colombia. The M-19, Quintín Lame, EPL – all have negotiated peace deals. The AUC, a federation of rightwing paramilitary militia groups – which fought the Farc as a proxy of a then-weak military – demobilised in the early 2000s.

It helps if one side has the upper hand

In the 1990s, flush with proceeds from Colombia’s booming drug trade, the Farc had Colombia’s military on the run. The rebels, who numbered about 18,000, seemed to be winning the war. It was in that context that the Farc and government of the then-president, Andrés Pastrana, began peace talks in 1999 that dragged on with no significant progress and finally broke down in 2002.

By then, however, the Colombian military had become one of the largest recipients of US military aid. Equipped with new helicopters, better trained soldiers and new means of collecting intelligence, they were able to tip the balance.

By the mid 2000s, under a fierce military campaign ordered by the then president, Álvaro Uribe, it was the rebels who were on the run, beaten back into remote jungles and mountains, with thousands of their members deserting. For the first time ever in the war, the military targeted and killed top Farc leaders.

In this respect, Colombia’s experience mirrors that of the Bosnian war, in bloody deadlock for three years until Nato intervention in 1995 routed Serb forces and made it in their interest to secure a peace.

In lengthy wars like Colombia’s, it will probably take a generational shift at the top to find leaders genuinely committed to seeking a negotiated solution.

Farc founder Manuel “Sureshot” Marulanda died a peaceful death in his rebel camp in 2008 aged 78. He had led the rebel group as its top leader since the group’s founding in 1964, following a military airstrike on a peasant enclave. Decades later he still complained of the chickens and pigs the soldiers killed. He cut an unlikely peacemaker.

His death brought a new Farc generation into power, as Alfonso Cano took over. It was Cano who began initial secret talks with the president, Juan Manuel Santos, in 2011. After he was killed in a bomb raid on his camp later that year, the new leadership under Rodrigo Londoño, aka Timochenko, decided to continue to explore the possibility of a peace process.

On the government side, Santos was elected in 2010 to succeed Uribe, under whose two-term presidency the Farc suffered their heaviest losses. As Uribe’s defence minister, Santos had overseen many of those operations and had been expected to continue the same policies. Instead, recognising the opportunity to finish what he had started, he persuaded the Farc to begin peace talks.

Both the Farc and the government understood that neither side had won and neither had been defeated. That meant both sides had to make compromises at the negotiating table. Trying to establish how far each side was willing to go on each point kept the negotiators busy for four intense years.

The Marxist Farc gave up their demand for comprehensive agrarian reform and agreed to sever all ties to drug trafficking, a business that had made them hundreds of millions of dollars.

The government, in exchange, granted the Farc access to political power, by guaranteeing they will hold 10 seats in Congress in 2018, even if the political party they will create does not get enough votes in the legislative elections that year.

And the Farc leaders, even those who carried out kidnappings, indiscriminate attacks on civilians and forced recruitment of minors, can avoid jail time by confessing their crimes and serving “alternative sentences” such as long-term community service.

Armed struggles have fallen into disfavour throughout Latin America, once a hotbed of insurgencies. A decade ago, leftist leaders were in power across the region. In Brazil and Uruguay, former leftist guerrillas had become presidents through the ballot box. Hugo Chávez, who started his self-styled socialist “Bolivarian revolution”, was consolidating himself in Venezuela. Those regional references gave the Farc confidence.

But regional tides have shifted since then. Brazil’s Dilma Rouseff is facing impeachment, Chávez succumbed to cancer three years ago and his successor,Nicolás Maduro, has driven the country into the ground. These are hard times both for the left and for the revolutionaries.

Societies don’t stand still. Change gradually leads to tipping points beyond which the old order seems incongruous. Antagonisms that seemed justified 30 years ago no longer make any sense. This is particularly true of Colombia.

In the past 15 years it has seen levels of violence drop and investment rise. Tourists began to discover the country after an international advertising campaign told foreigners that in Colombia “the only risk is wanting to stay”. Football stars such as James Rodríguez, the singer Shakira and the actor Sofia Vergara started replacing Pablo Escobar as the face of the country.

For the first time in decades Colombians were feeling good about themselves and their country. The war became an anachronism.

Taken from the Guardian: https://www.theguardian.com/world/2016/aug/28/how-to-make-peace-colombia-syria-farc-un