The Man Who Stood Up to Armageddon

Suddenly it’s possible — indeed, all too easy — to imagine one man starting a nuclear war. What’s a little harder to imagine is one human being stopping such a war. 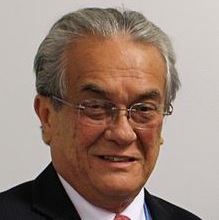 The person who came closest to this may have been Tony de Brum, former foreign minister of the Marshall Islands, who died last week of cancer at age 72.

He grew up in the South Pacific island chain when it was under “administrative control” of the U.S. government, which meant it was a waste zone absolutely without political or social significance (from the American point of view), and therefore a perfect spot to test nuclear weapons. Between 1946 and 1958, the United States conducted 67 such tests — the equivalent of 1.6 Hiroshima blasts every day for 12 years — and for much of the time thereafter ignored and/or lied about the consequences.

As a boy, de Brum was unavoidably a witness to some of these tests, including the one known as Castle Bravo, a 15-megaton blast conducted on Bikini Atoll on March 1, 1954. He and his family lived about 200 miles away, on Likiep Atoll. He was nine years old.

He later described it thus: “No sound, just a flash and then a force, the shock wave . . . as if you were under a glass bowl and someone poured blood over it. Everything turned red: sky, the ocean, the fish, my grandfather’s net.

“People in Rongelap nowadays claim they saw the sun rising from the West. I saw the sun rising from the middle of the sky. . . . We lived in thatch houses at that time, my grandfather and I had our own thatch house and every gecko and animal that lived in the thatch fell dead not more than a couple of days after. The military came in, sent boats ashore to run us through Geiger counters and other stuff; everybody in the village was required to go through that.”

The Rongelap Atoll was inundated with radioactive fallout from Castle Bravo and rendered uninhabitable. “The Marshall Islands’ close encounter with the bomb did not end with the detonations themselves,” de Brum said more than half a century later, in his 2012 Distinguished Peace Leadership Award acceptance speech. “In recent years, documents released by the United States government have uncovered even more horrific aspects of this burden borne by the Marshallese people in the name of international peace and security.”

These included the natives’ deliberately premature resettlement on contaminated islands and the cold-blooded observation of their reaction to nuclear radiation, not to mention U.S. denial and avoidance, for as long as possible, of any responsibility for what it did.

In 2014, Foreign Minister de Brum was the driving force behind something extraordinary. The Marshall Islands, which had gained independence in 1986, filed a lawsuit, both in in the International Court of Justice and U.S. federal court, against the nine nations that possess nuclear weapons, demanding that they start living up to the terms of Article VI of the 1970 Treaty on the Non-Proliferation of Nuclear Weapons, which includes these words:

“Each of the Parties to the Treaty undertakes to pursue negotiations in good faith on effective measures relating to cessation of the nuclear arms race at an early date and to nuclear disarmament, and on a treaty on general and complete disarmament under strict and effective international control.”

Right now, Planet Earth could not be more divided on this matter. Some of the world’s nine nuclear powers, including the United States, have signed this treaty, and others have not, or have withdrawn from it (e.g., North Korea), but none of them has the slightest interest in recognizing it or pursuing nuclear disarmament. For instance, all of them, plus their allies, boycotted a recent U.N. debate that led to the passage of the Treaty on the Prohibition of Nuclear Weapons, which calls for immediate nuclear disarmament. One hundred twenty-two nations — most of the world — voted for it. But the nuke nations couldn’t even endure the discussion.

This is the world de Brum and the Marshall Islands stood up to in 2014 — aligned with the Nuclear Age Peace Foundation, an NGO that provided legal help to pursue the lawsuit, but otherwise alone in the world, without international support.

“Absent the courage of Tony, the lawsuits would not have happened,” David Krieger, president of the Nuclear Age Peace Foundation, told me. “Tony was unequaled in being willing to challenge nuclear weapon states for their failure to fulfill their legal obligations.”

And no, the lawsuits didn’t succeed. They were dismissed, eventually, on something other than their actual merits. The U.S. 9th District Court of Appeals, for instance, eventually declared that Article VI of the Non-Proliferation Treaty was “non-self-executing and therefore not judicially enforceable,” which sounds like legal jargon for: “Sorry, folks, as far as we know, nukes are above the law.”

But as Krieger noted, referring to the recent U.N. vote calling for nuclear disarmament, de Brum’s unprecedented audacity — pushing the U.S. and international court systems to hold the nuclear-armed nations of the world accountable — may have served as “a role model for courage. There might have been other countries in the U.N. who saw the courage he exhibited and decided it was time to stand up.”

We do not yet have nuclear disarmament, but because of Tony de Brum, an international movement for this is gaining political traction.

Perhaps he stands as a symbol of the anti-Trump: a sane and courageous human being who has seen the sky turn red and felt the shockwaves of Armageddon, and who has spent a lifetime trying to force the world’s most powerful nations to reverse the course of mutually assured destruction.