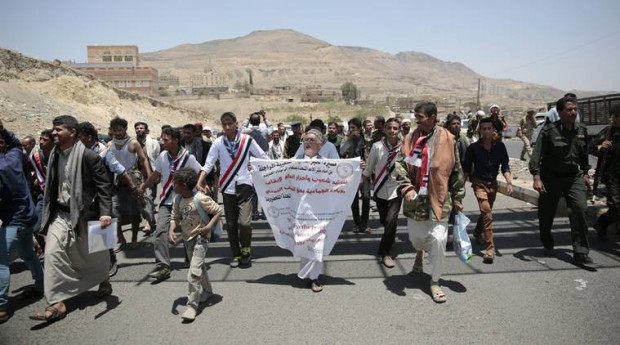 Above Photo: People take part in a march, denouncing plans by the Arab coalition to attack Hodeidah, from Sanaa to the port city of Hodeidah, Yemen, Wednesday, Apr. 19, 2017. (AP Photo/Hani Mohammed)

Yemeni protesters reached the Red Sea city of Hodeida on Tuesday, ending a weeklong march from the capital to demand the rebel-held port be declared a humanitarian zone. Some 25 protesters made the 225-kilometre (140-mile) walk, dubbed the “march for bread”, to call for unrestricted aid deliveries to Yemen, where Iran-backed Huthi rebels have battled government forces allied with a Saudi-led Arab coalition for two years.

Protestors waved flags emblazoned with loaves of bread and chanted slogans demanding the port be spared in the war, which the United Nations estimates has killed more than 7,700 people and left millions struggling to find food. “The Hodeida port has nothing to do with war… Let them fight anywhere, but leave the port alone. The port is for our women, children, our old people,” said protester Ali Mohammed Yahya, who walked for six days from Sanaa to Hodeida.

Hodeida, the main entry point for aid, is currently controlled by the Huthis but fears are mounting over a potential coalition military offensive to seize control of the port. The United Nations last week urged the Saudi-led coalition not to bomb Hodeida, the fourth most populated city in Yemen.

Rights group Amnesty International on Tuesday warned a military offensive “would be devastating far beyond Hodeidah since the city’s port is a crucial access point for lifesaving international aid”. A spokesman for the Saudi-led coalition has however denied plans to launch an offensive on Hodeida.

The conflict in Yemen pits the Huthis, allied with former president Ali Abdullah Saleh, against government forces loyal to current President Abedrabbo Mansour Hadi. The Saudi-led coalition launched an offensive early this year to help Hadi’s forces close in on Yemen’s entire Red Sea coast, including Hodeida. The UN has appealed for USD 2.1 billion in international assistance this year for Yemen, one of four countries facing famine in 2017.