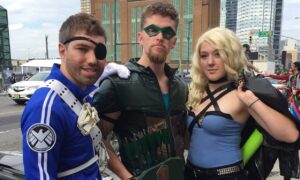 The Marvel comic company dropped a partnership with the defense industry giant Northrop Grumman and canceled a launch event scheduled for New York Comic Con on Saturday, after plans for a special series featuring branded superheroes alongside the legendary Avengers characters met with fierce opposition.

Some fans had planned to protest at the Comic Con event, after Marvel announced via social media that it would launch the limited edition series at its booth at the Jacob K Javits Conference Center on the western side of Manhattan. On Saturday, many attendees welcomed the cancellations.

“I think it was a terrible idea to begin with to try to merge these two worlds,” said Nick Greer from Groton, Connecticut, who was dressed as the Marvel character Nick Fury. “They saw the backlash and they shut it down.”

Marvel Entertainment had posted on Twitter on Friday that it was “joining forces” with Northrop Grumman, which makes stealth bombers and military drones, among other defense systems, and issuing a limited comic series.

Images circulated of a comic cover featuring Avengers heroes such as Captain America alongside a new, corporate-branded troupe of superheroes known as the Northrop Grumman Elite Nexus, or NGEN. Inside the comic would be a full-page advertisement for the defense contractor and, reportedly, job recruitment notices.

Uproar on social media was swift, with fans variously calling the tie-in disgusting, tone deaf, amoral and “propaganda for the military-industrial complex”. Marvel soon announced that the project had been cancelled. 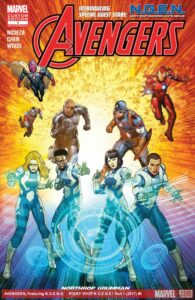 On Saturday at the Javits, the atmosphere was calm and convivial. Fans milled about wearing everything from simple Spider-Man T-shirts to full-head rubber masks and arrays of plastic weaponry.

“Northrop Grumman is a huge defense contractor and after something like the Las Vegas mass shooting, it makes extra sense that people would be pretty upset about such a partnership,” said Kevin Heyel from Rye, New York. “It’s a good vibe here at Comic Con and that kind of tie-in could have disrupted that. But I’m shocked that they pulled the plug on the deal at the last minute.”

Diana Marano, a New Yorker, was dressed as Harley Quinn, a character she described as “Joker’s girlfriend” from DC Comics’ Batman story. She said it was inappropriate for a company that “makes weaponry” to be promoted in a comic series.

Patrick Mahoney, accompanying Marano and dressed as a Star Wars-inspired character, Darth Omegus, said: “I want my fantasy to be my fantasy and my reality to be my reality. I don’t want them crossing over and getting a sense that Donald Trump is going to pop up in my X-Men comic. I like my comics to be fiction for a reason.”

Tom Catt, a Brooklyn drag queen who declined to give his real name, was attending dressed as Cat Woman and with his friend Tony Ray, who was kitted out as the Voltron comic character Princess Allura. Tom Catt said Marvel was guilty of “the militarization of our comics” and said the company had “failed the fan test”. 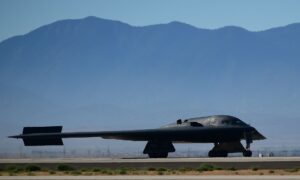 Marvel issued a statement by email on Saturday.

“The activation with Northrop Grumman at New York Comic Con was meant to focus on aerospace technology and exploration in a positive way,” it said. “However, as the spirit of that intent has not come across, we will not be proceeding with this partnership, including this weekend’s event programming.

“Marvel and Northrop Grumman continue to be committed to elevating, and introducing, STEM [science, technology, engineering and mathematics] to a broad audience.”

Northrop Grumman did not immediately respond to a request for comment.

At the Javits, Ruby Coeto was visiting from Queens with her daughters, Camilla, 10, and four-year-old Sophia.

“As a mother, I’m not in favor of a weapons company sponsoring a Marvel comic,” Coeto said. “It makes me feel anxious about my daughters, and that’s not right because we love our superheroes.”

“I like how he saves people and tries to keep everyone safe,” she said.