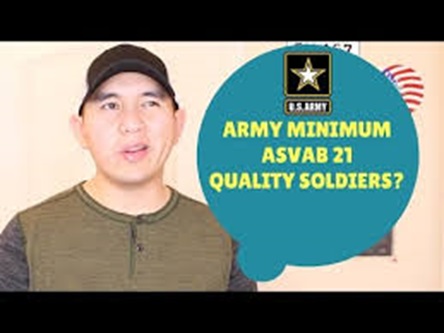 Like President Trump who regularly tweets messages to his audience, the Army’s Recruiting Command has an “alternative” channel to communicate with potential recruits. Enter Archie Masibay, SGT, U.S. Army.

SGT Masibay, AKA Archiezzle, burst upon the world of video recruiting in early 2016, part of a virtual platoon of soldiers in the recruiting command. The Staff Sergeant turned recruiter has produced 430 videos on YouTube with 18 million views and 37,000 subscribers.

Are the sergeant’s frequent explanations of recruiting policy to be regarded as official pronouncements? For instance, the news that the Army will now be accepting soldiers who score a 21 on the ASVAB enlistment test is a radical departure from the past that is sure to send shock waves throughout the Army and American society. Is this for real?

Archie says, “My opinions in my videos about the US Army and the military as a whole does not represent anyone. They are my own based on experience. My Goal here on YouTube is to release my creativity and thoughts about life and military.”

This is absurd but keeps in step with the military’s over-the-top deceptive recruiting practices.

How, exactly, does an active-duty recruiter find the time to produce this massive volume of meticulously researched work?  Many of these videos feature active-duty soldiers during their performance of military duties on military installations.

According to DOD Instruction 1325.06 that regulates this kind of activity, a service member’s right of expression should be preserved to the maximum extent possible, subject to limitations involving the following provisions:  (1) Solicitation; (2) Contempt toward officials; (3) Disrespect toward a superior commissioned officer; (4) Insubordinate conduct toward a warrant officer, noncommissioned officer, or petty officer; (5) Failure to obey an order or regulation; (6) Improper use of a countersign; (7) Aiding the enemy; (8) Provoking speeches or gestures.

Archie seems to be toeing the line, and so are the others in his virtual platoon.

When Kyle Gott, active duty Air Force, stars in a video “8 Lies & 2 Truths about 4 vs 6 year contracts” are we expected to believe these are his own views, perhaps out on a limb, at least somewhat protected by the First Amendment?  Or, is he a shill for the United States Military Processing Command?  Gott has 97,000 subscribers.

In one video, Air Force Kyle takes the MRE (Meals Ready to Eat) cracker challenge from Army Archie, which involves trying to eat two large, dry crackers within two minutes. Kyle couldn’t do it. It is entertaining stuff. Kyle is a great performer and sharp as a tack. The videos are professionally produced, fun to watch.

Thousands of these videos have been produced in the last year with millions of viewers. DOD regulations are pretty clear, “No commander should be indifferent to conduct that, if allowed to proceed unchecked, would destroy the effectiveness of his or her unit.” These videos, it stands to reason, are officially sanctioned.  Furthermore, it is ludicrous to think this volume of high quality film is the result of the independent work of individual soldiers during their spare time.  Every second of every video, including all images, gestures, words, and underlying meanings are carefully vetted by the recruiting command.

The military has been studying this new battleground by learning from the most successful vloggers in the business. For instance, Mark Dice reported in late 2016  that the U.S. Special Operations Command, which is involved in psychological warfare, wanted to send a team of researchers to spend several days with him to learn the secrets to his success.  Dice has a million subscribers on his Facebook Channel. He declined and lampooned the military’s request.
This is what military propaganda looks like.

According to Archie’s Facebook Page, the film star is “a combat medic at the United States Army.”  His military occupational specialty matches that of Roy Lacroix, the Special Forces medic deployed in fictional Czervenia. SGT Lacroix is the hero of the America’s Army Comic Book.  Shown here, holding a stethoscope.

The Army pays handsomely to the brightest minds on Madison Avenue to come up with this stuff.

Archie exhorts his viewers on YouTube to “Smash that Mother F*ing “Like” button!”  His Wife, who frequently joins him, uses the F-word frequently.  She says the drill instructors at boot camp were understanding when she showed fatigue while she was having her period.

Archie keeps an impressive and exhaustive Military Vlog. The address accompanying his work is 2411 Empire Ave. Suite 104 Brentwood CA, the site of the Brentwood Army Recruiting Station. He announced in late 2016 that he was a military recruiter.

Archie is featured in a video, “Opinion on Donald Trump Becoming President,” published the day after the election, in which he says, “I don’t think Trump is going to send us to war. I think he is going to work on the economy of the country.”

The recruiting command is reacting to widespread perceptions that youth are increasingly unwilling to enlist due to concerns about Trump. Archie says, “Trump doesn’t look like a warrior. He won’t want to see anybody’s blood shed.”

Another Archie video,  Should I Join the Military While Trump is President?  has 29,000 views and 437 comments. Archie’s short answer to the question is “yes.”  The comments read as an advertisement for military service. The random negative comments are professionally countered.

The Army is in unfamiliar territory here. They’re operating in a field they don’t entirely control. Groups of activists could upset the apple cart with sharp commentary. The Army doesn’t control YouTube and it doesn’t control Facebook.  They’re vulnerable. Stopping them requires organized virtual resistance, the kind that helped shut down the Army Experience Center and its Facebook page in 2010.

Overall, the comments on Archie’s videos provide insight into how the marketing gurus and the Army brass think the Army needs to pitch recruitment. “Trump is the reason I joined,” Trump is not racist,” and, “I’d be having second thoughts if Hillary was elected.”

Archie dedicates a video to discussing the chances of getting killed while in the Army.  He says, “It really depends on the job that you pick,” but he fails to mention that the Army can change a soldier’s job description without notice.

The individual services have each produced large volumes of videos. They all exhibit similar graphic designs and themes. 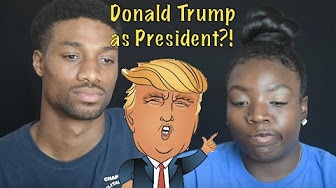 Eboni and Germaine pitch enlistment for the all services, particularly the Air Force, and they’ve also produced a video,  Serving in the Military with Donald Trump as President. The video tells viewers not to worry about Trump and a host of comments echo that view.

JTsuits produces Navy recruitment videos.  In January of 2016, when the onslaught of military recruitment videos ensued, JT released, “Channel Trailer to End All Channel Trailers.”  In it, JT says, “Here at JT Suits, we’re a family-run business and it’s my goal to bring you the finest video on the internet.” JTsuit’s You Tube channel carries links to many of the others. Here’s a sampling:

Nava the Beast is an active-duty Marine with 75,000 subscribers. He says he gets up in the morning at 3:00 am to make the videos, despite everyone telling him he shouldn’t.

Gott Love features Kyle Gott, and Makenna, his civilian wife. They also started daily vlogging in January of 2016. They’ve got 44,000 subscribers. They provide a light-hearted and exciting glimpse of military life and the leisure time it provides. Wild Blue Yonder from the Air Force has 201 videos with 19,000 subscribers. Nicky NGTV has produced at least 61 videos for the Navy with 3,500 subscribers.    Just Yoon is a Korean-American who pitches the Navy with 400 videos and 6,500 subscribers.

And what about Archie’s claim that the Army will now be accepting soldiers who score a 21 on the ASVAB enlistment test? The lowest acceptable score for entry into the Army has been a 31 on the ASVAB (Armed Services Vocational Aptitude Battery), which is used in determining the AFQT, or Armed Forces Qualification Test.

According to the ASVAB Concordance Table widely distributed by the US Military Entrance Processing Command in high schools across the county, a score of a 31 on the ASVAB equates to a 690 on the combined critical reading and math sections of the SAT. A 21 on the ASVAB matches up with a 600 combined SAT score.

Meanwhile, Prep Scholar has published an SAT Score to GPA Conversion Table. The table shows that a perfect score of a 1600 aligns with a perfect GPA of 4.0. A 690 matches up with a high school GPA of 1.27, while a 600 represents the bottom of the chart with a 0.00 GPA.  It ain’t good.

According to Dr. Fred Zhang of Prep Scholar, a 700 is the median 8th grade combined score on the SAT, meaning the Army’s minimum ASVAB score of 31 is equivalent to the performance of a below-average 8th grader. New Jersey and New Mexico allow high school students to graduate if they score a 31 on the ASVAB, which they use as an exit exam.

Because the military uses secret “weighted scores” of the ASVAB sub-tests, it’s impossible to exactly calibrate the grade-level of someone who scores a 21, although a 21 is equivalent to about a 4th – 5th –grade level.

Archie explains the ten-point drop in ASVAB scores used to determine eligibility for enlistment. “It went from 31 to 21. The reason being – There is an increase in mission for US Army recruiting. I’m a recruiter and I received this news a few days ago (published 3/4/17). I knew it before it was publicized. I’m not an official Army spokesperson, but we’re gearing up again, for what I don’t know.” Archie elaborated in a follow-up video, “If you score a 21 you must at least be a high school graduate.”

The military’s announcement in November 2016 that it is reviewing a host of enlistment standards demonstrates the extraordinarily difficult time the Pentagon is having to fill its ranks.  It is looking at loosening requirements regarding fitness, weight, tattoos, pot use, and the enlistment of single parents. The Pentagon’s difficulty in recruiting reflects the apparent recruiting-age public’s souring of the prospect of military service under Trump. It also underscores the success of the national movement in countering the aggressive and deceptive recruitment of the nation’s youth.

Lowering ASVAB scores may open the floodgates for soldiers.  It is an uncomfortable truth that American high schools graduate millions of students who have not reached an 8th-grade level of academic proficiency. Apparently, the Army reasons that Forrest Gump might have scored a 21 and he made an excellent soldier.

It is no longer “Join the Army if you fail,” the line popularized by the great Bob Dylan in the 60’s. Instead, it’s “Join the Army if you graduated from high school and still can’t demonstrate on a standardized test you learned anything.”  (No offense to any of my brothers and sisters intended.)

Accepting scores as low as a 21, the bottom of Enlistment Category IV-A, the Army is in more unfamiliar territory, this one that overlaps with a host of general learning disabilities, what we once called mental retardation, characterized by significantly impaired intellectual and adaptive functioning.

It’s time for a national discussion on military recruiting in the United States.