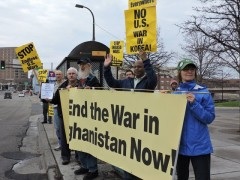 Minneapolis. MN – With only 24 hour’s notice, Minneapolis peace groups organized an emergency response protest against the use a massive U.S. bomb in Afghanistan.

Over 60 people joined the protest held on Friday, April 14. Several people just walking by or waiting for their bus stopped and joined the protest. People in cars, trucks and buses passing by waved and honked in support of the anti-war message.

On Thursday, April 13, it was reported that the Trump administration and the Pentagon unleashed the most powerful U.S. bomb – the 20,000 pound GBU-43, referred to as the ‘mother of all bombs.’ The weapon was used in Afghanistan.

Twin Cities anti-war groups saw this as a major escalation of the U.S. wars and consulted quickly to call an emergency protest against this latest U.S. military move.

Organizers also raised the alarm about the growing danger of a new U.S. war in Korea. News reports had indicated that the Trump administration had plans for an imminent attack on Korea.

The protest was in the West Bank neighborhood of Minneapolis. The neighborhood has many Somali immigrant families.

Participants held signs and banners to make an urgent anti-war statement in the face or what one organizers called “a terrifying event.”

Meredith Aby-Keirstead, of the Anti-War Committee told the crowd, “We need to build a movement to stop Trump. Today’s protest isn’t just about saying no to the use of this new mega bomb in Afghanistan. We are pushing back and demanding that it never be used again. We are concerned that the Trump administration is planning on using this weapon against North Korea. We cannot let Trump think that he is having foreign policy ‘wins’ in Syria, Iraq and Yemen because this will embolden him to attack North Korea and endangers Iran.”

The bomb, officially called the Massive Ordinance Air Blast (MOAB), was used against Islamic State targets in Nangarhar province, Afghanistan. The MOAB has a blast radius of one mile.

The MOAB is said to be the largest non-nuclear weapon in the U.S. arsenal. The chance of civilian casualties is high.

The protest was called by the Minnesota Peace Action Coalition (MPAC).

A statement issued by organizers says in part, “This latest U.S. military escalation by the Trump administration follows the escalating attacks in Yemen, missile attacks on Syria last week, sending thousands of additional U.S. troops to Iraq, Syria and Kuwait, and an increase in the number of civilian deaths in Iraq and Syria from U.S. bombings.”

The statement also points out that “The U.S. has also sent a Naval Strike Force to Korea.”

There is speculation that the use of this weapon in Afghanistan is also intended as a threat to North Korea.

The April 14 protest was organized under the call of, “Enough of the endless wars! Enough of escalation after escalation! No new wars – hands off Korea!”

Chants included “Out of Afghanistan, out of Iraq, hands off Korea and don’t come back.”

“People should be alarmed by this latest escalation, people must speak out against these endless wars,” said one protest organizer.