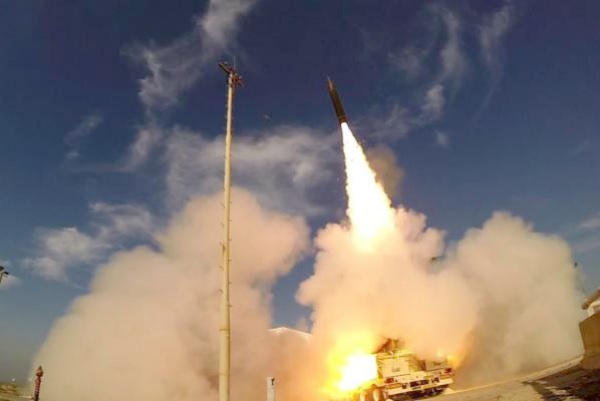 “US Missile Defense Plans to Zap North Korean Threats” was the headline of a USA Today story (7/17/17)—or “US Racing to Quash N. Korean Nuke Threat,” in the print edition.

Strikingly, the piece contains no sources at all substantiating the “N. Korean nuke threat”: “North Korea’s rapid march to develop a nuclear-armed ballistic missile capable of striking the United States” is simply asserted in the lead, and later on the claim that “North Korea may be only a year or so away” from having missiles that “can hit anywhere in the world with a nuclear warhead” is backed up only by “according to US estimates.”

There’s Todd Harrison, director of the Aerospace Security Project at the Center for Security and International Studies (CSIS), who tells USA Today‘s Oren Dorell that “Missile defense buys you time and opens windows.” “BAE Systems, Raytheon, Northrop Grumman and others will design, develop and demonstrate new missile defense capabilities for the US Army.”—UPI (2/10/17)
(photo: US Missile Defense Agency)

That’s not all missile defense buys: Three of the biggest military contractors who shared in a $3 billion contract from the Department of Defense to develop missile defense systems (UPI, 2/10/17) are contributors to CSIS’s national security program, which includes the Aerospace Security Project: Northrop Grumman, which has given more than $200,000 (according to CSIS’s website); Raytheon, which has donated between $100,000 and $199,999; and BAE Systems (formerly British Aerospace and Marconi), which chipped in $35,000–$64,999. (As the New York Times has documented, with CSIS as a prime example, think tank scholars “often push donors’ agendas, amplifying a culture of corporate influence in Washington.”)

There’s also “retired Lt. Gen. Henry ‘Trey’ Obering III, a former head of the Missile Defense Agency who is now executive vice president at Booz Allen Hamilton”; later it’s clarified that Obering “heads the directed energy team at Booz Allen Hamilton”—in other words, his business is to sell to the Pentagon the kind of “smaller, more powerful and lighter” laser-based weapons that he tells USA Today are necessary to protect the United States from the North Korean threat. How quickly that protection will be in place is “based on how much money we’re putting into that program,” Obering says to the paper, sounding rather like a sports car dealer assuring a customer that you get what you pay for.

That’s all the quoted sources that the article has, aside from five words from Kingston Reif of the Arms Control Association, who says that building a missile interception system could create “increased risk of arms racing” with Russia and China. It’s the only note in the article that isn’t completely gung ho about missile defense—and it comes, uncoincidentally, from the only source in the article whose paycheck doesn’t at least partially depend upon missile defense contractors.