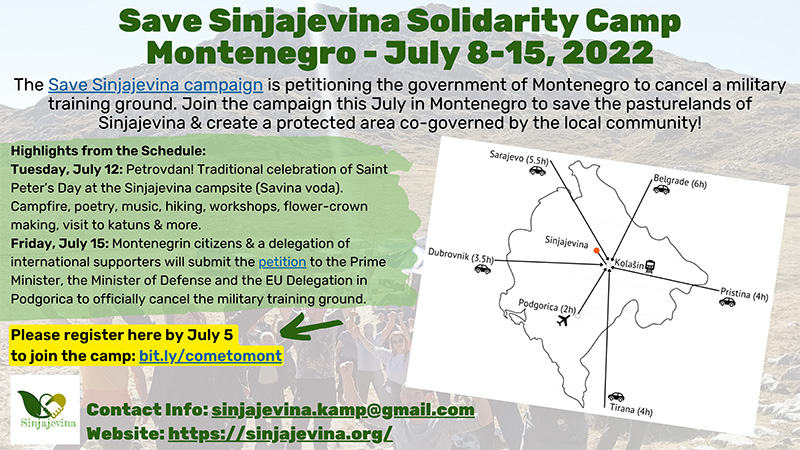 If you want to come, please fill in the form at the bottom of the page by July 5th!

Sinjajevina is the Balkans’ biggest mountain grassland and a place of outstanding beauty. It is used by more than 500 families of farmers and nearly 3,000 people. Many of its pastures are governed communally by eight different Montenegrin tribes, and the Sinjajevina plateau is part of the Tara Canyon Biosphere Reserve at the same time as it is bordered by two UNESCO World Heritage sites.

Nature and local communities in danger:
Now the environment and the livelihoods of those traditional communities are in imminent danger: the Montenegrin government, supported by important NATO allies, established a military training ground in the very heart of these community lands, despite thousands of signatures against it and without any environmental, health, or socio-economic impact assessments. Severely threatening Sinjajevina’s unique ecosystems and local communities, the government has also halted a planned regional park for the protection and promotion of nature and culture, the majority of whose project design cost of almost 300,000 Euros was paid by the EU, and which was included in Montenegro’s official spatial plan until 2020.

European Union must stand with Sinjajevina:
Montenegro wants to be part of the European Union, and EU Commissioner for Neighbourhood and Enlargement, is leading those conversations. The Commissioner must urge the Montenegrin government to meet European standards, close the military training ground, and create a protected area in Sinjajevina, as preconditions to join the EU.

Saving Sinjajevina is a #MissionPossible:
The local people have put their bodies in the way and prevented military exercises on their land — an amazing victory! The movement was awarded the War Abolisher of 2021 Award. But they need our help to make their success permanent and end all efforts to build a NATO military base or training area in Montenegro.

The Petition We Are Delivering

The petition asks for:

Participate in World BEYOND War’s Annual Conference #NoWar2022 from Montenegro or wherever you are!

Camping: Bring your tent and all your camping material! It’s a plastic-free camp. The community will take care of lunch and dinners, but you are welcome to bring additional food for breakfast and snacks. The closest town is Kolašin and it’s one hour drive from the campsite. You can find the camp site here. The campsite doesn’t include showers. There is a small river to have access to water, but it has to remain free of soap.

Arrive in Montenegro by plane, road, or train before 4-5 pm, in order to allow enough time (a bit less than one hour needed) to be driven in daylight on rough trails up to the camp in Sinjajevina. Expect to sleep in tents at 1,800 meters above sea level. If possible bring your sleeping bag and camping mattress, but if not possible, Save Sinjajevina will provide them.

Travel to the Sinjajevina campsite.Installation of the camp. Dinner with community leaders.

For the early birds: cow milking and hiking in the mountains. Workshops about Sinjajevina & connection from the mountains to the online global #NoWar2022 Conference. Campfire: dinner, poetry, & music.

Hike to discover the flora of Sinjajevina and collect flowers for Petrovdan. Visiting the Katun (traditional houses). Crown flower workshops. National campers can leave the camp in the afternoon. International campers are welcome to stay, but Sunday night and Monday are free days.

Preparation day for Petrovdan! Campers who want to give a hand are welcome to stay but no special activities are planned. The community will be preparing Petrovdan.

World BEYOND War Youth Summit at the foothills of Sinjajevina with 20-25 youth from the Balkans. Campers can join some of the activities of the summit, hike in the mountains or discover the nightlife of Podgorica.

This is the most important day to be in Podgorica. Save Sinjajevina, accompanied by 100+ Montenegrin supporters & a delegation of international supporters in representation of different NGOs from around the world will travel to the capital of Montenegro (Podgorica) to submit the petition to: the Prime Minister, the Ministry of Defense, and the EU Delegation in Montenegro to officially cancel the military training ground in Sinjajevina. Early morning transport Kolašin-Podgorica.

The camp is 1,800 meters above sea level. Please bring rain gear, warm clothes, a tent, sleeping bag, camping gear, water bottle, and cutlery. If you don’t have a tent or gear, contact us so we can accommodate you. The community will provide drinking water and lunch and dinner on the 8th, 9th, 10th and 12th. Please bring additional food for breakfast and snacks and for July 11 (free day) (food that does not require refrigeration and cooking). The organization will provide breakfast and snacks known as “shepherd’s snack,” but just in case, bring something to your liking. The campsite doesn’t include showers. There is a river, but it has to remain soap-free.

The campsite is a 1-hour drive north-west from the nearest town of Kolašin. The closest train station is Kolašin and the nearest airport is Podgorica. By car, it is 6h from Belgrade, 5.5h from Sarajevo, 4h from Pristina, 4h from Tirana and 3.5h from Dubrovnik. Please arrive in Kolašin the 8th OR the 11th of July before 5pm, to allow enough time to be driven in daylight on rough trails up to the camp in Sinjajevina.