Remarks Delivered by Pat Elder for World BEYOND War at the No to War No to NATO Summit, Brussels, July 8, 2018 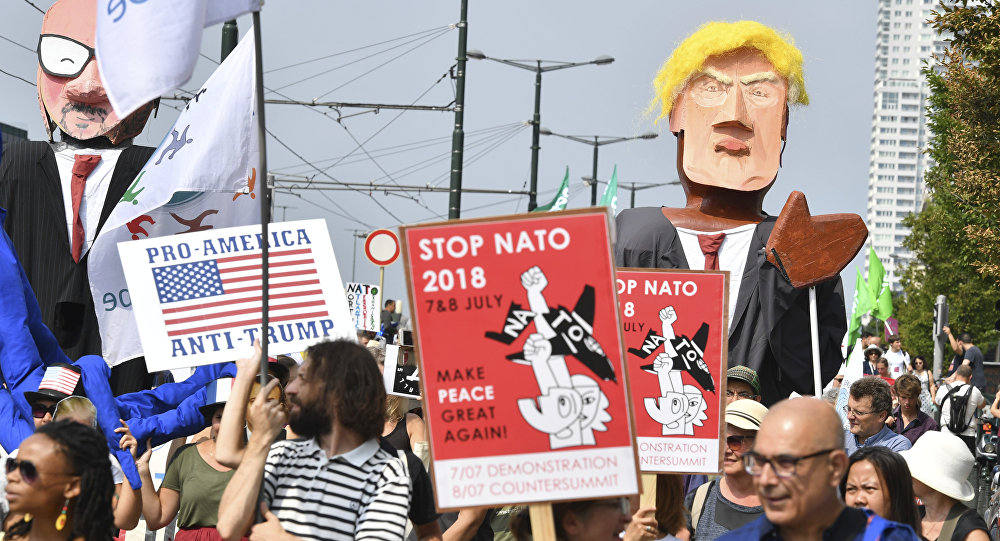 Aren’t there any American flags flying here?  Are we going to salute the troops? Pledge allegiance to the flag? No? What kind of empire is this?

A largely ignorant American public is the propane that fires the stove of Trump’s brand of fascism.

An overwhelming majority of the American public is convinced that Trump is a liar who does not “share their values” or “care about people like them.” At the same time, many believe that he can “get things done.”

The neo-liberal order we loathe involves dumbing down the American public to accept 18th century notions of unbridled capitalism. The high school textbooks glorify war and empire.  God and the flag and the church and the military and Jesus and America and mom and apple pie are mixed in a kind of patriotic pablum that is fed daily to the masses.

And they’re buying it. Trump’s support is up to 42.5%, a remarkable achievement. His support is split between the most ignorant on the one hand and the wealthiest segments of the electorate whose politics are reduced simply to what is best for quarterly shareholder statements, on the other hand. The American capitalists look forward to the continued prospect for lower tax rates and the elimination of regulations that have been in place since Roosevelt that aim to provide a measure of protection to human beings and the environment from the ravages of unbridled capitalism.

Now, all of this is important in helping to understand the newest American monster. It was Lenin who said, “A lie told often enough becomes the truth.” I would say a multitude of lies mixed with statements of truth and sincerity create a cocktail of confusion.  People don’t know what to believe. It is too much for them to consume so they turn it off and it is in that vacuum where Trump operates best. And it’s easy to turn off, just as it is easy to turn on the television for latter-day mind control and programming. Buy this and buy that. Don’t worry about the rest. We’ll tell you what to think.

Trump brilliantly manipulates deeply-held and emotionally powerful beliefs of the American people, especially the notion that Europeans owe the Americans tons of money for all the times the US government bails them out financially.

Here’s Trump regarding the US relationship with European NATO states, “Many of these nations owe massive amounts of money from past years and not paying in those past years.” This is not fair to the people and taxpayers of the United States.” End quote.

Here’s Trump again, “Germany pays far less than they should on NATO & military. Very bad for U.S. This will change.” As Trump put it, “America would support its allies if they fulfill their obligations to us.”

Trump says America pays 90% of NATO’s budget.  “We’d like to help out,” he said.  “But it helps them — they’re in Europe! It helps them a lot more than it helps us. We’re very far away!” end quote.

And, gosh! That’s just not fair. You Europeans are freeloading on us freedom-loving, hard-working Americans. You have socialist economies and you rely on us to defend you and we lend you money when your pathetic systems collapse. Why should Americans have to work so hard to protect you from yourselves and the Russians?  You Europeans have always fought amongst yourselves. We sacrifice so much while our President does what he can to help you.

Nonsense. The military is America’s most trusted institution with three-quarters of the people expressing great confidence.

Trump has said he feels the NATO alliance is “obsolete.” Oh, and he also says he strongly supports Article 5.

It’s predictable how all of this plays out in the minds of the American public. Why should all of those American soldiers fight and die for you ungrateful Europeans? It seems the Europeans don’t appreciate the American sacrifice for their freedom and quality of life. The Americans just aren’t appreciated for what they do for Europe.

At least Secretary-General Jens Stoltenberg appreciates the Americans. “Trump is really having an impact because … allies are now spending more on defense.” Trump is happy to report that Money is “starting to pour into NATO.”

But it is not. And that is a good thing.

When Trump says: buy more weapons and fund more NATO or NATO will be scaled back or disbanded, the correct answer from NATO members should be: yes please, don’t let the doorknob hit you in the ass on your way out.

Think of the sociopathy involved in proposing to fund more war based on a percentage on an economy, so that if you have more money you should fund more war. Think of the decades of propaganda it takes to prevent such a thing sounding crazy.

Back in 2003, when U.S. Secretary of War Donald Rumsfeld threatened to move NATO out of Belgium if Belgium proceeded with legislation that would allow the prosecution of U.S. war criminals, the correct answer from Belgium would have been: Goodbye, Donald, take your death machine with you and the blowback it produces.

When another Donald, the current king of the United States — a country that doesn’t have fancy pretend kings but does give super-royal powers to one lunatic at a time — said NATO’s days might be ended, liberals in the US jumped to NATO’s defense.

The left in the United States is big on promoting hostility toward Russia because they have swallowed a fantasy about Trump and Putin rigging a U.S. election. The proper response should have been fine, shut down NATO.

The United States generates most of the wars and does most of the fighting, but Europe gets the majority of the terrorist blowback. What kind of a deal is that for Europe? War endangers us all; it does not protect us. It is the top drain on our finances, the top destroyer of our natural environment, the top eroder of our liberties, the top corroder of our cultures and teacher of hatred and violence. We need to replace it with useful spending on human and environmental needs, nonviolent global relations, and the rule of law — yes, including prosecutions of war makers even when they are not from Africa. 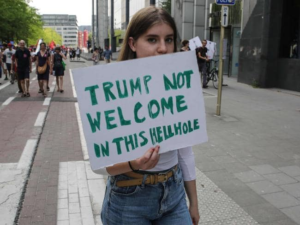 Many in the United States are doing everything they can to oppose the war machine. And many would love for the war machine to lose the cover that NATO gives it. The only reason that the United States is not universally recognized as a rogue criminal enterprise is its junior partners in crime, its coalitions, its so-called international community consisting of a handful of unrepresentative rulers and NATO. And the junior partners join in the wars because of NATO. Canadians are so against U.S. wars that if they had to send soldiers to Afghanistan simply to accompany the United States they might never have done it, but NATO is a different story.

Humanitarian warriors in the United States are completely dependent on NATO as well. Most Americans think that the United Nations authorized a war on Afghanistan in 2001, because NATO in their minds is very muddled with the idea of international legal legitimacy. Just adding NATO to a war, even after the fact, is thought of as more or less the same thing as having had the United Nations on board from the start. A U.S. crime remains a crime when it is perpetrated under NATO. Destroying Libya is no more or less evil or illegal because NATO does it.

The U.S. Congress adores NATO as well, because when a war is labeled a NATO war, the Congress doesn’t have to oversee it or hold anyone accountable for any of the endless atrocities that comprise each war.

But I don’t think anyone loves NATO more than the weapons dealers. We have Pentagon officials openly telling reporters that the new Cold War with Russia is driven by the need for a NATO mission and the need to sell more weapons. But how do you move U.S. troops to Russia’s border through numerous neutral countries? You end their neutrality, that’s how. You use NATO to edge the world toward apocalypse.

If NATO were a European creation, why would Colombia be made part of it? NATO is a tool of U.S. global domination, and it deserves zero support from anyone anywhere in the world. We need boycotts, divestments, and sanctions against the U.S. military and we must begin by ending all cooperation and assistance.

If Trump is shocked to learn that there are lots of U.S. troops in Germany, let’s take that opportunity to get them out, and not to move them to Poland. When U.S. activists lobby the U.S. Congress against new U.S. military bases, the Congress members want to know, “If we don’t put it in your town, where should we put it?” The answer must always be the same: Don’t put it anywhere. Bring the troops home. Give them decent educations and training and peaceful jobs improving the world.

If the United States is intent on hostility with Iran or Russia or North Korea, the rest of the world needs to advance peaceful relations with those nations, not run barking after them like a pack of Tony Blair-like poodles.

How was a massive bombing of Syria prevented in 2013? By public opposition in the United States and in Europe, including in the British Parliament. Now, after more recent attacks on Syria, some in Britain want what the United States has and consistently ignores, namely a legal requirement that only the legislature make war.

Be careful what you ask for.

Our next annual World BEYOND War conference will be on the International Day of Peace, September 21st and 22nd in Toronto, Canada, and you’re all invited.

Then comes November 10th when Trump plans a weapons parade war celebration through the streets of Washington. That’s my town. We’re gonna mess it up.

The next day, November 11th is Armistice Day 100. That holiday was for years said by the U.S. government to be a holiday for peace. It was transformed into a holiday for war in the 1950s. Renamed Veterans Day it became a pro-war celebration in which groups of veterans favoring peace are banned from Veterans Day parades in various cities. This year a large coalition is asking people to come out to resist the weapons parade.

We would also respectfully ask the French not to have any more weapons parades in Paris, at least not when Trump is there.

November 16th to 18th there will be a conference in Dublin, Ireland, with people from all over the world opposing U.S. and NATO military bases and strategizing on how to close them.

This week, by the way, the Irish Parliament took steps to create a Peace, Neutrality and Disarmament Group. Every parliament should have one!

Next April, NATO will turn 50, if we allow it. World BEYOND War is eager to work with anyone on using that occasion to say 50 years is more than enough. No 51st birthday for NATO. No NATO. No collaboration with crime.

It’s time to create a better world together nonviolently. Thank you.