Fact: Defense of freedom, democracy, and life itself, is better accomplished with nonviolent power. Only undemocratic domination over others requires violence and war.

It has become uncommon for war makers to advertise their wars as desirable, and standard policy to claim that every war is entered into as a last resort. This is progress to be very pleased with and to build on. It is possible to show that the launching of any particular war was not, in fact, the last resort, that superior alternatives existed. So, if war is defensible only as a last resort, war is indefensible.

For any war that occurs, and even many that do not, there can be found people who believe at the time, and after, that each particular war is or was necessary. Some people are unconvinced by claims of necessity for many wars, but insist that one or two wars in the distant past were indeed necessary. And many maintain that some war in the future could conceivably be necessary — at least for one side of the war, thus requiring the permanent maintenance of a military ready to fight.

War Is Not “Defense”

The U.S. War Department was renamed the Defense Department in 1947, and it is common in many countries to speak of the war departments of one’s own and all other nations as “defense.” But if the term has any meaning, it cannot be stretched to cover offensive war making or aggressive militarism.  If “defense” is to mean something other than “offense,” then attacking another nation “so that they can’t attack us first” or “to send a message” or to “punish” a crime is not defensive and not necessary.

According to a transcript of a meeting in February 2003 between U.S. President George W. Bush and the Prime Minister of Spain, Bush said that President Saddam Hussein had offered to leave Iraq, and to go into exile, if he could keep $1 billion. A dictator being allowed to flee with $1 billion is not an ideal outcome. But the offer was not revealed to the U.S. public. Instead, Bush’s government claimed a war was needed to defend the United States against weapons that did not exist. Rather than losing a billion dollars, the people of Iraq saw the loss of hundreds of thousands of lives, millions made refugees, their nation’s infrastructure and education and health systems destroyed, civil liberties lost, vast environmental destruction, and epidemics of disease and birth defects — all of which cost the United States $800 billion, not counting trillions of dollars in increased fuel costs, future interest payments, veterans’ care, and lost opportunities — not to mention the dead and injured, increased governmental secrecy, eroded civil liberties, damage to the earth and its atmosphere, and the moral damage of public acceptance of kidnapping, torture, and murder.

War Preparation Is Also Not “Defense”

The same logic that would claim that attacking another nation is “defensive” can be used to try to justify the permanent stationing of troops in another nation. The result, in both cases, is counterproductive, producing threats rather than eliminating them.  Of some 196 nations on earth, the United States has troops in at least 177.  A handful of other nations also have a much smaller number of troops stationed abroad. This is not a defensive or necessary activity or expense.

A defensive military would consist of a coast guard, a border patrol, anti-aircraft weapons, and other forces able to defend against an attack.  The vast majority of military spending, especially by wealthy nations, is offensive. Weapons abroad, on the seas, and in outerspace are not defensive. Bombs and missiles targeting other nations are not defensive. Most wealthy nations, including those with numerous weapons that serve no defensive purpose, spend well under $100 billion each year on their militaries. The extra $900 billion that brings U.S. military spending up to roughly $1 trillion annually includes nothing defensive.

In defining recent wars in Afghanistan and Iraq as non-defensive, have we left out the viewpoint of Afghans and Iraqis? Is it defensive to fight back when attacked? Indeed, it is. That is the definition of defensive. But, let’s remember that it is promoters of war who have claimed that defensiveness makes a war justified. Evidence shows that the most effective means of defense is, far more often than not, nonviolent resistance. The mythology of warrior cultures suggests that nonviolent action is weak, passive, and ineffective at solving large-scale social problems. The facts show just the opposite. So it is possible that the wisest decision for Iraq or Afghanistan would have been nonviolent resistance, non-cooperation, and appeal to international justice.

Such a decision is all the more persuasive if we imagine a nation like the United States, with great control over international bodies like the United Nations, responding to an invasion from abroad.  The people of the United States could refuse to recognize the foreign authority.  Peace teams from abroad could join the nonviolent resistance.  Targeted sanctions and prosecutions could be combined with international diplomatic pressure. There are alternatives to mass violence.

Here is a list of successful uses of unarmed nonviolent action in place of war.

The important question, however, is not how the nation attacked should respond, but how to prevent the aggressive nation from attacking. One way to help do that would be to spread awareness that war making endangers people rather than protecting them.

Denying that war is necessary is not the same as failing to recognize that there is evil in the world. In fact, war needs to be ranked as one of the most evil things in the world. There is nothing more evil that war can be used to prevent. And using war to prevent or punish the making of war has proven a dreadful failure.

War mythology would have us believe that war kills evil people who need to be killed to protect us and our freedoms. In reality, recent wars involving wealthy nations have been one-sided slaughters of children, the elderly, and ordinary residents of the poorer nations attacked. And while “freedom” has served as a justification for the wars, the wars have served as a justification for curtailing actual freedoms.

The idea that you could gain rights by empowering your government to operate in secret and to kill large numbers of people only sounds reasonable if war is our only tool. When all you have is a hammer, every problem looks like a nail. Thus wars are the answer to all foreign conflicts, and disastrous wars that drag on too long can be ended by enlarging them.

Preventable diseases, accidents, suicides, falls, drowning, and hot weather kill many more people in the United States and most other nations than does terrorism.  If terrorism makes it necessary to invest $1 trillion a year in war preparations, what does hot weather make it necessary to do?

The myth of a great terrorist threat is wildly inflated by agencies like the FBI that regularly encourage, fund, and entrap people who could never have managed to become terrorist threats on their own.

A study of real motivations for wars makes clear that necessity hardly figures into the decision making process, other than as propaganda for the public.

“Population Control” by Mass-Murder Is Not a Solution

Among those who recognize how damaging war is, there exists another mythical justification for this peculiar institution: war is needed for population control.  But the planet’s capacity to limit human population is beginning to show signs of functioning without war.  The results will be horrible.  A solution might be to invest some of the vast treasure now dumped into war into the development of sustainable lifestyles instead.  The idea of using war to eliminate billions of men, women, and children almost renders the species that could think that thought unworthy of preserving (or at least unworthy of criticizing Nazis); fortunately most people cannot think anything so monstrous.

“Anthony Eden, Britain’s foreign secretary, who’d been tasked by Churchill with handling queries about refugees, dealt coldly with one of many important delegations, saying that any diplomatic effort to obtain the release of the Jews from Hitler was ‘fantastically impossible.’ On a trip to the United States, Eden candidly told Cordell Hull, the secretary of state, that the real difficulty with asking Hitler for the Jews was that ‘Hitler might well take us up on any such offer, and there simply are not enough ships and means of transportation in the world to handle them.’ Churchill agreed. ‘Even were we to obtain permission to withdraw all the Jews,’ he wrote in reply to one pleading letter, ‘transport alone presents a problem which will be difficult of solution.’ Not enough shipping and transport? Two years earlier, the British had evacuated nearly 340,000 men from the beaches of Dunkirk in just nine days. The U.S. Air Force had many thousands of new planes. During even a brief armistice, the Allies could have airlifted and transported refugees in very large numbers out of the German sphere.”[vii]

Perhaps it does go to the question of “Right Intention” that the “good” side of the war simply did not give a damn about what would become the central example of the badness of the “bad” side of the war.

[x] Dave Grossman, On Killing: The Psychological Cost of Learning to Kill in War and Society (Back Bay Books: 1996).

[xv] RootsAction.org, “Move Away from Nonstop War. Close the Ramstein Air Base,” http://act.rootsaction.org/p/dia/action3/common/public/?action_KEY=12254

List of Successful Nonviolent Actions in Place of Wars 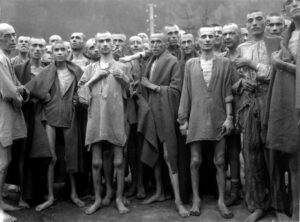 As U.S. Ships Immigrants Around, Ken Burns Claims He’s Going to Tell the Truth About the Holocaust 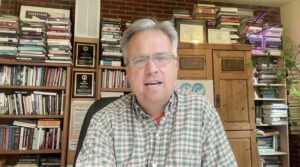 Talk World Radio: What to Do About Ukraine 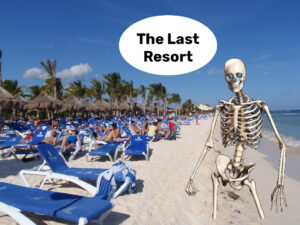 The Hard Work of Creating a Last Resort War on Iran 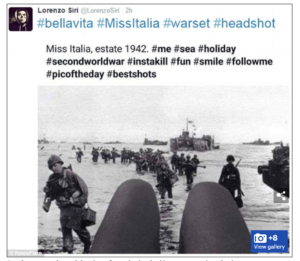 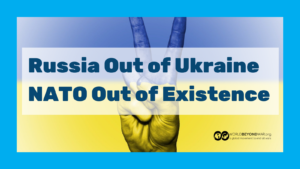 Learning the Wrong Lessons from Ukraine 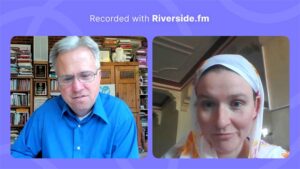 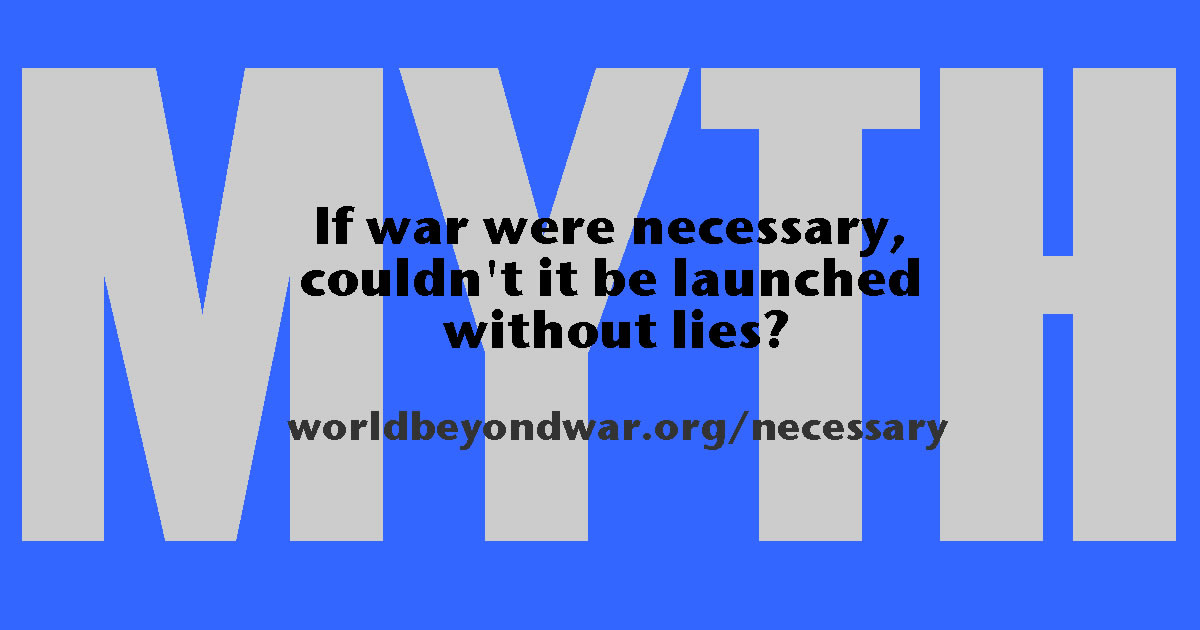