by Kevin Zeese and Margaret Flowers, February 5, 2018, via Global Research.

This week, following the recent announcement of a new National Defense Strategy that focuses on conflicts with great powers and a new arms race, the Pentagon announced an escalation of nuclear weapons development. The United States’ military is spread across the world, including several dangerous conflict areas that could develop into an all-out war, possibly in conflict with China or Russia. This comes at a time when US empire is fading, something the Pentagon also recognizes and the US is falling behind China economically. This is not unexpected considering that one year ago President Trump sought an inaugural parade that put tanks and missiles on display.

The new National Defense Strategy announced last week moves from the ‘war on terror’ toward conflict with great powers. Michael Whitney, writing about the conflict in Syria, puts it in context:

“Washington’s biggest problem is the absence of a coherent policy. While the recently released National Defense Strategy articulated a change in the way the imperial strategy would be implemented, (by jettisoning the ‘war on terror’ pretext to a ‘great power’ confrontation) the changes amount to nothing more than a tweaking of the public relations ‘messaging’. Washington’s global ambitions remain the same albeit with more emphasis on raw military power.”

Bacevich writes the ‘new’ strategy is placed in the false claim that the US is “emerging from a period of strategic atrophy.” The claim is laughable as the US has been in never ending war with massive military spending throughout the century:

“Under Presidents George W. Bush, Barack Obama, and now Donald Trump, U.S. forces have been constantly on the go. I’m prepared to argue that no nation in recorded history has ever deployed its troops to more places than has the United States since 2001. American bombs and missiles have rained down on a remarkable array of countries. We’ve killed an astonishing number of people.”

The new strategy means more spending on weapons to prepare for conflict with Russia and China. Not bothering with reality, Secretary of Defense Jim Mattis claimed,

“Our competitive edge has eroded in every domain of warfare—air, land, sea, space, and cyberspace. And it is continually eroding.”

He described the Pentagon’s plans for ‘procurement and modernization’, i.e. the arms race that includes nuclear, space and traditional weapons, cyber defense and more surveillance.

The Pentagon announced its Nuclear Posture Review on February 2, 2018. The review calls for updating and expanding the nuclear arsenal in order to respond to perceived threats, in particular by “great powers,” e.g. Russia and China, as well North Korea and others. Peace Action described a review written by Dr. Strangeglove, adding

“the expansion of our nuclear arsenal called for in the Nuclear Posture Review would cost the American taxpayers an estimated $1.7 trillion adjusted for inflation over the next three decades.”

“Who will celebrate the National Defense Strategy? Only weapons manufacturers, defense contractors, lobbyists, and other fat cat beneficiaries of the military-industrial complex.”

To further the glee of weapons makers, Trump is urging the State Department to spend more time selling US weapons.

In his first year as president, Donald Trump handed over decision-making power to “his generals” and as expected, this  resulted in more “warfare, bombing and deaths” in his first year than the Obama era. There has been “an almost 50 percent increase of airstrikes in Iraq and Syria during Trump’s first year in office, leading to a rise in civilian deaths by more than 200 percent compared with the year before.” Trump has also broken the record for special forces, now deployed in 149 countries or 75 percent of the globe. So much for ‘America First.’

Many areas risk escalation to full-scale war, including conflict with Russia and China: 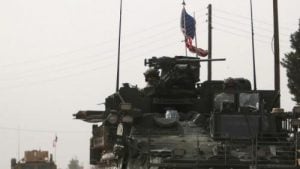 Syria: The seven-year war in Syria, which has killed 400,000 people, began during Obama’s presidency under the guise of destroying ISIS. The real goal was removal of President Assad. This January, Secretary of State Tillerson made the goal clear, saying that even after the defeat of ISIS the US would stay in Syria until Assad was removed from office. The US is moving to Plan B, the creation of a de facto autonomous Kurdish state for almost one-third of Syria defended by a proxy military of 30,000 troops, mainly Kurds. Marcello Ferrada de Noli describes that in response, Syria aided by Russia, Iran and Hezbollah “continues victorious and unabated in its pursuit to retake the full sovereignty of its nation’s territory.” Turkey is moving to ensure no Kurdish territory is created by the US.

North Korea: The latest dangerous idea coming from the Trump military is giving North Korea a “bloody nose.” This schoolyard bully talk risks a US first strike that could create war with China and Russia. China has said if the US attacked first it would defend North Korea. This aggressive talk comes when North and South Korea seek peace and are cooperating during the Olympics. The Trump era has continued massive military exercises, practicing attacks on North Korea that include nuclear attacks and assassination of their leadership.The US did take a step back and agree not to hold such war games during the Olympics.

Iran: The US has sought regime change since the 1979 Islamic Revolution removed the US’s Shah of Iran. The current debate over the future of the nuclear weapons agreement and economic sanctions are focal points of conflict. While observers find Iran has lived up to the agreement, the Trump administration continues to claim violations. In addition, the US, through USAID, the National Endowment for Democracy and other agencies, is spending millions annually to build opposition to the government and foment regime change, as seen in recent protests. In addition, the US (along with Israel and Saudi Arabia) is engaged in conflict with Iran in other areas, e.g. Syria and Yemen. There is regular propaganda demonizing Iran and threatening war with Iran, which is six times the size of Iraq and has a much stronger military. The US has been isolated in the UN over its belligerence toward Iran. 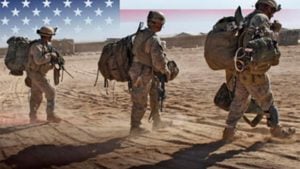 Afghanistan: The longest war in US history continues after 16 years. The US has been hiding what is happening in Afghanistan because the Taliban has an active presence in about 70 percent of the country and ISIS has gained more territory than ever before resulting in the Inspector General for Afghanistan criticizing DoD for refusing to release data. The long war included Trump dropping the largest non-nuclear bomb in history and resulted in allegations of US war crimes that the International Criminal Court seeks to investigate. The US has caused devastation throughout the country.

Ukraine: The US supported coup in the Ukraine continues to cause conflicts on the Russian border. The US spent billions on the coup, but documents outlining the Obama administration’s involvement have not been released. The coup was complete with Vice President Biden’s son and John Kerry’s long term financial ally being put on the board of the Ukraine’s largest private energy company. A former State Department employee became Ukraine’s finance minister. The US continues to claim Russia is the aggressor because it protected its Navy base in Crimea from the US coup. Now, the Trump administration is providing arms to Kiev and stoking a civil war with Kiev and western Ukraine against eastern Ukraine.

These are not the only areas where the US is creating regime change or seeking domination. In another strange statement, Secretary of State Tillerson warned Venezuela may face a military coup while winking that the US does not support regime change (even though it has been seeking regime change to control Venezuelan oil since Hugo Chavez came to power). Tillerson’s comment came as Venezuela negotiated a settlement with the opposition. Regime change is the mode of operation for the US in Latin America.  The US  supported recent questionable elections in Honduras, to keep the coup government Obama supported in power. In Brazil, the US is assisting the prosecution of Lula, who seeks to run for president, in a crisis that threatens its fragile democracy protecting a coup government.

In Africa, the US has military in 53 of 54 countries and is in competition with China, which is using economic power rather than military power. The US is laying the groundwork for military domination of the continent with little congressional oversight — to dominate the land, resources and people of Africa.

Opposition to War and Militarism

The anti-war movement, which atrophied under President Obama, is coming back to life.

World Beyond War is working to abolish war as an instrument of foreign policy. Black Alliance for Peace is working to revitalize opposition to war by blacks, historically some of the strongest opponents of war. Peace groups are uniting around the No US Foreign Military Bases campaign that is seeking to close 800 US military bases in 80 countries. 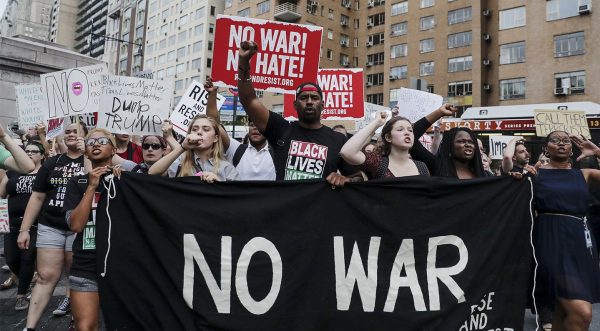 Peace advocates are organizing actions. The campaign to divest from the war machine kicks off from February 5 to 11 highlighting the economic cost of war. A global day of action against the US occupation of Guantanamo Bay is being planned for February 23, the anniversary of the US seizing Guantanamo Bay from Cuba through a “perpetual lease” beginning in 1903. A national day of action against US wars at home and abroad is being planned for April. And Cindy Sheehan is organizing a Women’s March on the Pentagon.

There are many opportunities to oppose war in this new era of “Great Power” conflict. We urge you to get involved as you are able to show that the people say “No” to war.

This article was originally published by PopularResistance.org.