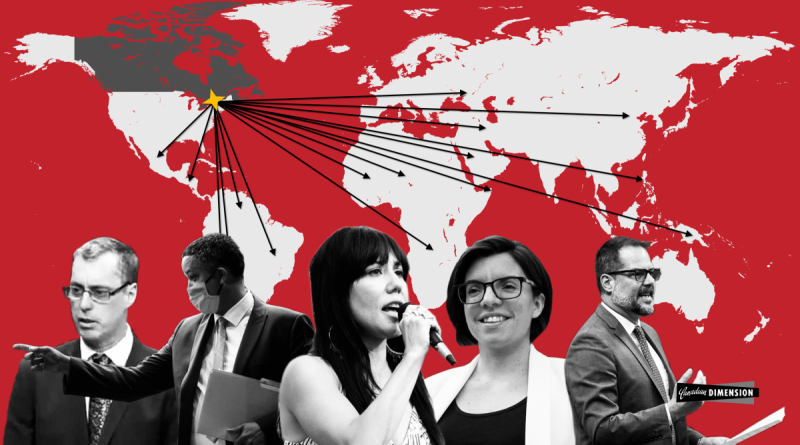 “Thank you Mr. Speaker,” said Manly. “Canada has failed to meet our commitments to foreign aid, we have failed to meet our commitments to climate action, we are the 15th largest arms exporting nation, we are considering purchasing offensive F-35 stealth fighter jets, we have engaged in NATO wars of aggression and regime change, we haven’t signed the Treaty on the Prohibition of Nuclear Weapons and we recently failed to gain a seat on the UN Security Council. Will the government conduct a full review of Canadian foreign policy and the role this country plays in world affairs. On foreign affairs we are getting an F.”

It is rare to hear this type of multi-issue, progressive critique of Canadian foreign policy in the House of Commons. The foreign affairs minister’s unwillingness to respond directly highlights the importance of bringing this message to the seat of decision-making in this country. François-Philippe Champagne’s pivot to discussing “Canada’s leadership” role in defending democracy and human rights in places offside with Washington is unlikely to convince many that Canada’s foreign policy deserves passing marks.

Alongside three other MPs, several former MPs and 50 non-governmental organizations, Manly endorsed the Canadian Foreign Policy Institute’s call for a “fundamental reassessment of Canadian foreign policy.” This came on the heels of Canada’s second consecutive defeat for a seat on the United Nations Security Council in June. The letter offers 10 questions as the basis of a wide-ranging discussion on Canada’s place in the world, including whether Canada should remain in NATO, continue backing mining firms abroad, or maintain its close alignment with the United States.

Manly is at the forefront of a new group of progressive MPs—a ‘squad,’ if you like—willing to directly challenge the government on international affairs. New NDP MPs Matthew Green and Leah Gazan, joined by longer standing members Niki Ashton and Alexandre Boulerice, have shown the courage to call out Canada’s pro-Washington and corporate positions. In an August webinar on Bolivia, for instance, Green called Canada “an imperialist, extractivist country” and said “we ought not be a part of a pseudo-imperialist group like the Lima Group” targeting Venezuela.

The forcefulness of Green and Manly’s interventions are likely a reaction to Ottawa’s defeat in its bid for a seat on the Security Council. The Trudeau government’s loss at the UN was a clear signal from the international community that it does not embrace Canada’s pro-Washington, militaristic, mining-focused, and anti-Palestinian policies.

Another dynamic likely emboldening the ‘squad’ are the combined efforts of activists across the country. The Canadian Latin American Alliance, for instance, is a critical new voice, joining more established groups focused on the region such as Common Frontiers and the Canadian Network on Cuba. The anti-war movement has been increasingly active as well, with World Beyond War strengthening its presence in Canada and the Canadian Peace Congress re-emerging.

The recent commemoration of the 75th anniversary of the atomic bombing of Japan together with the UN Nuclear Ban Treaty achieving its ratification threshold has further galvanized the nuclear abolition movement. More than 50 organizations have endorsed an upcoming webinar hosted by the Canadian Foreign Policy Institute titled “Why hasn’t Canada signed the UN nuclear ban treaty?” The event will feature Hiroshima survivor Setsuko Thurlow and numerous Canadian MPs including former Green Party leader Elizabeth May.

Perhaps more than any other issue, the Liberals’ refusal to sign the Treaty on the Prohibition of Nuclear Weapons (TPNW) highlights the tremendous gap between what the Trudeau government says and what it does on the global stage. While the government claims to believe in an international rules-based order, a feminist foreign policy, and the need to rid the world of nuclear weapons, it still has not added its signature to the TPNW, a framework that advances all three of these stated principles.

As I have detailed elsewhere, this aversion to the TPNW may be starting to cost the government, while even more obscure issues are now highlighting the shortcomings of their foreign policy positions. The recent Bolivian election, for example, was a clear rejection of Canada’s tacit support of the ouster of Indigenous President Evo Morales last year.

The Liberals’ lack of internationalist principles was on full display when their immediate reaction to Donald Trump’s election loss was to pressure US President-elect Joe Biden to maintain the worst of Trump’s policies. In Biden’s first call with a foreign leader, Prime Minister Trudeau raised Keystone XL—this on the heels of a statement by Foreign Minister Champagne who said approving the pipeline was “top of the agenda.”

The yawning gap between the Trudeau government’s lofty rhetoric and its international policies offers tremendous fodder for progressive politicians willing to raise their voice. For internationalist minded thinkers and activists outside of parliament, it is important that we seek to create opportunities for Manly and the rest of the ‘squad’ to challenge the government’s foreign policy.

Bianca Mugyenyi is an author, activist and director of the Canadian Foreign Policy Institute. She is based in Montréal.