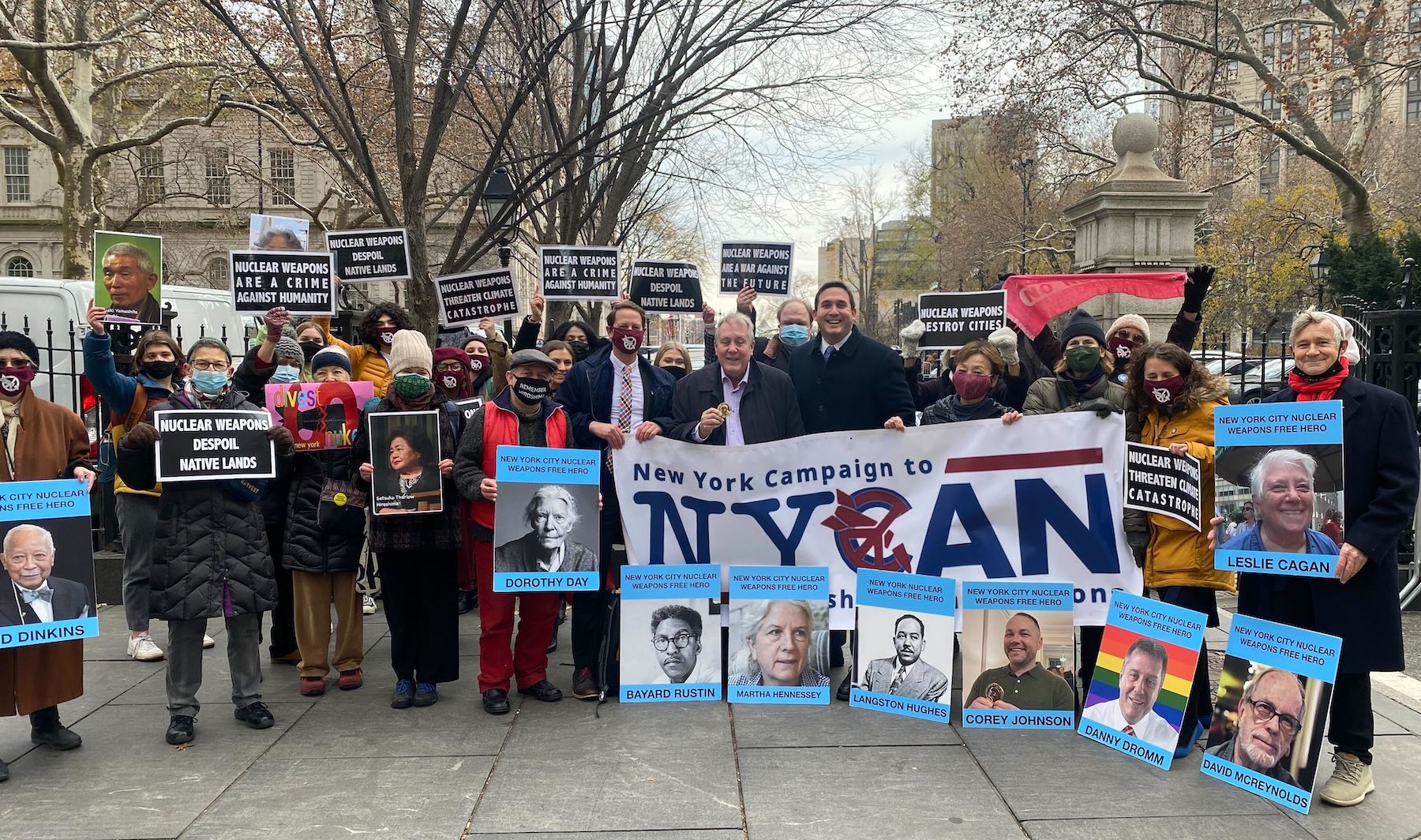 The comprehensive legislation adopted by New York City Council on 9 December 2021, calls on NYC to divest from nuclear weapons, establishes a committee responsible for programming and policy related to NYC’s status as a nuclear-weapons-free zone, and calls on the US government to join the Treaty on the Prohibition of Nuclear Weapons (TPNW).

Today, New York City joined hundreds of cities in the U.S. and around the world that have called on their national governments to join the TPNW. This commitment is especially meaningful in light of NYC’s legacy as the city where nuclear weapons began, and in light of the ongoing impact that the Manhattan Project and the nuclear weapons industry continues to have on communities throughout NYC’s boroughs.

But this powerful package of legislation couples the ICAN Cities Appeal with even more consequential legal obligations for New York, for example:

The lead sponsor of the legislation, Council Member Daniel Dromm, stated: “My legislation will send a message to the world that New Yorkers will not remain idle under the threat of nuclear annihilation. We seek to right the wrongs of nuclear harms in our city by divesting funds, upholding international law, and remediating the environmental damage produced by the Manhattan Project.”

“I am thrilled that this legislation aligns NYC’s pensions with our progressive values,” says Robert Croonquist, a retired NYC public school teacher, and founder of ICAN Partner Organization Youth Arts New York/Hibakusha Stories. “I did not spend my adult life investing in the future of our City’s youth only to have my pension invested in their destruction.”

The Manhattan Project, in which the U.S. developed the atomic bombs used to kill 200,000 people in Hiroshima and Nagasaki in 1945, was initiated in an office building opposite the very City Hall where this legislation was adopted. In the course of Manhattan Project activities, the U.S. Army weaponized a nuclear research program at Columbia University, even pressing into service the university’s football team to move tons of uranium.

During the Cold War, the U.S. military built a ring of nuclear weapon missile bases in and around NYC, housing approximately 200 warheads, making NYC more of a target for attacks.

Today, NYC communities continue to be affected by the legacy of the Manhattan Project. Radioactive materials were handled at 16 sites throughout NYC, including university labs, contractor warehouses, and transit points. Six of those sites, concentrated in marginalized communities, have required environmental remediation, and in some cases this remediation is ongoing.

In addition, NYCAN estimates that NYC public pension funds today have approximately $475 million invested in nuclear weapons producers. This represents less than 0.25% of the City pension funds’ holdings, however, and these holdings generally underperform socially responsible investments. Notably, Brad Lander, who is Comptroller-elect, co-sponsored Res. 976 (calling for the Comptroller to divest). In his explanation of vote, on 9 December 2021, he stated that “I pledge as New York City Comptroller to work with this community and explore the process of the divestment of the New York City pension from the sale and movement of nuclear weapons.”

For decades, New Yorkers have protested the nuclearization of their city. John Hersey’s 1946 account of the humanitarian impact of the atomic bombing, Hiroshima, was first published in The New Yorker. Dorothy Day, founder of the Catholic Worker, faced arrest for disobeying civil defense drills. Women Strike for Peace marched against nuclear testing, launching the political career of future U.S. Representative Bella Abzug. Former NYC Mayor David Dinkins joined activists in successfully scuttling plans to make Staten Island a nuclear-capable Navy port. And in 1982, more than a million people marched for nuclear disarmament in NYC, one of America’s largest ever protests. In 1983, the NY City Council passed a resolution first declaring NYC a Nuclear-Weapons-Free Zone. All nuclear weapons bases within its territory have since been decommissioned, and the Navy reportedly avoids bringing nuclear-armed and nuclear-powered ships into the Harbor.

In 2018, NYC-based members of ICAN launched the New York Campaign to Abolish Nuclear Weapons (NYCAN). NYC activist Brendan Fay connected Dr. Kathleen Sullivan (Director of ICAN Partner Hibakusha Stories) with Council Member Daniel Dromm, who then helped organize a letter, co-signed by 26 additional Council Members, to NYC Comptroller Scott Stringer. The letter requested that Stringer “align our city’s financial power with our progressive values” and direct NYC’s pension funds to divest from investments in companies profiting from nuclear weapons. NYCAN then initiated meetings with the Comptroller’s office to discuss pathways for next steps, publishing a report in the process.

In January 2020, at a joint hearing for both pieces of the legislation, 137 members of the public testified and submitted more than 400 pages of written testimony, reaffirming deep support for nuclear disarmament and highlighting the voices of NYC pension holders, indigenous leaders, religious leaders, artists, and hibakusha (survivors of the atomic bombings).

Adoption of the legislation

The legislation languished in Committee throughout 2020 and 2021, while NYC, like so many cities, struggled to manage the effects of the COVID-19 pandemic. But NYCAN continued to advocate, partnering with ICAN partner organisations and other NYC activists, including local direct action group Rise and Resist. These actions included honoring the solemn anniversary of the bombing of Hiroshima and Nagasaki, coordinating to light up NYC skyscrapers to mark the entry into force of the TPNW, marching in the annual Pride parade, and even engaging in a New Year’s Day polar plunge for nuclear disarmament in the icy cold Atlantic Ocean on Rockaway Beach.

Adoption of the legislation

The legislation languished in Committee throughout 2020 and 2021, while NYC, like so many cities, struggled to manage the effects of the COVID-19 pandemic. But NYCAN continued to advocate, partnering with ICAN partner organisations and other NYC activists, including local direct action group Rise and Resist. These actions included honoring the solemn anniversary of the bombing of Hiroshima and Nagasaki, coordinating to light up NYC skyscrapers to mark the entry into force of the TPNW, marching in the annual Pride parade, and even engaging in a New Year’s Day polar plunge for nuclear disarmament in the icy cold Atlantic Ocean on Rockaway Beach.

With only weeks remaining in the legislative session, in November 2021, City Council Speaker Corey Johnson agreed to join NYCAN at a small reception hosted by Dr. Sullivan, Blaise Dupuy, and Fay, to honor Irish diplomat Helena Nolan, a key leader in the negotiation of the TPNW, for her new appointment as Irish Consul General in NYC. Affected by presentations made by NYCAN that night, including from Dr. Sullivan, Fay, Seth Shelden, and Mitchie Takeuchi, the Speaker stated that he would help ensure that the legislation would be adopted.

On 9 December 2021, the legislation was adopted by a super-majority of the City Council. The legislation asserts that “New York City has a special responsibility, as a site of Manhattan Project activities and a nexus for financing of nuclear weapons, to express solidarity with all victims and communities harmed by nuclear weapons use, testing and related activities”.

With this meaningful action, NYC has created a powerful legislative model for other local governments. Today, NYC not only offers political support for the U.S. to join the TPNW, but also takes consequential steps to create a city and a world safe from the threat of these weapons of mass destruction.