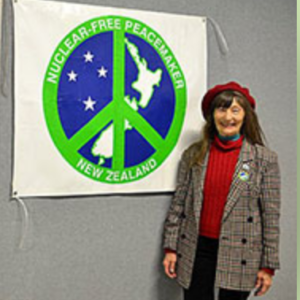 A Glen Eden granny is hoping to attend the ‘NO WAR 2018’ conference in Toronto this 21st September. She is more determined than ever to challenge the formidable power of the military/industrial warfare business by joining forces with the ‘World BEYOND War’ organisation.

West Aucklander Laurie Ross has been a dedicated peace activist for over 37 years helping to achieve the New Zealand Nuclear Free Zone and Disarmament Act of 1987.

Since then she has focussed on work for developing NZ Defence and Foreign policy based on Peacemaking, Peacekeeping and Peacebuilding. This continues the work of her father Larry Ross who championed the NZ Nuclear Free Zone Committee and Peacemaking Association which spearheaded the campaign.

She says ‘I am doing this for everyone’s grandchildren. Adults need to protect children from war by rejecting the old warfare culture and ideology. This means we must dramatically reduce the production, promotion and profit from the guns/bombs, war and violence culture in global society. We must clearly present the defence ‘Alternatives to War’ and mobilise People for Peace’

Laurie has also been creating Peace events that demonstrate ‘Peace Culture’, for example, concerts, films and meetings with highly qualified speakers on alternatives to warfare and violence.

Her last big event was the 2017 Nuclear Free NZ 30th anniversary celebration in Auckland Domain, with the Auckland Mayor for Peace, in which hundreds of people formed a giant human CND Peace symbol, photographed from the air to send a message of hope ‘From a Nuclear Free NZ for a Nuclear Free World‘. See www.NuclearFreePeacemakers.org.nz

This event was timed for the landmark achievement of the UN Treaty for Prohibition of Nuclear Weapons by 122 nations last year. This was due to hundreds of NGOs collaborating around the Humanitarian Consequences of Nuclear Weapons Conferences which demanded that nuclear weapons be abolished.

NZ was in the vanguard of negotiations and among the first 50 nations to sign the TPNW in September 2017. Now the NZ government has worked through parliamentary process for agreement by all parties and ratified the Treaty on 31st July 2018.

However there is still a lot more work to be done to remove the threat of nuclear annihilation and the horror of conventional warfare. Thus, Laurie works with the NZ Peace Foundation which delivers Peace Education in schools programme. She also is a member of their International Affairs and Disarmament Committee who provide regular advocacy to the Minister of Foreign Affairs and Disarmament.

Here’s how you can help:
https://givealittle.co.nz/cause/help-get-laurie-ross-to-the-world-beyond-war