Its been nine Christmas and New Year’s holidays that we in Hawaii have been challenging policies of the Obama administration—beginning in December 2008 before President-elect Obama was sworn into office– on the issue of his silence on the 27-day Israeli attack on Gaza that killed 1400 Palestinians.

The vigil has continued for the each of the past nine holidays with members of social justice organizations in Honolulu including Veterans for Peace, Hawaii Peace and Justice and World Can’t Wait have come to President Obama’s holiday home.

The signs that have been carried in the back of my car to the vigils over the years reflect the variety of issues about which we have expressed our concern.  The posters “Close Guantanamo,” “Stop Torture” and “Help Gaza” are tattered and worn after nine years of use.  “Stop Assassin Drones,”  “Drones Kill Kids” and “Fire Liar John Brennan” signs are not quite so worn, but do reflect the horrific extrajudicial murders authorized personally by President Obama beginning early in his administration. 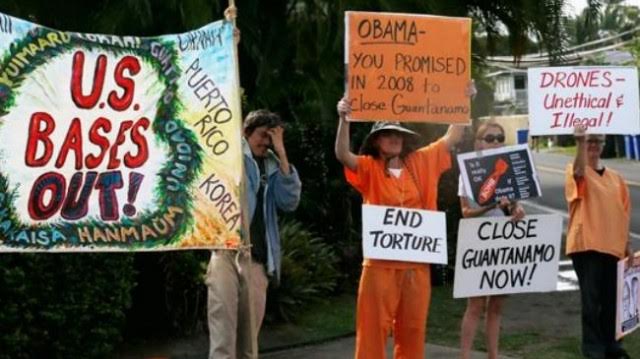 After three years in which he was in pre-trial confinement, the “Free Bradley Manning” signs changed to “Clemency for Chelsea Manning” after Manning was tried by military courts martial and announced her gender transformation the day after her conviction.

“End Illegal Government Surveillance,” “Stop the War on Whistleblowers,” “Free Julian Assange,” “Listen to Edward Snowden” and signs for whistleblowers Jon Kiriakou and Jeffery Sterling imprisoned by the Obama administration’s war on whistleblowers have been held in front of Obama’s motorcade as it left the presidential compound in Kailua, Oahu, Hawaii.

“Close U.S. Bases in Okinawa,” “Stop Construction at Henoko and Takae,” “Save Article 9-NO WAR, ”Stop Osprey Widow maker,” “No more Rapes in Okinawa” are signs for campaigns in solidarity with people in Okinawa. 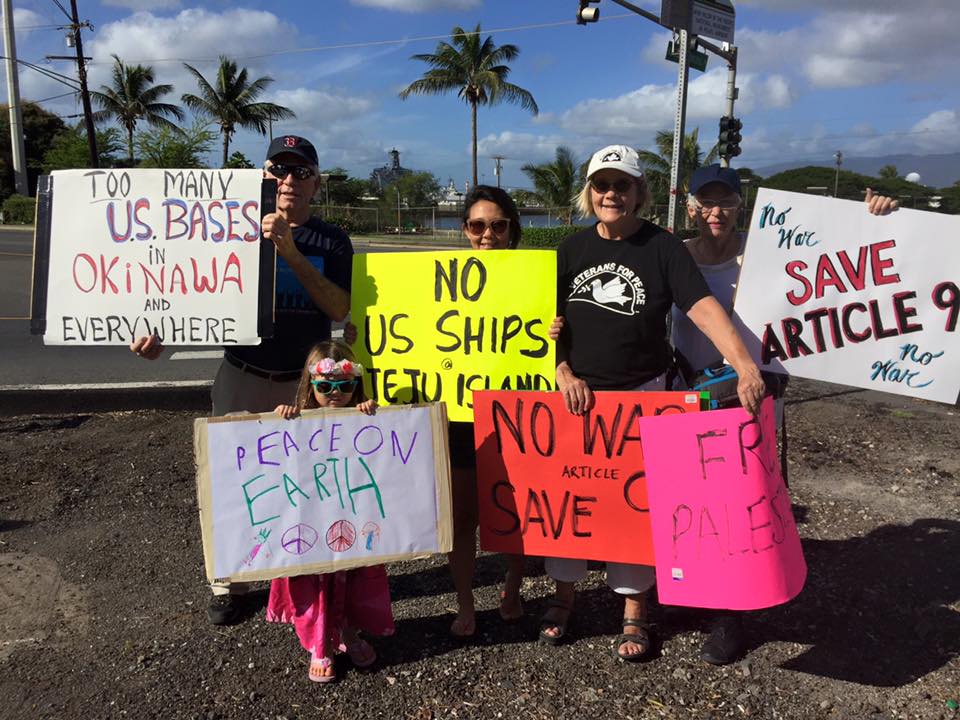 “Save Jeju Island,” “Stop Aegis Missiles” have been posters in solidarity with activists on Jeju Island, South Korea in support of their valiant attempt to stop construction of a naval base in a pristine marine area at the behest of the U.S. government that wants to have another military base in South Korea.

This year we added new signs based on the Obama administration’s abstention during the vote at the United Nations condemning illegal Israeli settlements, in which the US abstention allowed the vote on the resolution to take place: “Good Stance on the UN Vote,” and “Now Recognize Palestine.” 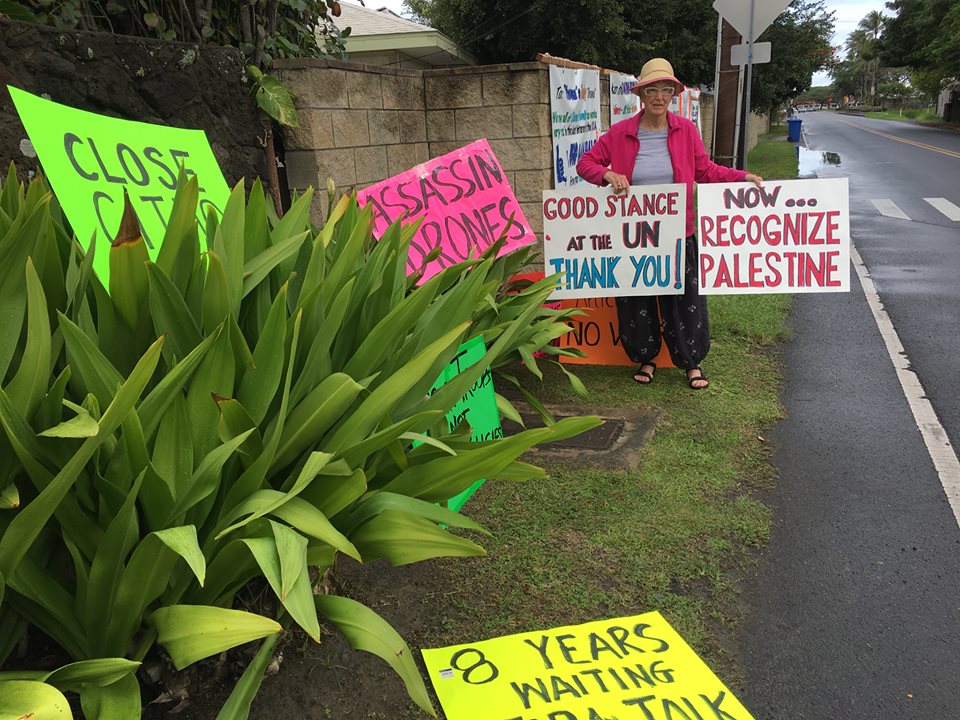 This year as always, I went to the guard tent at the entrance to the compound to say hello to the Secret Service and Honolulu police detail.  Over the years we have gotten to know some of the Secret Service agents and even run into them in Washington, DC.  This year, Obama’s last year, a new group was at the entrance.  In introducing myself I mentioned that we had been coming to the Obama compound for nine years and that we were very concerned about a variety of policies of the Obama administration.  Reminding us how many years we have been outside the Presidential holiday compound, one young Honolulu police officer was taken aback and said, “Gosh, I was in elementary school nine years ago when you started coming here.” 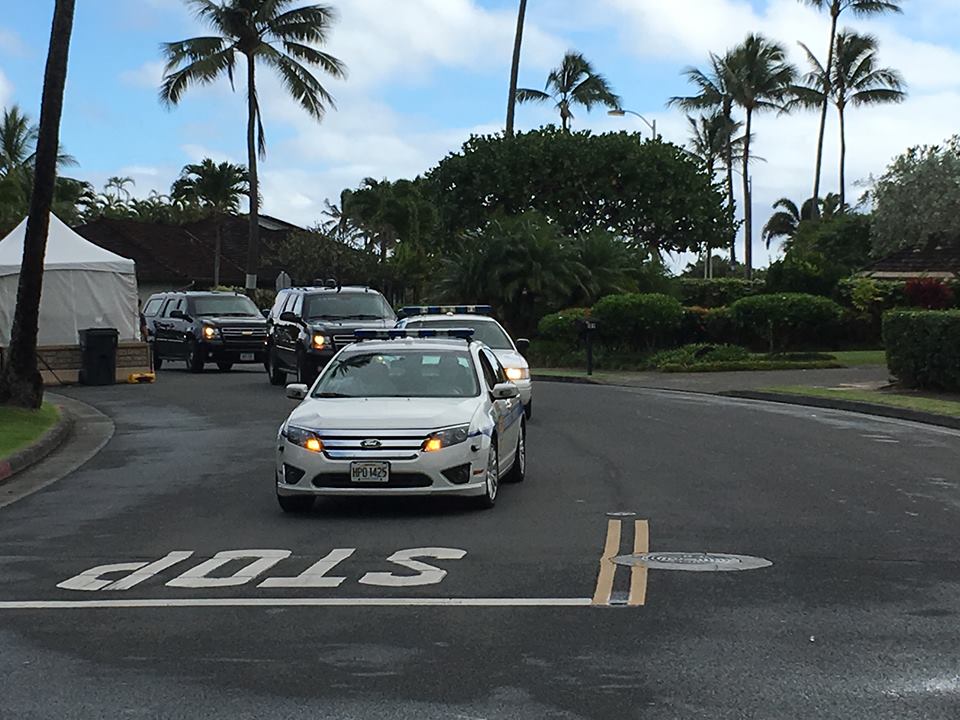 Yet neither President Obama nor First Lady Michelle have stopped to talk with our small, but persistent group about our concerns. With only two days left in his Hawaii holiday before he leaves office in mid-January, we hope he will stop and talk this year, the 9th year he will have seen us.

Our newest sign reflects our desire to have a short face-to-face talk with the President: “Waiting Nine Years to Talk Story.” There are only two days left for the President to stop and hear us-and only twenty days to close Guantanamo, grant clemency to Chelsea Manning and recognize Palestine!!! 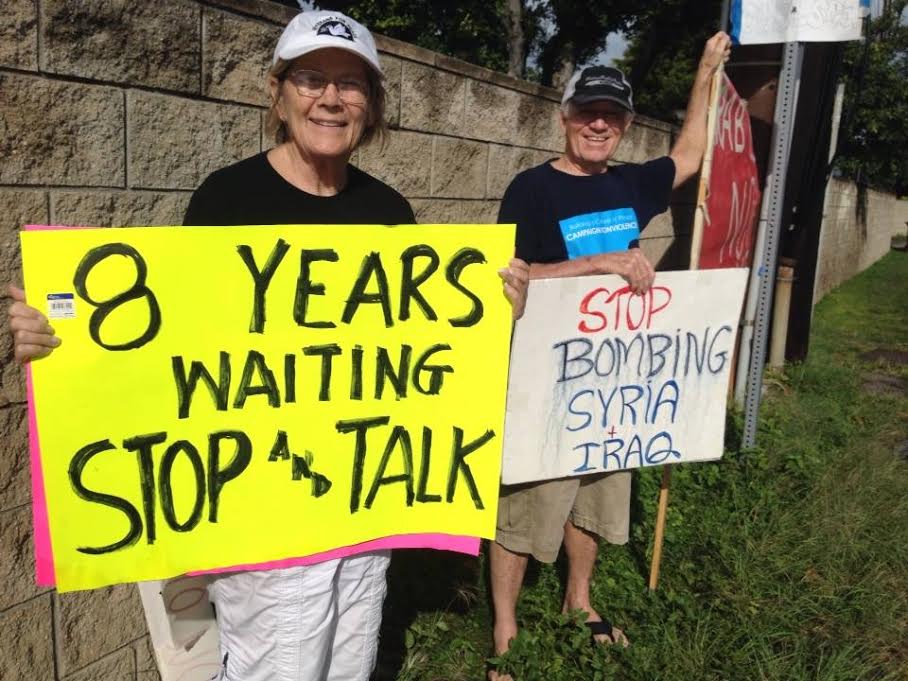 We can always hope he will stop!