NOWAR2022: Resolutely Forward to a Just and Sustainable Peace 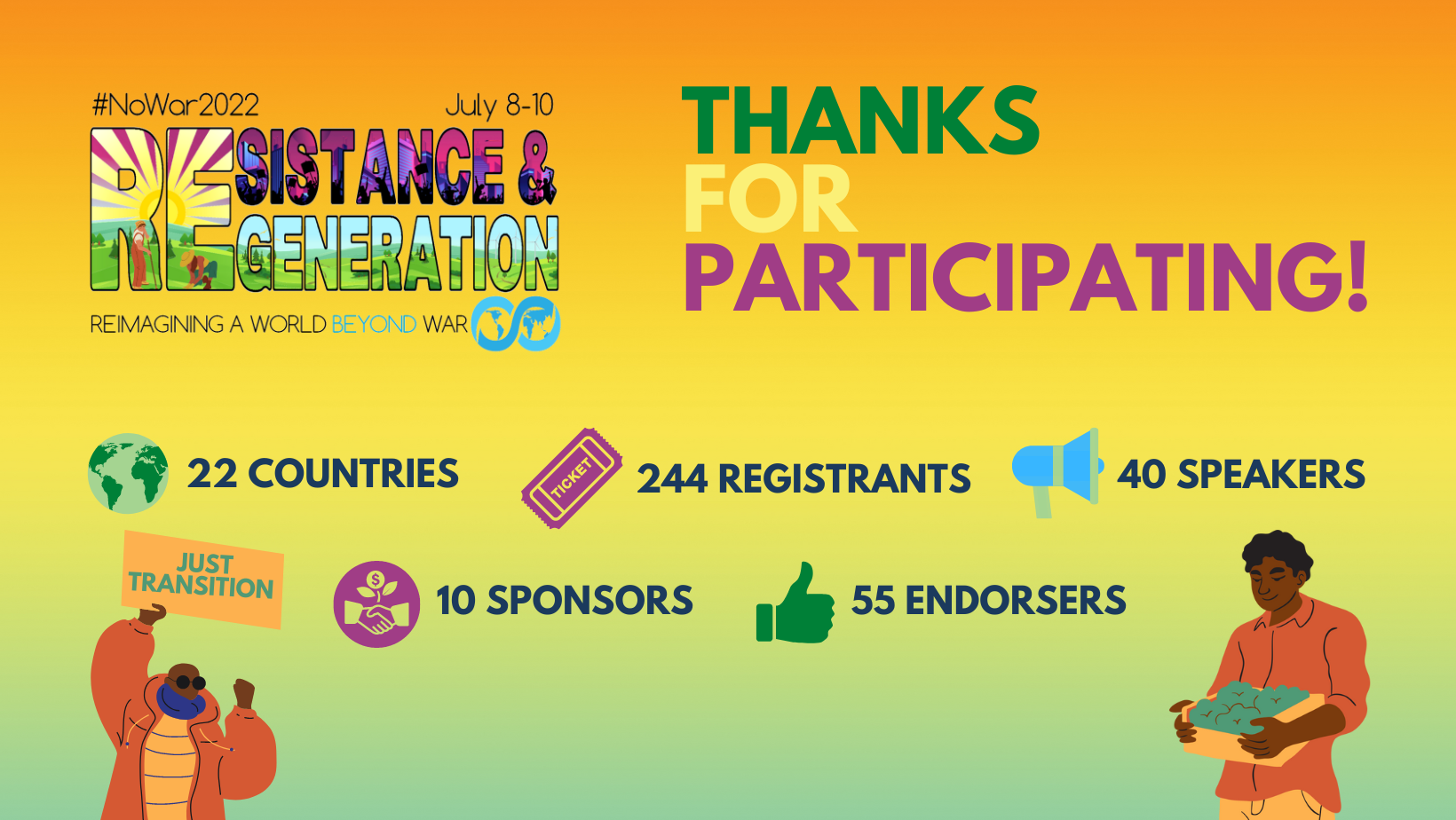 I was blown away by World BEYOND War’s annual online conference! I counted 40 speakers and there were hundreds of international registrants: a truly global coming together of activists in solidarity and hope.

There were many overlapping events and it was impossible to attend them all; the highlights for me were the opening performance and presentations, the session on public banking, and the workshop on media bias and peace journalism, so I will review those events here.

See the full program with lots of useful references here.

Thus crooned modern folk troubadour Samara Jade, strumming her guitar from a residence in Victoria (having been forced to find an alternative spot due to the Rogers internet outage) as sunlight streamed through a window. These lyrics from the Joni Mitchell song Woodstock seemed tailor-made for a group of pacifists embarking on a celebration of peacemaking and hope… a moment of déja vu for this child of the sixties!

This evocative performance was followed by a passionate opening address by Yurii Sheliazhenko, a Ukranian activist and WBW Board member, followed by Pablo Dominguez, Petar Glomazic and Milan Sekulovic of the Save Sinjajevina campaign, 2021 WBW Peacemaker of the Year.

Next, several other WBW chapter coordinators from around the world (Ireland, Germany, US, New Zealand, Canada, Cameroon, Chile…) presented attendees with a snapshot of our activities. Juan Pablo, the Chilean coordinator, reminded us that indigenous voices “contribute wisdom to the dialog”–wisdom that is sorely needed in these times of heightened geopolitical tensions.

As the coordinator of the newest Canadian chapter, I got to present! The video of the opening ceremonies and presentations is here, and a PPT of my chapter’s activities is here.

Marybeth Gardem of Women’s International League for Peace and Freedom (WILPF) and feminist journalist and author Rickey Gard Diamond taught us that our economy is still waged as a war—hence the expression “Making a killing.” Economics are a decidedly masculine invention—women could not have played too great a role in creating the economy, since women were in fact the first property. The current economic system is designed to keep us in debt and move money to the one percent.

The problem is that public money is on a one-way pipeline to privately owned Wall Street banks. For example, Arizona paid $312 million in interest alone to Wall St. in 2014. Also, banks’ biggest profits come from war- making and business, and since our governments are placing our life savings—our pensions—in banks, the public is being forced to support industries that it wants no part of. Public banks would keep public money in communities.

And, you might be surprised to learn, there are already some public banks. For example:

It occurred to me that we Canadian activists could do more to revive public banking, and that the community groups like Leadnow who are working to get RBC (the worst offender) and other banks to divest from fossil fuels, would probably be interested in a campaign on public banking, since this would provide an alternative for consumers who want to take their money away from banks that are killing the climate.

This was the most lively and entertaining of the workshops that I attended. It featured Jeff Cohen of FAIR.org; Steven Youngblood of Center for Global Peace Journalism; and Canadian Dru Oja Jay of The Breach. These speakers advocated for an alternative to mainstream corporate media and biased new reporting. There were so many raised hands at the end: we could have continued this conversation for hours! Alternative media people are passionate idealists and debaters!