Nuclear-capable B-52 bombers join B-2s, B-1Bs on Guam amid tensions with North Korea 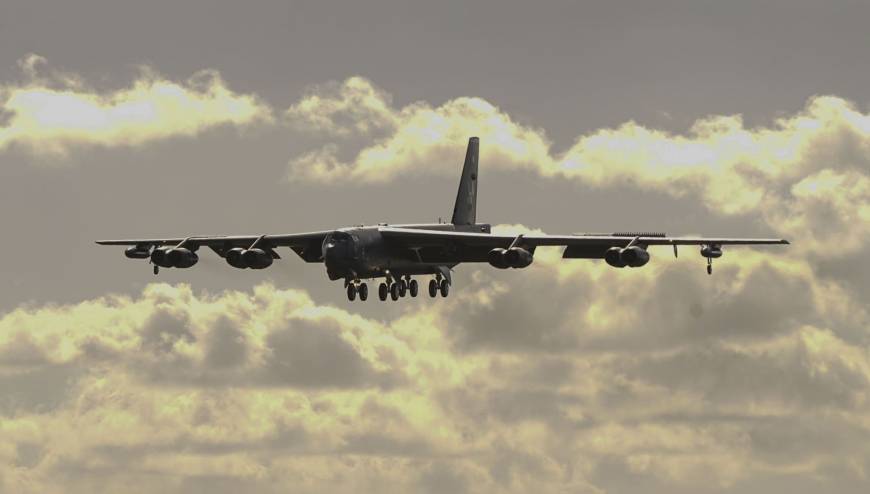 The U.S. Air Force announced Tuesday that it has deployed six of its powerful B-52 strategic bombers to Guam amid tensions with nuclear-armed North Korea.

The six planes, accompanied by 300 airmen, join three of the air force’s B-2 stealth bombers that were also recently dispatched to the U.S. island territory, home to Andersen Air Force Base, a key American outpost in the Pacific.

The base is also currently hosting several B-1B heavy bombers. While both the B-52 and B-2 are capable of carrying nuclear payloads, the B-1B has been modified to carry conventional ordinance only.

The deployment, conducted “in support of U.S. Pacific Command’s (PACOM) Continuous Bomber Presence mission,” according to a U.S. Pacific Air Forces statement, is likely to raise eyebrows in North Korea, which last year threatened to fire missiles near Guam.

The B-52s were last deployed to the region in July 2016, during which they conducted a variety of joint and bilateral training missions with the U.S. Navy, U.S. Marine Corps, Air Self-Defense Force, South Korean Air Force and Royal Australian Air Force.

The move, widely seen as a show of American military muscle, was likely intended to reassure Asian allies nervous amid the North Korean nuclear crisis.

“The B-52Hs return to the Pacific will provide U.S. PACOM and its regional allies and partners with a credible, strategic power projection platform, while bringing years of repeated operational experience,” the U.S. Pacific Air Forces said in its statement.

“This forward deployed presence demonstrates the U.S. continued commitment to allies and partners in the Indo-Pacific region,” it added.

It was unclear how long the base, some 3,400 km from North Korea, would play host to all three bombers.

Overflights of the Korean Peninsula by heavy bombers such as the B-52, B-2 and B-1B have incensed Pyongyang. The North sees the flights by what it calls “the air pirates of Guam” as a rehearsal for striking its leadership and has routinely lambasted them as “nuclear bomb-dropping drills.”

In November, the U.S. Pacific Air Forces confirmed to The Japan Times that it had flown two B-52s for a rare joint mission with the ASDF in the skies near North Korea in August.

The North has ramped up its threats to the U.S. and its allies in recent months in both words and deeds — including with successful tests of what the country claimed was a powerful hydrogen bomb and the separate test of an intercontinental ballistic missile believed capable of striking the American mainland.