On An Alternative Global Security System: A View From the Margins 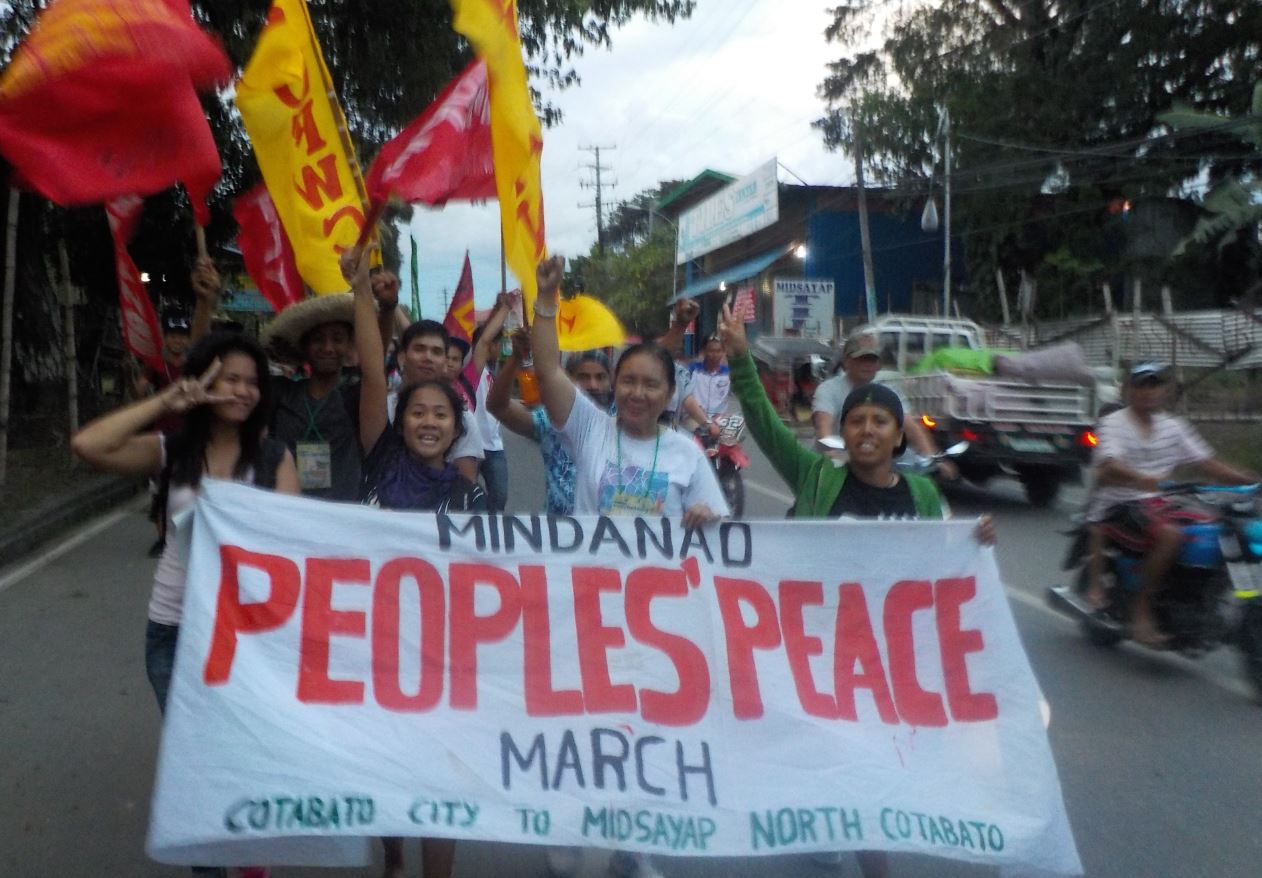 The tasks ahead to build an alternative global security system (AGSS) are a gigantic challenge to all of us who believe that a peaceful world is possible, but there are stories of hope all over the world. We just need to hear them.

Creating and Sustaining a Culture of Peace

I want to share a story of a former rebel who became a peacebuilder and teacher in Mindanao, Philippines. As a young boy in the 70s, Habbas Camendan narrowly escaped being killed in a massacre by Marcos government troops of evacuees in their village in Cotabato, where 100 Moros (Filipino Muslims) died.  “I was able to escape, but I was traumatized. I felt that I had no choice: lumaban o mapatay –fight or get killed.  The Moro peoples felt helpless without our own army to defend us. I joined the Moro National Liberation Front and I was a fighter in the Bangsa Moro Army (BMA) for five years.”

After leaving the BMA, Habbas became friends with Christian Church members who invited him to attend seminars on peacebuilding.  He later joined the Mindanao People’s Peace Movement (MPPM), a federation of Muslim and non-Muslim indigenous  as well as Christian organizations working for peace in Mindanao. Now, Habbas is an MPPM Vice-Chairperson. and teaches Human Rights and Environmental Protection and Management from Islamic Perspective in a local College.

Habbas’ experience is the story of countless young people all over the world who are vulnerable to commit violence and to join groups waging war and even terrorist groups. Later in his life, peace education in nonformal education settings would change his views about violence. “I learned that there is a way of fighting where you will not kill and be killed, there is an alternative to war – the use of peaceful and legal means,” Habbas said.

During our Week 5 discussions in World BEYOND War’s War Abolition Course, much was said about the gains of peace education in the school settings. However, we need to recognize that in many countries in the world, children and young people drop out of school due to poverty. Like Habbas, these children and young people may see no option but to take up arms to change the system and improve their lives.

How can we create a culture of peace in the world if we will not be able to teach our children and young people about peace?

Lerry Hiterosa is now a model youth leader in his urban poor community in Navotas, Philippines. He developed his capacities through seminars on Leadership, Communication and Conflict Resolution Skills. In 2019, Lerry became the youngest peace marcher in the Japan National Peace March for the Abolition of Nuclear Weapons. He brought the voice of the Filipino poor to Japan and came back home with a commitment to work for a world without nuclear weapons. Lerry just graduated  from his course in Education and plans to continue teaching about peace and the abolition of nuclear weapons in his community and school.

The key message that I want to say here is that building a culture of peace needs to begin at the village level – whether in the rural or urban areas. I fully support the Peace Education of WBW, with a call that the youth who are not in school should be given attention.

Throughout the War Abolition 201 course, the proliferation of US bases – around 800 outside the US, and more than 800 bases inside the country where trillions of dollars of the American people’s money are spent, has been identified as a harbinger of war and conflict all over the world.

The Filipinos have a proud moment in our history when our Philippine Senate decided not to renew the Philippines-US Military Bases Agreement and to close the US bases in the country in September 16, 1991. The Senate was guided by the provisions of the 1987 Constitution (crafted after the EDSA People Power Uprising) that mandated “an independent foreign policy” and “freedom from nuclear weapons in its territory.” The Philippine Senate would not have made this stand without the continuous campaigns and actions of the Filipino people. At the time of the debates about whether to close the bases, there was a strong lobby from pro-US bases groups which threatened gloom and doom if the US bases would be closed, saying that the economy of the areas occupied by the bases would collapse. This has been proven wrong with the conversion of former bases to industrial zones, such as the Subic Bay Freeport Zone which used to be the Subic US Base.

This shows that countries hosting US bases or other foreign military bases can boot out them out and use their lands and waters for domestic benefit. However, this would require political will on the part of the host country’s government. A government’s elected officials need to listen to their voters so a big number of citizens lobbying for foreign bases ejection cannot be ignored. Lobby groups of American anti-bases activists also contributed to the pressure on the Philippine Senate and in the US for the withdrawal of bases from our country.

What does a Peace Economy of the World Mean ?

The Oxfam 2017 report on global inequality cited that 42 individuals held as much wealth as the 3.7 billion poorest people on the planet.  82 % of all wealth created went to the top 1 percent of the world’s richest while zero % nothing—went to the poorest half of the global population.

Global security cannot be built where such unjust inequality exists.  The “globalization of poverty” in the post-colonial era is the direct result of the imposition of the neoliberal agenda.

“Policy conditionalities” directed by the International  Financial Institutions – World Bank (WB) and International Monetary Fund (IMF) against indebted Third World, consist of a set menu of deadly economic policy reforms including austerity, privatization, the phasing out of social programs, trade reforms, compression of real wages, and other impositions that suck out the blood of workers and the natural resources of an indebted country.

Poverty in the Philippines is rooted in the neoliberal policies enforced by Philippine Government officials who have followed structural adjustment policies dictated by the World Bank and International Monetary Fund. In 1972-1986, under the Marcos dictatorship, the Philippines became a guinea pig for the World Bank’s new structural adjustment programs bringing down tariffs, deregulating the economy, and privatizing government enterprises. (Lichauco, pp. 10-15) The presidents that followed, from Ramos, Aquino and currently President Duterte have continued these neoliberal policies.

In the rich countries like the US and Japan, the poor populations are increasing because their governments are also following the impositions of the IMF and the World Bank. Austerity measures imposed on health, education, public infrastructure, etc. are intended to facilitate the financing of the war economy -including the military industrial complex, the regional command structure of US military facilities worldwide and development of nuclear weapons.

Military intervention and regime change initiatives including CIA sponsored military coups and “color revolutions” are broadly supportive of the neoliberal policy agenda which has been imposed on indebted developing countries worldwide.

The neoliberal policy agenda that forces poverty on peoples of the world, and the wars are two faces of the same coin of violence against us.

Therefore, in an AGSS, institutions like the World Bank and the IMF shall not exist. While trading among all nations will inevitably exist, the unfair trade relations should be abolished.  Fair wages should be granted to all workers in every part of the world.

Yet the individuals of every country can make a stand for peace. What if the American taxpayer refused to pay taxes knowing that his/her money will be used to fund wars ?  What if they called for a war and no soldiers enlisted?

What if the people of my country the Philippines went out to the streets in millions and called for Duterte to step down now?  What if the people of every nation chose to elect a president or prime minister and officials who would write a Peace Constitution and follow it?  What if half of all positions in the governments and bodies at local, national and international level were women?

The history of our world shows that all great inventions and accomplishments were made by women and men who dared to dream.

For now I end this essay with this song of hope from John Denver:

Merci Llarinas-Angeles is Management Consultant and Convener for Peace Women Partners in Quezon City, Philippines. She wrote this essay as a participant in World BEYOND War’s online course.