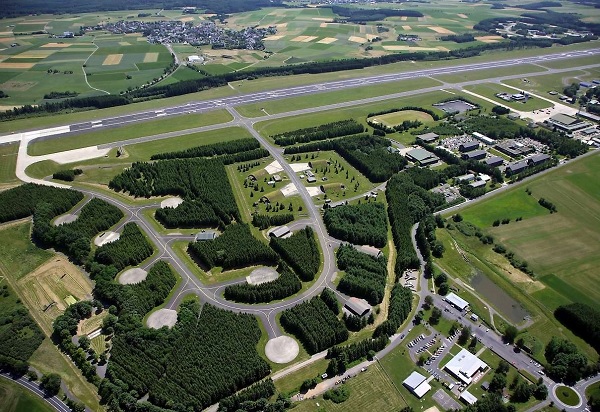 On Sunday, July 15th 2018, eighteen people from four different countries cut through fences to reclaim German Air Force Base Büchel, which hosts about 20 U.S. nuclear bombs. The activists are from the USA (7), Germany (6), The Netherlands (4) and England (1).

The peace activists cut through razor wire and some other fences and several made it to the runway; three activists walked to a nuclear weapons bunker, and climbed up to the top where they were undetected for an hour. All 18 were eventually found by soldiers, handed over to the civil police, ID checked, and released from the base after 4-½ hours.

This action was part of the international week during the 20 weeks of protests by the German campaign ‘Buechel is everywhere! Nuclear weapons-free now!’. The campaign demands the withdrawal of nuclear weapons from Germany, the cancellation of the upcoming nuclear modernization and compliance with international treaties.

On this air force base, German pilots stand ready to fly Tornado fighter jets with U.S.  B-61 nuclear bombs and could even drop them, on orders from U.S. President Donald Trump on targets in or near Europe.

This “nuclear sharing” within NATO is in violation of the Non-Proliferation Treaty, which does not allow Germany to take nuclear weapons from other countries and forbids the U.S. from sharing its nuclear weapons with non-nuclear weapons states. The activists demand of their governments that they sign the new UN Treaty on the Prohibition of Nuclear Weapons, of July 7th 2017, which was supported by 122 UN members.

“Civil disobedience is often necessary to make important changes possible, like the abolition of slavery, the women’s rights to vote, and the civil rights movement,” said John LaForge, co-director of Nukewatch, the Luck, Wisconsin peace group, which helped organize a 9-person US delegation to the protest. The nonviolent campaign is part of the ICAN network, which received the Nobel Peace Prize in 2017, and recently called for nonviolent direct actions on nuclear bases to urge more countries to sign the treaty ban. The Dutch activist Frits ter Kuile said: “My motivation is the commandment to love one’s “enemies”, and the Nuremberg principles stating that everyone is responsible for the crimes their government commits. We have the duty to take down the fences that protect nuclear mass destruction, and reclaim the land for the people and their real needs”.