Candidates for public office in 2018 are making this commitment to the cause of peace. 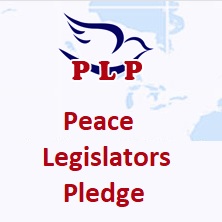 Our aim is to advance the cause of peace in the primary and general elections of 2018. In a world ravaged by military conflict and fraught with the threat of catastrophic war using weapons of mass destruction, peace is everyone’s responsibility. Every citizen — certainly every political official, whether elected or appointed — is in a position to advocate for peace as a condition that enables human beings to go on living at all.

We are asking all political candidates and current officeholders — whether elected or appointed — to advocate for peace through non-violent resolution of international conflict, conversion from a military and fossil-fuel based economy to a sustainable economy that meets civilian needs, and international economic, educational, and cultural exchange programs.

In a world ravaged by military conflict and fraught with the threat of catastrophic war using weapons of mass destruction, peace is everyone’s responsibility — certainly the responsibility of every political official, whether elected or appointed. We are asking that candidates for political office and current office holders make the following commitment:

In keeping with the above aims, I will not knowingly accept any campaign donations from military contractors or fossil fuel corporations.

Join us in asking candidates and public office holders at every level of service — community, county, state, and national — to sign this peace pledge. Discuss with them how they can advocate and act on behalf of the cause of peace. And educate your own community about war-and-peace issues. Contact us and we will work with you to make your peace activism most effective.