Peaceworkers Unite for a World BEYOND War 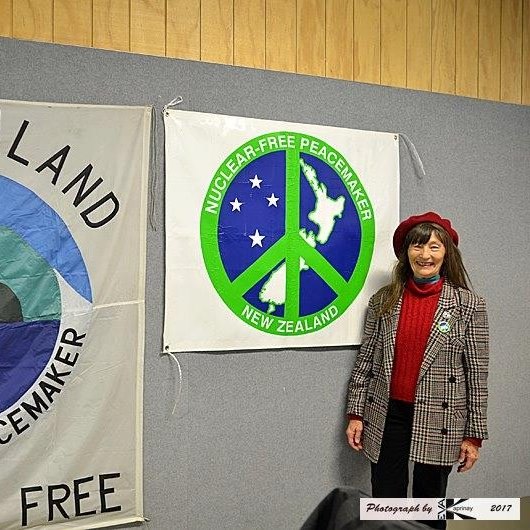 ‘The major threat facing humanity in the 21st century is the proliferation of violence, weapons and warfare,‘ says Laurie Ross, a veteran NZ Nuclear Free Peacemaker of Auckland. She has just returned from the World BEYOND War conference in Toronto, Canada which brought together American and Canadian Peace groups to address ‘Global Security: Alternatives to War.’

The underlying problem is that governments maintain institutionalized warfare with billions of dollars of military equipment. They justify it by political defense ideologies and global entertainment which presents crime, violence and war as the norm. The military warfare culture depends on mass production of armaments plus public consent.

‘It is vital for people to realize that taxpayers are funding weapon corporations who profit from warfare. Production and use of war weapons depletes precious resources, pollutes the land, air and waterways. It also trains and employs men and women for violence and warmaking rather than peacework.’

Future predictions are for high tech cyberwar, Artificial Intelligence or nuclear war to destroy humanity. Yet there is little effort by governments to change this barbaric behavior of humans. It is no wonder that suicide is the main cause of death among U.S. military who struggle with PTSD and the insanity of war.

However, Laurie is still hopeful that New Zealand can resist the pressure to maintain warfare and militarism. She states:

‘We need to work on Peacemaking Alliances with the people of the U.S., Australia and Canada, to unite our efforts, both at civil society and government levels. We should focus on delivering humanitarian aid, providing UN Peacekeeping and Peacebuilding services to wartorn countries or those sufferng environmental disaster. NZ should devote more effort into helping liberate humanity from the shackles of the warfare mindset. This involves government investment in Peace education. It also requires redirection of military spending for meeting social and environmental needs both in NZ and overseas.’

It is possible for all children of the world to have adequate food, clean water, health care, sanitation, housing and education. It is possible to clean up the rivers and sea, replant the trees and stop climate devastation. But only if the people convince governments to redirect military spending to achieve the UN Sustainable Development Goals. Disarmament and stopping warfare is vital for our survival. This is the message of UN Secretary General Antonio Guterres in ‘Securing Our Common Future: An Agenda for Disarmament,’ an 80 page document that provides the international community of nation states with the mandate for collective action.

Laurie works on behalf of the United Nations Association NZ and the Peace Foundation NZ/Aotearoa, which supported her attendance at the World BEYOND War conference 20-23rd September and at the ‘UN General Assembly High Level Plenary on Total Elimination of Nuclear Weapons’ at the UN in New York 26th Sept. She was with Alyn Ware (UNA NZ and Peace Foundation International Disarmament Rep.) and Liz Remmerswaal (NZ Coordinator World BEYOND War), who is coordinating Peaceful Protest at the NZ Defense Industry Conference in Palmerston North 31st October where the major weapon corporations are gathering to sell war weapons.

World BEYOND War is the cutting edge of international civil society opposing warfare, the weapons industry and the underlying warfare doctrines and belief systems. See www.worldbeyondwar.org led by David Swanson, who dedicates his life to serving humanity through prolific writing, organizing events, media and public speaking. He presents the case for ending the dominance of warfare that plagues the planet.