The Pentagon and CIA Are the Cause of the Korean Crisis

By Jacob Hornberger, Media with Conscience. 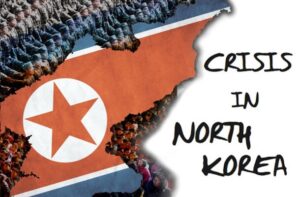 Given that we all have been born and raised under the type of governmental structure known as a “national security state,” naturally many Americans are unable to imagine life under a different structure, such as a limited-government republic.

Moreover, they are convinced that a vast, powerful, and permanent military establishment, the CIA, and the NSA are absolutely essential to keep them safe from enemies who, they have been led to believe, are hell-bent on taking over the United States.

Frightened, Americans end up supporting an expansion of the military establishment, the CIA, and the NSA, eagerly giving them ever more powers and tax monies that, over time, end up destroying the freedom, privacy, and economic well-being of the American people.

While most everyone thought that the Cold War ended in 1989, they were wrong. For those in the Pentagon and the CIA, it never ended, at least insofar as North Korea was concerned. U.S. troops continue to be stationed in South Korea more than half-a-century after the Korean War was suspended.

The reason the Pentagon keeps them stationed there is so that if the civil war between North Korea and South Korea were ever to resume, the United States would automatically be drawn into the conflict since American soldiers would quickly be killed in the initial days of hostilities. The U.S. troops in Korea serve as the Pentagon’s and CIA’s cleverly devised tripwire that would enable these two agencies to avoid any debates on whether the United States should intervene again in the conflict and to circumvent any discussions regarding the necessity of a congressional declaration of war under the Constitution.

The Pentagon tells us that the problem lies with the North Korean regime. Harkening back to the original Cold War justification for converting the federal government into a national-security state after World War II, the Pentagon says that North Korea is a communist regime, one that is highly irrational, even crazy, and hell-bent on attacking the United States with long-range nuclear missiles.

In actuality, however, it is the Pentagon itself, along with its cohort agency, the CIA, which are at the root of the ongoing, never-ending crisis in Korea.

Let’s ask ourselves an important question: Why is North Korea so insistent on acquiring nuclear weapons? Taking a page out of their old Cold War handbook, the Pentagon and the CIA, along with their assets in the mainstream press, claim that this shows that the North Koreans intend to attack South Korea, and then Japan, and the rest of Asia, and then — well, the idea is that the dominoes will begin falling until they finally reach the United States, which will then succumb to the communists. Just like Americans were told would happen during the Cold War and the hot war in Vietnam in which the national-security establishment embroiled America.

What’s the real reason that North Korea wants nuclear bombs and nuclear missiles that can hit the United States?

Deterrence. They want to deter the United States from attacking their country, ousting their regime from power, and uniting Korea under a pro-U.S. regime.

Or failing to deter, they want to be able to cause as much damage to others, including Americans, should the U.S. government succeed in bringing about a resumption of war in Korea. Nuclear bombs would do that.

Ever since the advent of the national-security state after World War II, the Pentagon and the CIA have had one primary mission: to protect “national security.” I put the term in quotation marks because no one really knows what it means. From the very beginning, the Pentagon and the CIA were given the authority to determine the meaning of the term, to determine what constitutes a “threat” to national security, and to do whatever is necessary to remove it.

The Pentagon and the CIA acquired two important means to achieve its mission of protecting national security: regime change and assassination, which are obviously related since oftentimes assassination is the way regime change is accomplished.

Practically from the beginning, the Pentagon and the CIA embarked a course of action designed to oust regimes around the world that were not “friendly” to the United States, or were too “friendly” toward the Soviet Union, or were headed by communists, or were just too independent of U.S. control.

The regime changes come about through bribery, kidnapping, coups, invasions, or assassinations.

Everyone around the world knows this. And they also know the history, mission, and methods of the U.S. national-security state. They know about Iran, Iraq, Guatemala, Chile, Brazil, Congo, Indonesia, Nicaragua, Cuba, Grenada, Panama, Venezuela, Afghanistan, and all the other countries in which the U.S. national-security state has brought about or tried to bring about regime change.

The North Koreans are not stupid. They know that there are few things that the Pentagon and the CIA would love more than regime change in North Korea. North Korea is one of the parts of the Cold War that the U.S. national-security establishment never let go of. They still are committed to regime change in Korea. They even say so.

Rulers, including communist ones, don’t like giving up power. They will fight tooth and nail to retain power.

Thus, the question naturally arises: How can North Korea deter the U.S. national-security state from initiating a regime-change operation against North Korea?

The answer is obvious: Nuclear weapons. If North Korea can convince the United States that a regime-change operation on North Korea will result in massive death and destruction from just a few nuclear bombs that might well deter U.S. officials from starting a war or provoking a war with North Korea with the aim of achieving regime change there.

What’s irrational, crazy, or stupid about that?

Recall Iraq. U.S. officials called Saddam Hussein’s regime part of an “axis of evil,” along with Iran and North Korea. So, U.S. officials simply invaded Iraq and effected regime change there. The outcome was never in doubt. Iraq was a third-world country with a third-rate military.

Does anyone think that North Korea wasn’t paying attention?

Now, move to Cuba. Americans have long been taught that the Cuban Missile Crisis in 1962 was caused by the Soviet Union’s installation of offensive nuclear weapons in Cuba. It’s a claim that is repeated by most every mainstream journalist who writes about this episode in U.S. history.

Nothing could be further from the truth. The crisis was caused by the Pentagon and the CIA because both of them were striving for another regime-change operation in Cuba. The Soviets put those nuclear weapons in Cuba strictly for defensive purposes. The purpose was the deter another U.S. attack and invasion or, failing that, enable the Cuban military to have a reasonable chance at successfully defending against a U.S. invasion of the island, which the Pentagon and the CIA were recommending to President Kennedy.

How do we know the Soviet missiles were installed in Cuba strictly for defensive purposes? Because if the Soviets had put those weapons there to start a war with the United States, they would have fired the missiles! They didn’t. More important, when the Kennedy administration promised that the United States would no longer attack or invade Cuba, the Soviets agreed to withdrew the missiles.

Now consider North Korea, whose officials see the long-term U.S. obsession with regime change in places like Cuba and Iraq. They see the U.S. national security state engaged in kidnappings, coups, assassinations, invasions, bribery, to secure regime change around the world. And they see that the only chance they have to avoid this fate is the acquisition of nuclear weapons.

The solution to the ongoing, never-ending crisis in Korea? Isn’t it obvious? Leave Korea to the Koreans, bring the Pentagon and the CIA home, restore a constitutional republic to our land, and dismantle the entire Cold War dinosaur governmental structure known as the national-security state before it does any more damage to America and the world.

Jacob G. Hornberger is founder and president of The Future of Freedom Foundation.