Petition asks Charlottesville to keep weapons out of rallies

NBC29 WVIR Charlottesville, VA News, Sports and Weather
A new petition, signed by over 8,000 people and just sent to Charlottesville’s City Council, asks Charlottesville to keep weapons out of rallies. The petition, found at https://diy.rootsaction.org/p/cville , reads:

“Make clear that in permits for any rallies in public spaces in Charlottesville, guns, knives, and sticks shall not be allowed.”

Activists, including nonviolent peace activists, are often forbidden to carry posters on sticks, having to use hollow carboard tubes, at events around the United States. Yet in Charlottesville, Va., in August 2017 a group threatening violence and having engaged in it the night before was allowed to assemble in a public space with guns, sticks, and other weaponry. The results were brutal.

There is no reason that Charlottesville cannot, under existing laws, do what many other localities do and set the terms of public rallies to forbid the possession of weapons. Here’s an expert legal opinion that forbidding weapons is legal.

Here is a report on Richmond, Virginia, forbidding weapons at a rally.

There is nothing to be gained by trying to ban rallies of particular political viewpoints, or by trying to ban all public rallies. Either would be in stark violation of the First Amendment of the U.S. Constitution.

There is no need for new laws.

Charlottesville can and must commit to forbidding weapons from rallies.

In addition, over 10,000 people have now signed a second petition in favor of creating a peace memorial in Charlottesville. 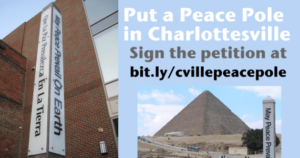 This petition, found at http://bit.ly/cvillepeacepole , reads:

“Set aside 1 square foot of space in a prominent public place, on the Downtown Mall or in a park, where a peace pole can be erected.”

A peace pole is a popular means of expressing a desire for peace around the world, including in the United States, where peace poles are found in public plazas and parks in many locations.

A peace pole can be purchased for $200 with “May Peace Prevail on Earth” written on four sides in four chosen languages.

One idea would be to have 6 sides including English, Spanish, and the languages of Cville Sister Cities: Italian, French, Bulgarian, and one of the many languages from Ghana. Or 8 sides with some left blank to be filled in later.

Charlottesville’s monuments to wars, including World War I, the Native American genocide, the defense of slavery, and the slaughter of 3.8 million Vietnamese, dominate public space. Removing them would be ideal.

An easier method of quickly displaying our city’s support for peace would be to create a peace pole. Charlottesville’s city council has spoken up repeatedly over the years for peace, for reduced military spending, for transition to peaceful industries, and for a halt to particular wars. But a visitor to Charlottesville cannot observe any of that anywhere on the landscape.

Charlottesville has four sister cities, and signs indicating them are visible in Charlottesville. But the motto of Sister Cities International, “Peace Through People,” is nowhere to be found. There is no location set aside to celebrate these relationships, as there could be in combination with a peace pole.

There are peace poles in Warrenton, Va., and at the Pentagon (which is of course a travesty that injures the whole project). There is a peace pole at a church in Charlottesville and a small pole reading “Peace” at an elementary school. What we’re proposing is a public peace pole or some other public monument to peace.