Phase Out Weapons Of Mass Destruction

(This is section 26 of the World Beyond War white paper A Global Security System: An Alternative to War. Continue to preceding | following section.)

Weapons of mass destruction are a powerful positive feedback to the War System, strengthening its spread and ensuring that wars that do occur have the potential for planet-altering destruction. Nuclear, chemical and biological weapons are characterized by their ability to kill and maim enormous numbers of people, wiping out whole cities and even whole regions with indescribable destruction.

At present there are treaties banning biological and chemical weapons but there is no treaty banning nuclear weapons. The 1970 Non-Proliferation Treaty (NPT) provides that five recognized nuclear weapons states– the US, Russia, UK, France and China– should make good faith efforts for the elimination of nuclear weapons, while all other NPT signatories pledge not to acquire nuclear weapons. Only three countries refused to join the NPT— India, Pakistan, and Israel—and they acquired nuclear arsenals. North Korea, relying on the NPT bargain for “peaceful” nuclear technology, walked out of the treaty using its “peaceful” technology to develop fissile materials for nuclear power to manufacture nuclear bombs.note9 Indeed, every nuclear power plant is a potential bomb factory. 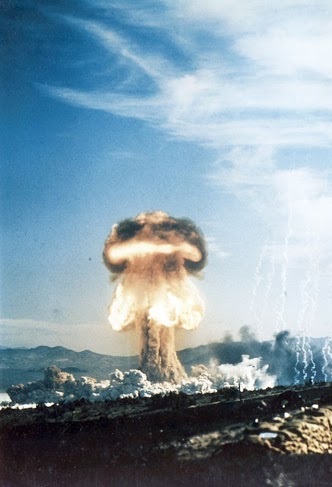 A war fought with even a so-called “limited” number of nuclear weapons would kill millions, induce nuclear winter and result in worldwide food shortages that would result in the starvation of millions. The whole nuclear strategy system rests upon a false foundation, because computer models suggest that only a very small percentage of warheads detonated could cause the worldwide shutdown of agriculture for up to a decade—in effect, a death sentence for the human species. And the trend at present is toward a greater and greater likelihood of some systemic failure of equipment or communication that would lead to nuclear weapons being used.

A larger release could extinguish all life on the planet. These weapons threaten the security of everyone everywhere.note10 While various nuclear arms control treaties between the U.S. and the former Soviet Union did reduce the insane number of nuclear weapons (56,000 at one point), there are still 16,300 in the world, only 1000 of which are not in the U.S. or Russia.note11 What is worse, the treaties allowed for “modernization,” a euphemism for creating a new generation of weapons and delivery systems, which all of the nuclear states are doing. The nuclear monster has not gone away; it is not even lurking in the back of the cave—it’s out in the open and costing billions of dollars that could be far better used elsewhere. Since the not so Comprehensive Test Ban Treaty was signed in 1998, the US has ramped up its high-tech laboratory tests of nuclear weapons, coupled with sub-critical tests, 1,000 feet below the desert floor at the Nevada test site on Western Shoshone land. The US has performed 28 such tests to date, blowing up plutonium with chemicals, without causing a chain-reaction, hence “sub-critical”.note12 Indeed, the Obama administration is currently projecting expenditures of one trillion dollars over the next thirty years for new bomb factories and delivery systems—missiles, airplanes submarines—as well as new nuclear weapons.note113

Conventional War System thinking argues that nuclear weapons deter war–the so-called doctrine of “Mutual Assured Destruction” (“MAD”). While it is true that they have not been used since 1945, it is not logical to conclude that MAD has been the reason. As Daniel Ellsberg has pointed out, every US president since Truman has used nuclear weapons as a threat to other nations to get them to allow the US to get its way. Furthermore, such a doctrine rests on a wobbly faith in the rationality of political leaders in a crisis situation, for all time to come. MAD does not ensure security against either accidental release of these monstrous weapons or a strike by a nation that mistakenly thought it was under attack or a pre-emptive first strike. In fact, certain kinds of nuclear warhead delivery systems have been designed and built for the latter purpose—the Cruise Missile (which sneaks under radar) and the Pershing Missile, a fast attack, forward-based missile. Serious discussions actually occurred during the Cold War about the desirability of a “Grand, Decapitating First Strike” in which the U.S. would initiate a nuclear attack on the Soviet Union in order to disable its ability to launch nuclear weapons by obliterating command and control, beginning with the Kremlin. Some analysts wrote about “winning” a nuclear war in which only a few tens of millions would be killed, nearly all civilians.note14 Nuclear weapons are patently immoral and insane.

Even if they are not used deliberately, there have been numerous incidents where nuclear weapons carried in airplanes have crashed to the ground, fortunately only spewing some plutonium on the ground, but not going off.note15 In 2007, six US missiles carrying nuclear warheads were mistakenly flown from North Dakota to Louisiana and the missing nuclear bombs were not discovered for 36 hours.note16 There have been reports of drunkenness and poor performance by servicemen posted in underground silos responsible for launching US nuclear missiles poised on hair-trigger alert and pointed at Russian cities.note17 The US and Russia each have thousands of nuclear missiles primed and ready to be fired at each other. A Norwegian weather satellite went off-course over Russia and was almost taken for an incoming attack until the last minute when utter chaos was averted.note18note19

History does not make us, we make it—or end it.

The 1970 NPT was due to expire in 1995, and it was extended indefinitely at that time, with a provision for five year review conferences and preparatory meetings in between. To gain consensus for the NPT extension, the governments promised to hold a conference to negotiate a Weapons of Mass Destruction Free Zone in the Middle East. At each of the five year review conferences, new promises were given, such as for an unequivocal commitment to the total elimination of nuclear weapons, and for various “steps” that need to be taken for a nuclear free world, none of which have been honored.note20 A Model Nuclear Weapons Convention, drafted by civil society with scientists, lawyers, and other experts was adopted by the UNnote21 which provided, “all States would be prohibited from pursuing or participating in the ‘development, testing, production, stockpiling, transfer, use and threat of use of nuclear weapons.’” It provided for all the steps that would be needed to destroy arsenals and guard materials under verified international control.note22

To the dismay of Civil Society and many non-nuclear weapons states, none of the proposed steps at the many NPT review conferences have been adopted. Following an important initiative by the International Red Cross to make known the catastrophic humanitarian consequences of nuclear weapons, a new campaign to negotiate a simple ban treaty without the participation of the nuclear weapons states was launched in Oslo in 2013, with follow up conferences in Nayarit, Mexico and Vienna in 2014.note23 There is momentum to open these negotiations after the 2015 NPT Review conference, on the 70th Anniversary of the terrible destruction of Hiroshima and Nagasaki. At the Vienna meeting, the government of Austria announced a pledge to work for a nuclear weapons ban, described as “taking effective measures to fill the legal gap for the prohibition and elimination of nuclear weapons” and “to cooperate with all stakeholders to achieve this goal.”note24 Additionally, the Vatican spoke out at this conference and for the first time declared that nuclear deterrence is immoral and the weapons should be banned.note25 A ban treaty will put pressure not only on the nuclear weapons states, but on the governments sheltering under the US nuclear umbrella, in NATO countries which rely on nuclear weapons for “deterrence” as well as countries like Australia, Japan and South Korea.note26 Additionally, the US stations about 400 nuclear bombs in NATO states, Belgium, the Netherlands, Italy, Germany and Turkey, who will also be pressured to give up their “nuclear sharing arrangements” and sign the ban treaty.note27

Biological weapons consist of deadly natural toxins such as Ebola, typhus, smallpox, and others that have been altered in the lab to be super virulent so there is no antidote. Their use could start an uncontrolled global epidemic. Therefore it is critical to adhere to existing treaties that already make up part of an Alternative Security System. The Convention on the Prohibition of the Development, Production and Stockpiling of Bacteriological (Biological) and Toxin Weapons and on their Destruction was opened for signature in 1972 and went into force in 1975 under the aegis of the United Nations. It prohibits the 170 signatories from possessing or developing or stockpiling these weapons. However, it lacks a verification mechanism and needs to be strengthened by a rigorous challenge inspection regime (i.e., any State can challenge another which has agreed in advance to an inspection.)