What Police Videos Teach Us About Wars 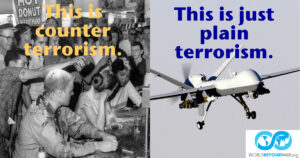 Before people had an easy way to see video footage of police murders, headlines crediting the police with just and noble actions couldn’t be effectively questioned.

We’re still back there in the dark ages when it comes to war murders, but we can overcome the lack of quickly shared videos if we choose to. When the headlines celebrate some sort of “victory” in Mosul or anywhere else, we can point out that the videos of people being blown up in their houses would be truly horrific if we had them. This is not, after all, a point on which there can actually be any question.

The police who murder innocents say they serve a grander purpose of maintaining law and order. Watching the videos of what they do eliminates all possibility of taking that seriously.

The war makers say they serve a grander purpose of . . . well, it depends; sometimes it’s also law and order, other times spreading democracy, other times weapons elimination, other times simply revenge. Imagining the videos we aren’t seeing should help us understand why these justifications do not hold up.

The U.S. has, in recent years, bombed Afghanistan, Pakistan, Iraq, Syria, Libya, Somalia, and Yemen. None of them is safer, less armed, more democratic, more peaceful, more prosperous, or less of a threat to others. Quite the contrary. “Defeating” ISIS by bombing people will fuel more suffering and violence, just as “defeating” the government of Saddam Hussein fueled ISIS.

Picture a woman in Mosul who lacks permission to go outside without a male guardian. Now picture that woman’s roof collapsing on her and her children with a thunderous crash and a cloud of dust. Is she better off? Do those who love her appreciate her “liberation”? Would the video be allowed on U.S. media outlets unless we shared it on social media as many times as we do a police video?

No. Police murder routinely and with immunity. Wars murder extensively, immorally, counterproductively, and illegally with immunity. There can be good policing. But there cannot be good war making. It’s all illegal under the U.N. Charter and the Kellogg-Briand Pact. The war on terrorism has been increasing terrorism for years. The U.S. government itself admits it has no idea who most of the people are that it murders with drones.

“So you’re on the side of the criminals.” “You must love ISIS.” “Putin LOVER!”

I oppose war in the way I oppose dueling or blood feuds, not by supporting one side. I oppose the U.S.-led arming of Western Asia the way I oppose pushing heroin in poor neighborhoods, not by wanting particular people to get it all. I oppose murder by police or soldiers in the way that I oppose capital punishment — that is: not because videos make my social media browsing unpleasant, but because people’s lives are being taken.

It’s time we put an end to war as if we could see it.