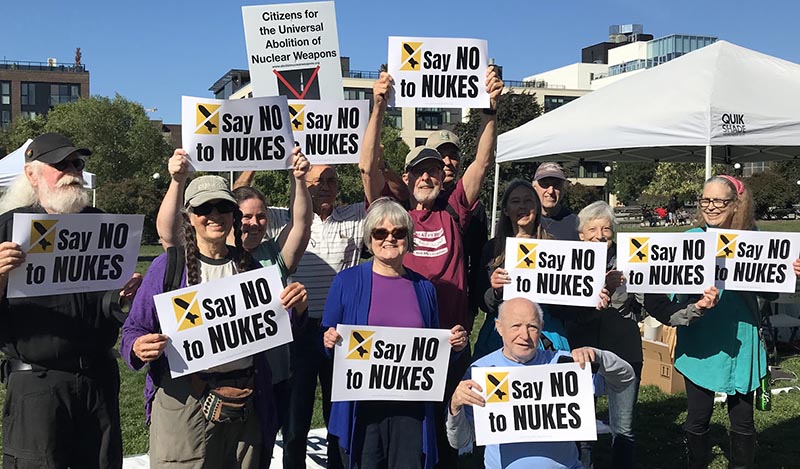 As new polling showed this week that Americans’ fear of nuclear war has steadily grown since Russia invaded Ukraine in February, anti-nuclear campaigners on Friday called on federal lawmakers to take action to mitigate those fears and ensure the U.S. is doing all it can to deescalate tensions with other nuclear powers.

Anti-war groups including Peace Action and RootsAction organized picket lines at the offices of U.S. senators and representatives in more than 40 cities across 20 states, calling on lawmakers to push for a ceasefire in Ukraine, the revival of anti-nuclear treaties the U.S. has exited in recent years, and other legislative actions to prevent nuclear catastrophe.

“Anyone paying attention should be worried about the rising dangers of nuclear war, but what we really need is action,” Norman Solomon, co-founder of RootsAction, told Common Dreams. “Picket lines at so many congressional offices across the country convey that more and more constituents are fed up with the timidity of elected officials, who’ve refused to acknowledge the extent of the current grave dangers of nuclear war, much less speak out and take action to mitigate those dangers.”

Today, there are nearly 50 pickets organized at Congressional and Senate offices across the country to urge elected officials to #DefuseNuclearWar.

Now is the time to act.

The most recent polling released by Reuters/Ipsos on Monday showed that 58% of Americans fear the U.S. is headed toward nuclear war.

The level of fear regarding a nuclear conflict is lower than it was in February and March 2022, shortly after Russian President Vladimir Putin invaded Ukraine. But experts said Friday the polling shows sustained fear about nuclear weapons that has been rare in the United States.

“The level of anxiety is something that I haven’t seen since the Cuban missile crisis,” Peter Kuznick, a history professor and director of the Nuclear Studies Institute at American University, told The Hill. “And that was short-lived. This has gone on for months now.”

Chris Jackson, senior vice president of Ipsos, told The Hill that he didn’t “recall any time in the last 20 years where we’ve seen this sort of level of concern about the potential for nuclear apocalypse.”

Putin threatened the use of nuclear weapons last month, saying the U.S. set “a precedent” for using them when it dropped two atomic bombs on Japan in 1945 and adding that he would use “all available means” to defend Russia.

The New York Times reported this week that “senior American officials say they have seen no evidence that Mr. Putin is moving any of his nuclear assets,” but that they are also “far more concerned than they were at the start of the [Ukraine] conflict about the possibility of Mr. Putin deploying tactical nuclear weapons.”

Campaigners at “Defuse Nuclear War” picket lines on Friday called on members of Congress to allay those concerns by:

“We’re sick of members of Congress acting like spectators instead of initiating measures that the U.S. government could take to reduce the terribly real risks of global annihilation,” Solomon told Common Dreams. “The absurdly muted response from members of Congress is intolerable—and it’s time to publicly hold their feet to fire.”

The power held by President Joe Biden, Putin, and the leaders of the world’s other seven nuclear powers is “unacceptable,” wrote Kevin Martin, president of Peace Action, in a column on Thursday.

“However,” he added, “the current crisis brings with it the opportunity to re-engage on nuclear disarmament issues at the grassroots level in order to show our government it needs to get serious about reducing, not exacerbating, the nuclear threat.”

In addition to Friday’s pickets, campaigners are organizing a Day of Action on Sunday, with supporters holding demonstrations, handing out fliers, and prominently displaying banners calling for a deescalation of the nuclear threat.