What Would We Do Without Police, Prisons, Surveillance, Borders, Wars, Nukes, and Capitalism? Watch and See! 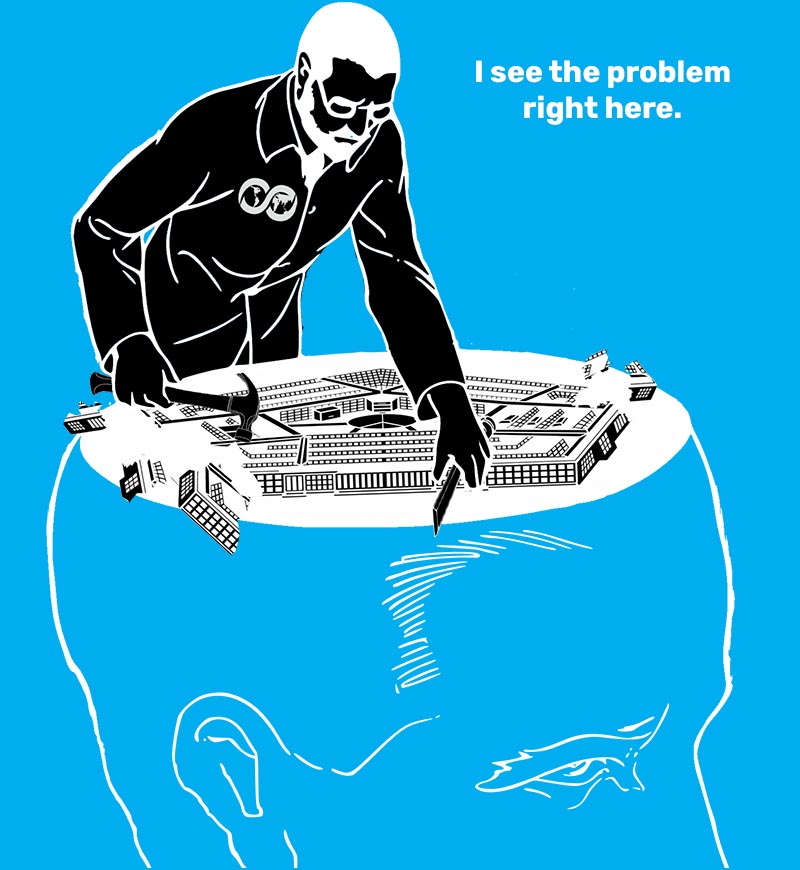 What would we do in a world lacking police, prisons, surveillance, borders, wars, nuclear weapons, and capitalism? Well, we might survive. We might sustain life on this little blue dot a little longer. That — in contrast to the status quo — ought to be sufficient. We might, in addition, do a lot more than sustain life. We might transform the lives of billions of people including each person reading these words. We might have lives with less fear and worry, more joy and accomplishment, more control and cooperation.

But, of course, the question I began with might be asked in the sense of “Wouldn’t the criminals get us, and the forces of law and order be imperiled, and evildoers take away our freedoms, and sloth and laziness deprive us of updated phone models every few months?”

I recommend, as a way to begin answering that concern, reading a new book by Ray Acheson called Abolishing State Violence: A World Beyond Bombs, Borders, and Cages.

This tremendous resource surveys the seven different candidates for abolition in my opening question. In each of seven chapters, Acheson looks into the origins and history of each institution, the problems with it, the faulty beliefs that support it, the harm it does, the harm it does to particular groups of people, what to do about, and how it overlaps and interacts with the other six practices whose time has come and really needs to go.

As this book is of a reasonable length, there’s only so much on what to do about each institution, how to get rid of it, what to replace it with. And there’s very little in the way of explicit responses to typical counter-arguments from the unconvinced. But the real strength of this book is the richness of the investigation into how the seven systems interact with each other. This strengthens each case in a rare manner — principally because most authors of books about domestic reforms try to pretend that wars and militarism and weapons and their funding do not exist. Here we get a thorough case for abolition radically and surprisingly improved by dropping that pretense. The cumulative impact of the several arguments may also strengthen the power of each one to persuade — provided that the unpersuaded reader keeps reading.

In part, this is a book about the militarization of police, the militarization of incarceration, etc., but also about the capitalization of war, the warification of borders, the surveillancification of capitalism, and so on. From the failures of police reforms to the incompatibility of predatory capitalism with terrestrial ecosystems, the case for ending, not mending, rotten structures and ways of thinking piles up.

I’d like to have seen a bit more on what works to reduce crime, and on acts like murder that, unless they are eliminated, really can’t be redefined into something non-concerning. I think Acheson makes an important point in stressing that a transformation will involve experimentation and failures along the way. This is even more the case when we consider that an abolition campaign will be resisted and sabotaged at every step. Still, the chapter on police could have used a bit more on how to handle inevitable emergencies, most of which it’s pretty easy, I think, to show people are better handled without police. But there is a great deal here on what to do, including on the demilitarization of police, which many of us are working on.

The surveillance chapter includes a wonderful survey of the problem, though less on what to do about it or what to do instead of it. But readers who’ve already understood the problems with police should be able to understand that we don’t need to empower police with surveillance.

The case for open borders may be the most needed, least understood by the most readers, and it’s very well done:

At least if done right!

Maybe the best chapters are those on war and nukes (the latter technically being a part of war, but one that it is critical and timely that we address).

There are, of course, people who want to work very hard for the abolition of one or more of these things while adamantly insisting on maintaining the others. We need to welcome those people into those campaigns they can support. There’s no reason one can’t abolish any one without the other six. There’s no reason to place any one upon a pedestal and declare its abolition necessary for the others. But there are systems of thinking and acting that cannot be abolished without abolishing all seven. There are changes that can best be made by abolishing all seven. And if we can united more of those who favor abolition of some of these into a coalition for the abolition of all of them, we will be stronger together.

THE WAR ABOLITION COLLECTION:
Abolishing State Violence: A World Beyond Bombs, Borders, and Cages by Ray Acheson, 2022.
Against War: Building a Culture of Peace by Pope Francis, 2022.
Ethics, Security, and The War-Machine: The True Cost of the Military by Ned Dobos, 2020.
Understanding the War Industry by Christian Sorensen, 2020.
No More War by Dan Kovalik, 2020.
Strength Through Peace: How Demilitarization Led to Peace and Happiness in Costa Rica, and What the Rest of the World Can Learn from a Tiny Tropical Nation, by Judith Eve Lipton and David P. Barash, 2019.
Social Defence by Jørgen Johansen and Brian Martin, 2019.
Murder Incorporated: Book Two: America’s Favorite Pastime by Mumia Abu Jamal and Stephen Vittoria, 2018.
Waymakers for Peace: Hiroshima and Nagasaki Survivors Speak by Melinda Clarke, 2018.
Preventing War and Promoting Peace: A Guide for Health Professionals edited by William Wiist and Shelley White, 2017.
The Business Plan For Peace: Building a World Without War by Scilla Elworthy, 2017.
War Is Never Just by David Swanson, 2016.
A Global Security System: An Alternative to War by World Beyond War, 2015, 2016, 2017.
A Mighty Case Against War: What America Missed in U.S. History Class and What We (All) Can Do Now by Kathy Beckwith, 2015.
War: A Crime Against Humanity by Roberto Vivo, 2014.
Catholic Realism and the Abolition of War by David Carroll Cochran, 2014.
War and Delusion: A Critical Examination by Laurie Calhoun, 2013.
Shift: The Beginning of War, the Ending of War by Judith Hand, 2013.
War No More: The Case for Abolition by David Swanson, 2013.
The End of War by John Horgan, 2012.
Transition to Peace by Russell Faure-Brac, 2012.
From War to Peace: A Guide To the Next Hundred Years by Kent Shifferd, 2011.
War Is A Lie by David Swanson, 2010, 2016.
Beyond War: The Human Potential for Peace by Douglas Fry, 2009.
Living Beyond War by Winslow Myers, 2009.
Enough Blood Shed: 101 Solutions to Violence, Terror, and War by Mary-Wynne Ashford with Guy Dauncey, 2006.
Planet Earth: The Latest Weapon of War by Rosalie Bertell, 2001.
Boys Will Be Boys: Breaking the Link Between Masculinity and Violence by Myriam Miedzian, 1991.