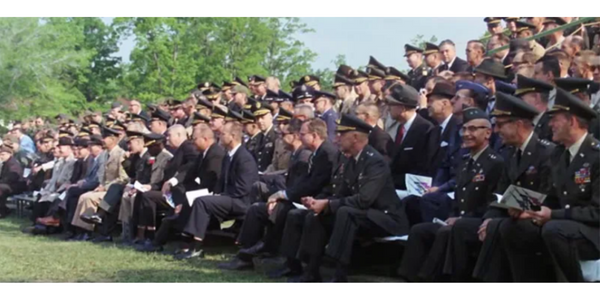 A preview of the film “Riotsville” is here.

There’s a good review of the film here, and another here.

In the late 1960s, the U.S. military built a fake town called Riotsville (or a fake “inner city” actually) on the Fort Belvoir base in Virginia, and then another at Fort Gordon in Georgia — the same state where the Atlanta police are now working on the construction of an enlarged, updated, high-tech Riotsville commonly called “Cop City.”

The film “Riotsville” includes some stunning footage of fake suppression of fake riots, with crowds of generals and police chiefs looking on from bleachers and cheering the brutal arrests of black “agitators” who have led peace demonstrators into such horrible actions as sitting down in a street (they get major doses of tear gas).

The film includes powerful narration denouncing the horrors of the time.

The film raises more questions than it tries to answer. Militarized classist and racist policing was not new in the 1960s. It’s not gone away since. Police are loaded up with military weapons today. They’re trained on major new complexes or in real cities or in public parks or in foreign countries or in combat with U.S. residents or Palestinians or in the wars that many police are veterans of — and not just police, but also military, border guards, immigration police, and private mercenary companies do all of these things — all of which is also not new.

How big a leap was taken in the 1960s? What role did militarized policing play in halting the social advances and activism of the 60s? The film seems to imply a major role, but is not explicit. How much of the drive behind the Riotsville rehearsals was training, and how much was public relations? Television news shows reported on the fake riot war games. The military created the riots as it wanted them and suppressed them as it wanted to, and filmed it all before a live studio audience.

Snipers were a common excuse for arming police with military weapons, and the Riotsvillians did trainings against snipers at Riotsville, even though snipers were (then, not know) a largely fictional scenario. Following the footage of counter-sniper trainings (i.e. sniper trainings) we see footage of white women buying and learning to use guns and professing their intent to kill if “necessary.” Was the military leading, following, or going with the flow of poisonous political winds?

The film sets its events in the context of the time, the riots, the war, the politics, and the Kerner Commission’s official mainstream report that concluded there was a need for massive investment in alleviating poverty and suffering but made only a single recommendation that the U.S. Congress actually acted on: investment in police. (The “news” footage we see on the Kerner Commission of course focuses on the time-honored HOWYAGONNAPAYFORIT? question, but — unlike anything you’d see today — actually mentions that a similar amount is being dumped into a war.)

There’s also some footage here of the DNC in Chicago and the RNC in Miami. “Riotsville” makes a case that we should pay more attention to the police violence in Miami. I wish the film had also mentioned the arrest and false prosecution of peace activists.

The main question I’d like to see investigated is that of what — if anything — might have worked better, and might work better now. I mean better than riots. What organized massive nonviolence might be most effective? What could have or still could move those in the pay of the wealthy to stop blaming and start helping the poor?