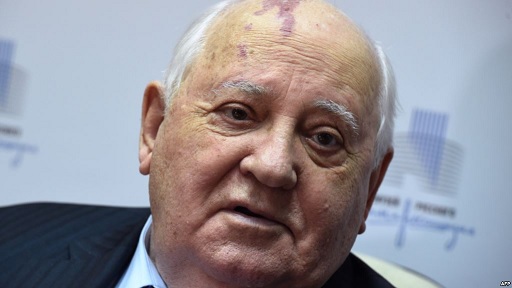 Mikhail Gorbachev, the last leader of the Soviet Union, called on the West to “restore trust” with Russia and warned that the two old adversaries are moving toward a renewed state of Cold War.

“All the indications of a Cold War are there,” he said in an interview with German newspaper Bild on April 14. “The language of politicians and the top-level military personnel is becoming increasingly militant. Military doctrines are formulated increasingly harshly. The media picks up on all of this and adds fuel to the fire. The relationship between the big powers continues to worsen.”

A new arms race between Russia and the West is already under way, Gorbachev said.

“It is not merely imminent. In some places, it is already in full swing. Troops are being moved into Europe, including heavy equipment such as tanks and armored cars. It was not so long ago that NATO troops and Russian troops were stationed quite far away from each other. They now stand nose-to-nose.”

Gorbachev said the new Cold War could turn into a hot one if both sides do nothing to prevent it. “Anything is possible” if the current deterioration of relations continues, he said.

Gorbachev cautioned the West against trying to force change in Russia through economic sanctions, saying the sanctions only galvanize public opinion against the West in Russia and bolster support for the Kremlin.

“Don’t have any false hope in this respect! We are a people willing to make whatever sacrifices we need to,” he said, noting that nearly 30 million Soviet soldiers and civilians died in World War II.

Instead, Gorbachev said Russia and the West need to find a way to restore trust, respect, and the willingness to working together. He said both sides can draw from a reservoir of good will that remains toward each other among ordinary citizens.

Russia and Germany, in particular “must reestablish contact, solidify, and develop our relationship, and find a way to trust each other again,” he said.

To repair the damage and renew understanding, the West “must take Russia seriously as a nation that deserves respect,” he said.

Instead of constantly criticizing Russia for not meeting Western standards of democracy, he said.the West should recognize that “Russia is on the path to democracy. It’s half way between. There are approximately 30 emerging nations that are in transition and we are one of them.”

Gorbachev traces the deterioration of relations to the West’s loss of respect for Russia and exploitation of its weakness after the dissolution of the Soviet Union in the 1990s.

That led the West — and particularly the United States — to break promises that were made to Russia at the end of the Cold War that NATO forces would “not move one centimeter further East,” he said.

Based on reporting by Bild.de