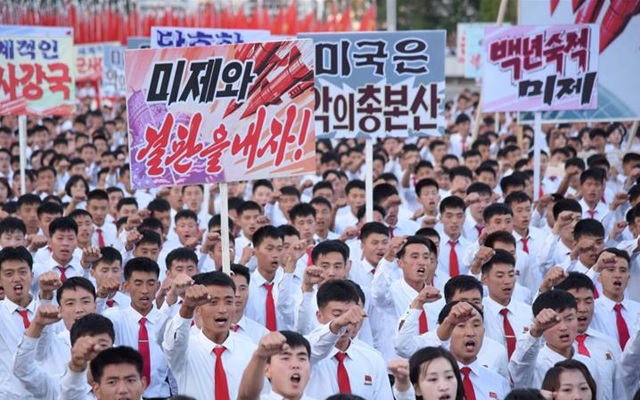 It just might be that the two Koreas are figuring out a way to avoid war, much to the anger and chagrin of President Trump and the U.S. national-security establishment, who are obviously increasingly viewing war as inevitable and even in the best interests of the United States.

Why, even the U.S. mainstream press, which oftentimes seems to operate as an ex officio spokesman for the U.S. government, appears irritated over North Korea’s initiation of talks with South Korea. The press describes North Korea’s overtures not as an attempt to avoid war but instead as a cynical attempt to “drive a wedge” between the United States and South Korea.

Actually, it’s President Trump, who is obviously upset that the Koreas are marginalizing him, that is using his ridiculous and dangerous tweeting abilities to further provoke North Korea, with the obvious intent of “driving a wedge” between North Korea and South Korea, a wedge that could conceivably sabotage talks between them.

The U.S. government and its acolytes in the mainstream press say that the problem is with North Korea’s nuclear development program.

Balderdash! The problem is with the Pentagon’s and CIA’s decades-old aim to effect regime change in North Korea, a Cold War aim that they have never been able to let go of. That’s why the Pentagon has some 35,000 troops stationed in South Korea. That’s why they have regular military exercises over there. That’s why they have those bomber fly-overs. They want regime change, bad, just like they still do in Cuba and Iran, and just like they wanted (and got) in Iraq, Afghanistan, Syria, Libya, Chile, Guatemala, Indonesia, and so many other countries.

That’s why North Korea wants nuclear bombs — to protect its communist regime by deterring the United States from attacking and fulfilling its decades-old aim of regime change. North Korea knows that a nuclear deterrent is the only thing that might deter the Pentagon and the CIA from attacking.

North Korea also has seen what happens to impoverished Third World regimes that don’t have nuclear weapons, like Iraq, Afghanistan, and Libya. They go down quickly to defeat and regime change at the hands of an all-powerful First World country.

Keep in mind also that U.S. interventionism into the Korean War was always illegal under our form of constitutional government. The Constitution, which the president, the Pentagon, and the CIA, swear to uphold, requires a congressional declaration of war. There was never a congressional declaration of war against North Korea. That means that U.S. troops and CIA agents had no legal right to kill anyone in Korea, not with rifles, artillery, carpet bombing, or with the use of germ warfare against the North Korean people.

The Pentagon and the CIA claimed that it was necessary to illegally intervene in Korea because the communists were coming to get us. It was a lie, just as the entire Cold War was a lie. It was all just one great big fear-mongering racket to solidify the power and control of the military and intelligence services over the American people.

Those 35,000 U.S. troops in Korea today have no business being there, not only because the communists are still not coming to get us but also because they are simply the outgrowth of the original illegal intervention in the 1950s. The Pentagon has those troops there for one reason and only one reason: No, not to defend and protect the South Korean people, who are of minor importance to U.S. officials compared to the United States, but rather to serve as “tripwire” to guarantee U.S. involvement should war once again break out between the two Koreas.

In other words, no congressional deliberation on a declaration of war on whether to get involved should war break out. No national debate. Once tens of thousands of troops are automatically killed, the United States is, as a practical matter, stuck, trapped, committed. That’s why the Pentagon and the CIA have those troops there — to box in the American people — to deprive them of a choice on whether to get involved in another land war in Asia or not.

That makes U.S. soldiers in Korea nothing more than little pawns. Their assigned role is to die in order to ensure that Congress has no say on whether the U.S. gets involved in another land war in Asia. The Pentagon and the CIA, not Congress, remain in charge.

Why hasn’t the U.S. already attacked North Korea? One big reason: China. It says that if the United States starts the war, it’s coming in on the side of North Korea. China has lots of troops that could easily be sent into Korea to fight against U.S. forces. It also has a nuclear capability that can easily hit the United States.

So, that leaves Trump and his national security establishment doing their best to provoke North Korea into “firing the first shot,” or at least making it look like they have fired the first shot, like what happened at the Gulf of Tonkin or what the Pentagon hoped to accomplish with Operation Northwoods and a concocted war against Cuba.

If Trump can successfully taunt, tease, antagonize, and provoke North Korea into attacking first, then he and his national-security establishment can exclaim, “We’ve been attacked by the communists! We’re shocked! We’re innocent! We have no choice but to protect America by carpet-bombing North Korea again, this time with nuclear bombs.”

That’s why the South Koreans are smart in agreeing to talk to North Korea. If they were really smart, they would give Trump, the Pentagon, and the CIA the boot. The best thing South Korea could ever do is immediately kick out every U.S. soldier and every CIA agent out of their country. Send them packing back to the United States.

Sure, Trump would be hopping bad, just as the Pentagon and the CIA would be. So what? It would be the best thing that could ever happen to Korea, the United States, and the world.

Jacob G. Hornberger is founder and president of The Future of Freedom Foundation