Immigrants’ and workers’ rights and cuts to military spending were the focus of a pair of rallies and marches on May Day in Seattle. 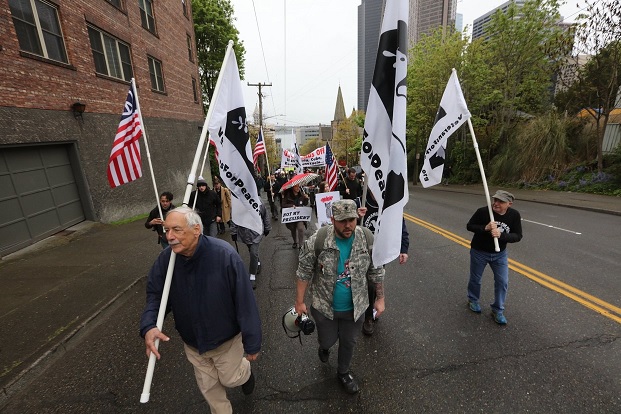 Thousands of May Day marchers took to the streets in Seattle Monday to demand an end to deportations, affirm the need for strong labor laws and voice concerns about xenophobia, racism and military spending.

A variety of viewpoints and causes were given voice during a day of protests that included tense exchanges between pro- and anti-President Trump protesters in Westlake Park. Police reported five people were arrested in and around Westlake for a variety of offenses, including hurling a rock, possession of a knife, obstruction and theft of a protester’s flag.

The turnout in Westlake Park and for other May Day protests was smaller than in previous years, prompting Seattle Mayor Ed Murray to note the numbers were the “smallest I’ve seen“ in his four years as mayor. Police spent much of the afternoon and early evening keeping the pro- and anti-Trump groups separated.

Tensions seemed to die down in early evening when the opposing groups began passing around “peace joints” and drinking Pepsi. A few drew some laughs mocking the controversial Pepsi ad that showed Kendall Jenner stepping away from a modeling shoot to join a crowd of smiling, young protesters.

Pepsi pulled the ad after it was widely mocked and criticized for appearing to trivialize protests for social-justice causes.

However, when tensions again flared, police issued a dispersal order and cleared the park by 8 p.m. The crowd milled around for another hour or so before most had left downtown.

The day began with an anti-war rally in downtown Seattle, as a veterans group called for cuts to military spending and an end to war. That protest, which ended at Judkins Park, joined up with the day’s second march, the annual March for Workers and Immigrants Rights, which began at Judkins and ended at Seattle Center.

The second march, loud but peaceful, was closely followed by Seattle police on bicycles.

At Judkins before the immigrant and workers march, a series of speeches focused on immigrant rights but also touched on opposition to the planned King County youth jail, the Black Lives Matter movement and environmental causes. The overarching theme: Opposition to Trump and his policies.

Weiner, who said she also marched during the Vietnam War and the civil-rights movement, said people are recognizing “that all of these things are interconnected … and we have to work together.

“The new ‘in’ word is intersectionality,” she added. “Some of us have been saying that for 50 years.”

Peter Costantini, a volunteer for One America, an immigrant-rights group, said he’s been helping with workshops to teach immigrants about their rights.

“This is a really scary time,” he said. “It breaks my heart to hear what people are saying” about fears of staying in the U.S.

Seattle City Councilmember Kshama Sawant told the crowd she believed Trump is in a crisis mode “thanks to our movement,” but also said that in order to defeat him, “our movement has to be far larger.”

Sawant had raised eyebrows when she called for May Day strikes and “peaceful civil disobedience that shuts down highways, airports, and other key infrastructure” in an article in a Socialist publication.

But when the marchers reached Interstate 5, police in riot gear blocked the entrance and no one attempted to divert the march onto the freeway.

The march wound by Seattle University, where some faculty members held signs in support of a union for contingent faculty. Contingent, or adjunct, faculty voted to form a union two years ago, but the university has said it will not bargain with the union and is taking the fight to federal court.

The march seemed to pick up more people as it went along, and by the time it reached downtown Seattle it stretched for four or five blocks. Office workers came out of their buildings, or watched from windows high above the route.

A phalanx of police on motorcycles escorted marchers to Seattle Center as indigenous peoples from the Mayan, Perepecha, Mexicas and Nahuatl tribes in Mexico led the way with song and drums to a stage in front of Fisher Pavilion.

There, members of the Duwamish Tribe led prayers for unity among all people, protection of the environment and universal justice.

The Pierce County Prosecutor’s Office concluded that the shooting of Salyers was justified after she drove toward officers trying to arrest a man riding with her who had several outstanding warrants.

But even in her heartbreak, Rideout kept with the overriding message of love, telling the crowd that she loved every one of them.

“I genuinely care about and love every person I meet,’’ she said after her speech. “It brought tears to my eyes to feel the love and support and understanding here today. We need to take care of one another.”

The peaceful, prayerful gathering wrapped up with a plea for families displaced by development in SeaTac, and a call to tacos at a nearby food truck.

Earlier in the day, Dan Gilman, president of Veterans for Peace, said the billions of dollars spent on the military should instead go to human services.

Gilman spoke out against the Trump administration’s plan for a $54 billion increase in military spending. Gilman served in the Army during the Vietnam War.

“The military is getting the bulk of money and resources that should be going to human and social needs,” he said before the veterans rally. “It’s absurd the amount of money we spend for war and it never seems to get us anywhere.”

A group of musicians and an artist collective staged an impromptu “pop-up bloc party” outside the King County Youth Services Center to protest the incarceration of marginalized youth and migrants.

Rap artist Bypolar, 31, said he and other members of High Gods Entertainment, “an art collective for radical change,” set up music equipment outside the south wall of the center in hopes that juveniles inside would hear the music and feel supported.

“We’re not for prisons at all. We need to invest that money into our communities,” thereby addressing the underlying causes of crime, Bypolar said. “I’m saying there are other avenues. Prisons aren’t the answer.”

In recent months, activists, including Seattle rapper Macklemore, have put pressure on King County officials over a proposal to build a new youth jail in the Central District. Mayor Murray sent a letter in late January asking the county to reconsider the project’s design, which the county’s judges defended.

At St. Mark’s Cathedral on Capitol Hill, about 200 people from several congregations gathered Monday morning to announce the relaunch of the “sanctuary” movement, offering help and protection to immigrants threatened with deportation.

The original sanctuary movement began in the 1980s as churches provided refuge to immigrants fleeing civil wars in Central America. It was revitalized amid stepped-up immigration raids at the end of the George W. Bush administration.

Now, amid Trump’s promises to crack down on illegal immigration, faith communities again see the need to step in.

Congregations throughout the area have been planning how to do this for months, and in some cases are gearing up to house immigrants, as well as offering other assistance, such as legal services. Churches, synagogues and mosques are taking part, according to Michael Ramos, executive director of the Church Council of Greater Seattle, who organized the Monday gathering.

Thousands of people took to the streets across the nation Monday to march in May Day rallies, calling for immigration reform, workers’ rights and police accountability.

Galvanized by Trump’s initiatives on immigrants in the country illegally, diverse crowds of demonstrators held peaceful rallies in cities such as Los Angeles, Chicago, New York City and Miami.

In Portland, police made several arrests during May Day protests in their city. Police asked everyone to stay away from downtown as fires were set and fireworks, smoke bombs and Molotov cocktails were being thrown at police.

In Olympia, police said up to 10 people were taken into custody after a couple officers were injured by thrown rocks. Windows were broken at area businesses.

International Worker’s Day, also referred to as May Day, marks the date of the Haymarket affair of 1886, when industrial workers in Chicago went on strike as part of the movement for an eight-hour workday. Police tried to break up the strike, clashing with demonstrators. During the violence, someone detonated a bomb, killing a police officer. More strikers and officers were killed in ensuing riots.

Unions commemorate the day as part of the movement for an eight-hour workday, and political groups see it as a rallying cause.

In recent history, pro-labor movements across the U.S. have used May 1 to demonstrate for better wages and working conditions. Immigration groups in 2006 began to use the day for rallies calling for immigration reform.

In Seattle, strikes on May 1 date back to 1919. Demonstrations in recent years have been mostly peaceful, with labor and immigration groups holding festive marches.

But for five consecutive years, black-clad protesters, who have identified as anarchists and anti-capitalists, have clashed with police and vandalized areas of Seattle. During last year’s May Day protests, five officers were injured and nine people were arrested.

In preparation for the potential for violence, Starbucks Reserve Roastery and Tasting Room on Capitol Hill was boarded up before Monday’s protests.