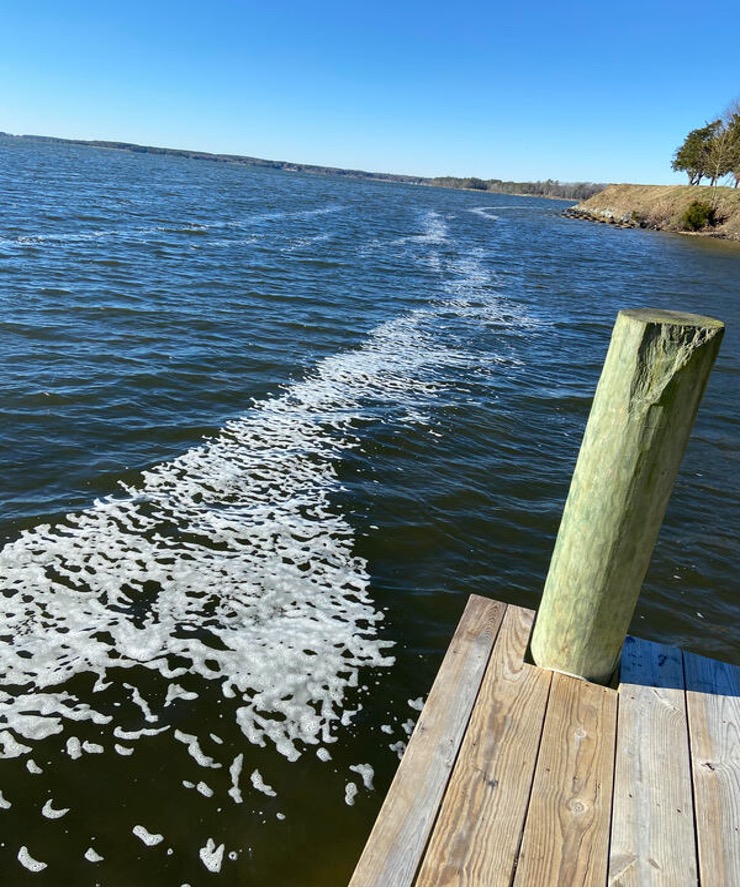 The Patuxent River Naval Air Station (Pax River) and the Naval Facilities Engineering Systems Command (NAVFAC) have reported that groundwater at Pax River’s Webster Outlying Field in St. Inigoes, MD contains 84,757 parts per trillion (ppt) of Perfluorooctanesulfonic acid, (PFOS). The toxins were detected at Building 8076 also known as Fire Station 3. The level of toxicity is 1,200 times the 70 ppt federal guideline.
​
The groundwater and the surface water from the small naval installation drain into St. Inigoes Creek, a short distance to the Potomac River and the Chesapeake Bay.

The chemicals are linked to a host of cancers, fetal abnormalities, and childhood diseases.

The Navy also reported PFOS totals at the main Pax River base at 35,787.16 ppt. The contamination there flows into the Patuxent River and the Chesapeake Bay.

A discussion of the contamination at both locations will be presented to the public during a hastily announced NAS Patuxent River Restoration Advisory Board (RAB) meeting scheduled for April 28th, from 6:00 pm to 7:00 pm, the Navy announced on April 12th. The navy has not reported on PFAS levels in surface water.

The navy is seeking questions from the public about PFAS at Pax River and Webster Field via email at pax_rab@navy.mil  Emailed questions will be accepted until Friday, April 16. See the Navy’s press release here. Also see the Navy’s  PFAS Site Inspection PDF.  The document contains newly released data from both sites. The one-hour meeting will include a brief on the new results and a question and answer session with representatives from the navy, the U.S. Environmental Protection Agency, and the Maryland Department of Environment.

The public can join the virtual meeting by clicking here. 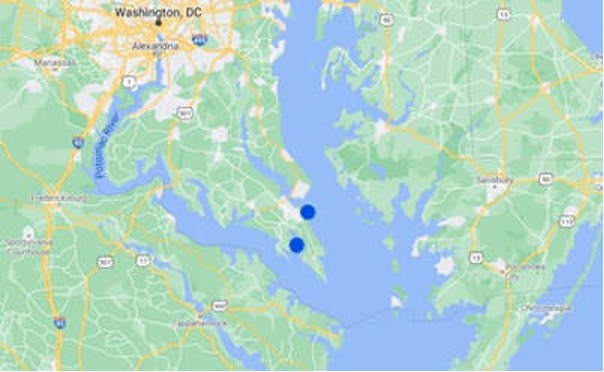 Webster Field occupies a peninsula between St. Inigoes Creek and the St. Mary’s River, a tributary of the Potomac. The Webster Outlying Field annex is home to the Naval Air Warfare Center Aircraft Division, along with Coast Guard Station St. Inigoes, and a component of the Maryland Army National Guard.
​
Building 8076 is adjacent to the aqueous film-forming foam (AFFF) Crash Truck Maintenance Area where trucks using foams containing PFAS were regularly tested.  The site is less than 200 feet from St. Inigoes Creek.  The practice, according to the Navy, was discontinued in the 1990’s, although the contimination continues. The high PFAS levels recently reported are a testament to the staying power of the so-called “forever chemicals.” 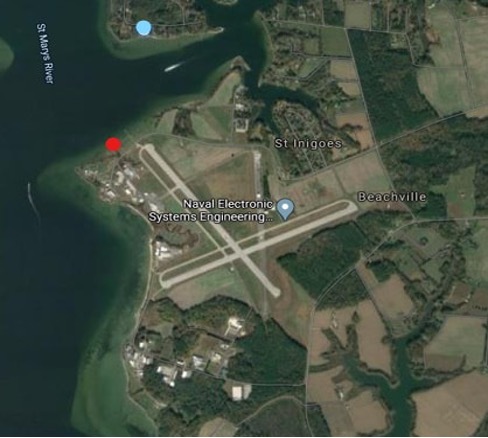 In February, 2020 I tested the water on my beach on St. Inigoes Creek in St. Mary’s City for PFAS. The results I published shocked the community.  The water was shown to contain a total of 1,894.3 ppt of PFAS with 1,544.4 ppt of PFOS. 275 people packed into the Lexington Park Library in early March, 2020, immediately before the pandemic, to hear the navy defend its use of PFAS.

Many were more concerned with the quality of the waters in the creeks and the rivers and the Chesapeake Bay than the drinking water. They had many unanswered questions for the navy. They were worried about contaminated seafood. 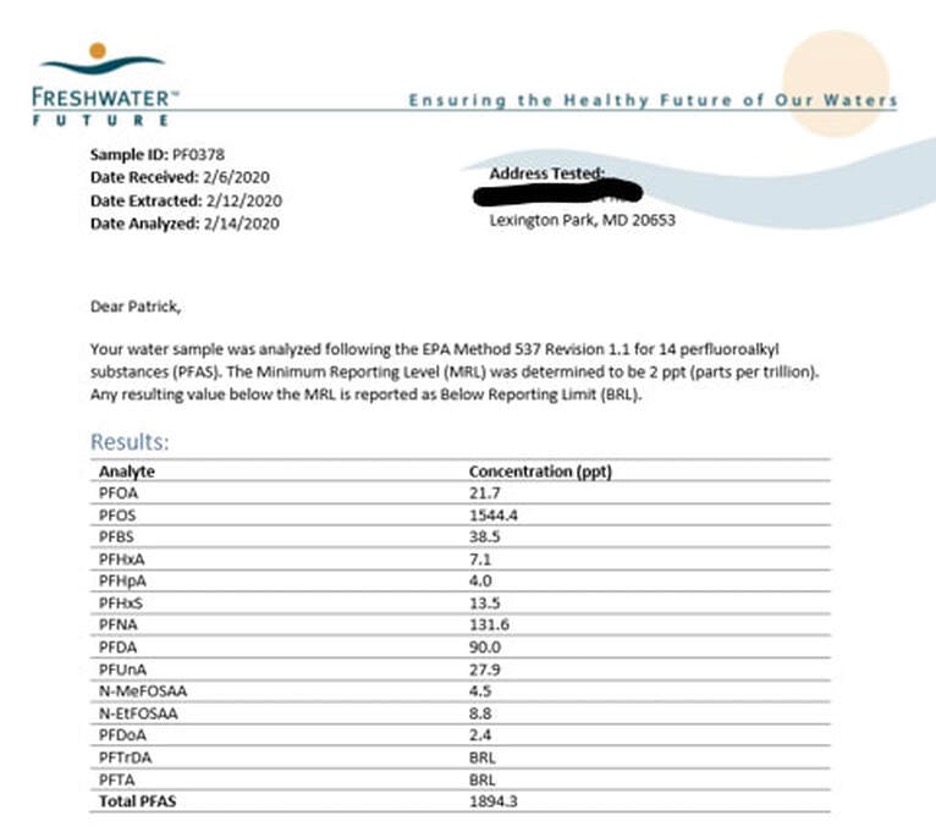 These results were generated by the University of Michigan’s Biological Laboratory using EPA method 537.1.

The Navy has only tested for  PFOS, PFOA, and PFBS. It  fails to address the  levels of 11 other types of harmful PFAS found in St. Inigoes Creek: PFHxA, PFHpA, PFHxS, PFNA, PFDA, PFUnA, PFDoA, PFTrDA, PFTA, N-MeFOSAA, NEtFOSAA.  Instead, Patrick Gordon, NAS Patuxent River Public Affairs Officer questioned the “veracity and accuracy” of the results.
​
This is pretty much a full court press.  Environmentalists don’t stand much of a chance while trying to warn the public of the dangers posed by these toxins. The Navy wants to be left alone. The Maryland Department of the Environment doesn’t give a damn and is willing to falsify the record of contamination.  Maryland’s health department has deferred to the Navy. The County Commissioners aren’t leading the charge. Senators Cardin and Van Hollen have been largely silent, although Rep. Steny Hoyer has recently shown some signs of life on the issue. The watermen see a threat to their livelihood.

In response to the findings last year, Ira May, who oversees federal site cleanups for the Maryland Department of the Environment, told the Bay Journal that contamination in the creek, “if it exists,” could have another source. The chemicals are often found in landfills, he noted, as well as in biosolids and at sites where civilian fire departments sprayed foam. “So, there are multiple potential sources,” May said. “We’re just at the beginning of looking at all of those.”

Was the state’s top guy covering for the military? Fire stations in Valley Lee and Ridge are about five miles away, while the closest landfill is 11 miles away. My beach is 1,800 feet from the AFFF releases.

It’s important to come to an understanding of the fate and transport of PFAS. The science isn’t settled. I found 1,544 ppt of PFOS while the Webster Field  groundwater on the facility had 84,000 ppt of PFOS. Our beach sits on a cove  north-northeast of the base while the prevailing winds blow from the south-southwest – that is, from the base to our beach. The foams gather with the tide on many days.  Sometimes the foam is a foot high and becomes airborne. If the waves are too high the foam dissipates.

Within about 1-2 hours of high tide, the foams dissolve into water, like dish detergent bubbles left alone in the sink. Sometimes we can see the line of foam begin to form as it hits the shelf of the creek. (You can see the differences in the depths of the water in the satellite image above.)  For approximately 400 feet the water in front of our house is about 3-4 feet deep at low tide. Then, suddenly it drops to 20-25 feet. That’s where the foams begin to build and move toward the beach.

There are other factors to consider regarding the fate and transport of PFAS in water. For starters, PFOS is the great PFAS swimmer and can travel for miles in groundwater and in surface water. PFOA, on the other hand, is more stationary and tends to contaminate the land, agricultural produce, beef, and  poultry. PFOS moves in the water, as is evidenced in the University of Michigan results.

After my water results were discredited by the state I tested the seafood from the creek for PFAS. Oysters were found to have 2,070 ppt; crabs had 6,650 ppt; and a rockfish was contaminated with 23,100 ppt of the substances.
This stuff is poison.  The Environmental Working Group  says we ought to keep the consumption of  these chemicals under 1 ppt daily in our drinking water.  More importantly, the European Food Safety Authority says 86% of the PFAS in humans is from the food they consume, especially the seafood.
​
The state of Michigan tested 2,841 fish  for various PFAS chemicals and found the average fish contained 93,000 ppt. of PFOS alone. Meanwhile, the state limits drinking water to 16 ppt – while people are free to consume fish with thousands of times more of the toxins. The 23,100 ppt found in our rockfish may seem low compared to the Michigan average, but Webster Field is not a major airbase and cannot service the Navy’s large fighters, like the F-35. Larger installations typically have higher PFAS levels.

​=============
“It is a curious situation that the sea, from which life first arose should now be threatened by the activities of one form of that life. But the sea, though changed in a sinister way, will continue to exist; the threat is rather to life itself.”
― Rachel Carson, The Sea Around Us
==============

Although the navy says, “There is no current complete exposure pathway to people from releases of PFAS to on or off base receptors,” they’re only considering drinking water sources, and even this claim may be challenged. Many homes in the predominately African American Hermanville community, which straddles the west and south sides of the Pax River base, are served by well water.  The navy has refused to test these wells, claiming that all of the PFAS from the base runs into the Chesapeake Bay.

The navy says,  “The migration pathway to receptors found adjacent to and off the base boundary through private water supply wells does not appear to be complete based on surface water and groundwater flow. Flow direction for these two media are away from the private communities located on the west and south sides of the Station and flow direction is towards the Patuxent River and Chesapeake Bay to the north and east.”

The navy isn’t testing the community’s wells because they say all of the toxins are draining into the sea. The St. Mary’s County Health Department says it trusts the navy’s findings regarding the toxic plumes of contamination.

Please, try to attend the RAB meeting scheduled for April 28th, from 6:00 pm to 7:00 pm. See the instructions for joining the meeting here.

The navy is seeking questions from the public about PFAS at Pax River and Webster Field via email at pax_rab@navy.mil  Emailed questions will be accepted until Friday, April 16.

Here are a few sample questions: