South Korean President Park Geun-Hye now has an approval rating of 5%.  Last Saturday reportedly one million citizens marched to the gates of the Blue House demanding her immediate resignation.  The momentum is building across the nation for a change in government.

This was the largest protest South Korea has seen since the democratic uprising of June 1987. Seoul Mayor Park Won-soon refused to supply water from the city’s fire hydrants to the police, which had threatened to use water cannons to block protesters.

The US-backed President Park (daughter of former dictator) has been unpopular all along but recent public disclosures that Park allowed her friend, Choi Soon-sil, to access government documents without clearance has created a massive scandal. Ms Choi is accused of trying to extort huge sums of money from South Korean companies and is under arrest on charges of fraud and abuse of power. She was detained last week on suspicion of using her friendship with President Park to solicit business donations for a non-profit fund she controlled. 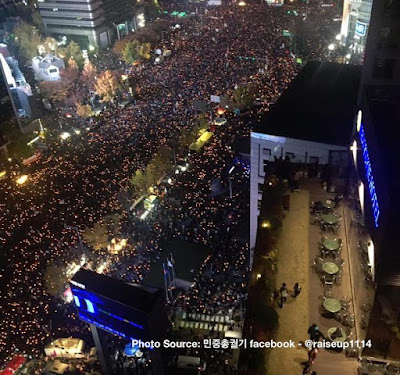 Washington fears that the resignation of President Park would disrupt the Pentagon’s plan to continue major military escalations on the Korean peninsula as part of its ‘pivot’ of significant portions of US military operations into the Asia-Pacific to encircle China and Russia.

Included in this Pentagon expansion would be the deployment of the THAAD (Terminal High Altitude Area Defense) missile defense (MD) system.  While the Pentagon maintains that THAAD is aimed at North Korea experts have indicated that its true military mission would be to help intercept Chinese and Russian retaliatory responses after a US first-strike attack.

The residents of the melon farming community of Seongju, where THAAD was first announced to be deployed, have been in daily resistance against the provocative MD system and this issue has galvanized the peace movement throughout South Korea in recent months.  The US has hurriedly announced that they plan to deploy the system sometime in the next eight months but the growing opposition to President Park has complicated this controversial decision. 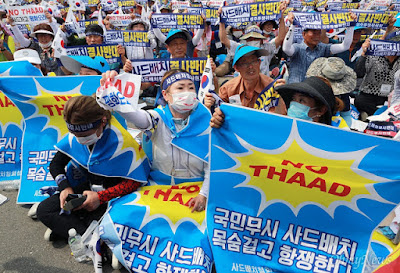 THAAD is manufactured by Lockheed Martin at a facility in Troy, Alabama while the Army’s Missile Defense Directorate is located at the Redstone Arsenal in nearby Huntsville.  THAAD is tested at White Sands Missile Range, New Mexico.

In order to build opposition to any THAAD deployment in South Korea a ‘Task Force to Stop THAAD in Korea and Militarism in Asia and the Pacific’ has been created and groups from around the globe have signed on as endorsers.  The call is for peace groups everywhere to learn more about the role of THAAD and other US MD systems (such as PAC-3 and Navy Aegis destroyer-based SM-3 interceptors) and to build opposition to these destabilizing programs that are being used by the Pentagon to surround China and Russia.  You can see the call and endorsers of the Task Force here.

US MD systems on-board Aegis destroyers will be also ported at the new Navy base on Jeju Island and residents of Gangjeong village are now in their ninth year of daily non-violent resistance against the base.

How a new Trump administration will deal with the Pentagon ‘pivot’ and deployment of MD systems around the world is unknown.  But the South Korean peace movement is not waiting to find out as they continue to expand their opposition to these US military moves.  The current campaign demanding the resignation of President Park Geun-Hye adds an additional complication for the already over extended US military empire.

Close all US bases overseas!
No MD!
Convert the military industrial complex to peaceful and sustainable production!
Use our resources to deal with climate change and growing poverty!