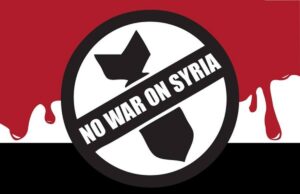 On Thursday night, Donald Trump attacked Syria with over 50 Tomahawk missiles. We don’t know who caused the chemical attack in Idlib province, but U.S. bombs will not help the situation. The Syrian civil war must be solved by diplomacy, not more bombs.

A new U.S. war against Syria’s government is not the answer to the catastrophic Syrian civil war.

Whoever is responsible for the recent use of chemical weapons, a war against a sovereign country is certainly not the answer. As we learned in Iraq, once started there is no telling where such a war will go and what impact it might have. The Iraq war gave us ISIS. Who knows what this one will give us after all the triumphalism in Washington fades.

If the Assad regime used chemical weapons, it is a war crime and should be dealt with through the International Criminal Court. If the extremist militias that we and our allies support in Syria are responsible for the chemical attack, they should be brought before international tribunals.

The lives of Arab women and children are of no concern to this frightening administration in Washington. If we really want to protect the lives of tens of thousands of women and children in the Middle East, we should end our military and political support for rebels in Syria and for Saudi Arabia’s savage destruction of Yemen.

If Trump is so concerned about children being killed in gruesome ways, why is he killing so many of them in Yemen? Do we really trust Exxon’s CEO to decide who we go to war with (Syria) and whose wars we help in every way possible (Saudi Arabia)?

Trump’s war on Syria is a major breach of both international and U.S. law. Impeachment would be an appropriate response. Congress must come back into session immediately to stop this war and to debate our Syria policy.