How to stop weapons of mass destruction aimed at Africa

In Africa, as in the Middle East, the US is creating a vicious circle of war and destabilization. Libya like Iraq became a failed state after US-led regime change in 2011. Trouble and a deepening refugee crisis followed regime change. This contributed to the destabilization of North African countries and effected sub-Saharan countries. Fallout from the 2011 intervention led inexorably to the worsening situation in Libya today.

Now the vicious circle of killing and instability will run at a furious pace as the US Department of Defense (DOD) shifts the speed of war in the Middle East and Africa. A strategically important navy base located opposite Libya on the Mediterranean houses the global military telecommunications system known as MUOS.

The MUOS (Mobile User Objective System) phases in the seamless exchange of data at higher bit rates than ever before. Sending and receiving information and encrypted messages will reach breakneck speeds for troops on the ground, in the air or at sea. The network consists of five satellites connected to four ground stations covering more than three-quarters of the globe—even reaching the Arctic. What this really means is global control of remotely piloted drones, missiles and nuclear weapons, making MUOS the mother of all weapons of mass destruction­.

The kingpin of the MUOS system is a naval base on the Italian island of Sicily, the largest island in the Mediterranean and closest European neighbor to Tunisia and Libya. While the three other MUOS ground stations are in Hawaii, Virginia and Australia, Sicily’s position in the Mediterranean affords the Pentagon eyes and ears all over Africa and the Middle East. This, writes Sicilian journalist Antonio Mazzeo, is “the perfect weapon for the conflicts of the twenty-first century.”

Yet Sicily is not the perfect location. A grassroots campaign organized by the local population shines a full beam on the corruption and illegality surrounding construction of the base. Sicilian residents unintimidated by US power have put up powerful resistance against the presence of MUOS in their home country.

To get a glimpse of the MUOS you must travel to the heart of south central Sicily, where olive groves make chequerboards over sun-baked hillsides, Vespas buzz past the morning tractor brigade and village streets wave a palm tree salute as the bougainvillea climbs over walls to greet you in every shade of red. In these idyllic surroundings the DOD has built its most strategically important military base for Africa and the Middle East.

The base is built on a protected nature reserve 3km from the centre of Niscemi, a town of 28,000. Upon entering the Riserva Naturale Sughereta di Niscemi, the first thing you see is a towering antenna. It’s one of 41 that make up the pre-existing Naval Radio Transmitter Facility (NRTF) military base built on this reserve in 1991. 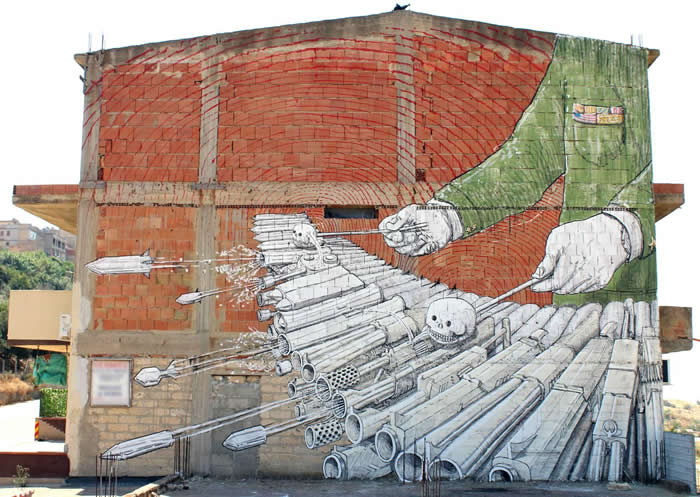 Down a red dirt road you pass a military checkpoint, complete with camouflage painted jeeps and armed soldiers. The Italian army guards the base, a centerpiece of three 20-meter satellite dishes. The park’s cicadas chatter a staccato rhythm around the dishes. A majestic cork oak forest once stood here until the navy bulldozed the trees to clear a space for the MUOS.

All at once the cicadas break their reverie. Two soldiers approach to ask questions and check identification. This is business as usual in Niscemi. Police routinely stop and search cars, often handing out heavy fines for noncriminal offences such as CD copying or seatbelt violation.

The name Niscemi derives from Arabic. Today, the town has substantial North African communities from Tunisia and Morocco. In fact, the whole of Sicily is a mixture of different cultures—a melting pot pouring through Sicilian veins. The soil itself is a mixture. In this part of the world the distinctive terra rossa carries traces of ancient mineral dust from Africa’s Sahara and Sahel.

One thing that will not mix is the MUOS. You cannot deploy a weapon of mass destruction from inside of a melting pot. It will not work.

The people of Niscemi have opposed MUOS since construction of the base became known to them in 2009. They are vehemently against the militarization of Sicily. Over 100 US military bases exist on Italian soil—more than any other country after Japan, Germany and South Korea. Sicily is increasingly becoming a launching pad for the Pentagon’s wars across the Mediterranean. In February, Italy confirmed the US flies armed drones to Libya from Sigonella naval air station in Sicily.

While Sigonella is at once a US base as well as NATO’s biggest Mediterranean base, Niscemi is exclusively a US base. Therefore, Italian Parliament should be asked for approval of construction of the base. Parliament was not consulted.

Furthermore, MUOS builders hired by the navy lacked the crucial anti-mafia certificate required by law before building can begin. An Italian court confirmed the MUOS was constructed illegally. Unraveling the layers of corruption is unduly complicated. Certainly the DOD took full advantage of this complexity to push construction of the base past the normal legal procedures.

Amid the legal ping-pong, The DOD is depending on the Italian government to do everything in its power to make the base operational despite local opposition demanding the immediate closure of the base. There is pressure on activists too. 129 protestors received summonses for entering the base during a demonstration three years ago. Then on 5 September, the Committee No MUOS was shocked to discover personnel from the Niscemi mayor’s office illegally entered and ransacked the No MUOS headquarters.

The guerra di carta or paper war continues. The “supreme administrative court” in Sicily said the Italian government legally authorized the MUOS construction. Activists await the final word on an appeal of this de-requisition from the Supreme Court of Appeals. The court may decide to impose conditions included in the 1947 Paris peace treaties which forbid the construction of any US military installations in Italy.

Niscemi isn’t like other bases. Pre-MUOS bases use the legacy satellite system. Ramstein Air Base in Germany is a satellite relay station that supports communication between drone operators in the US and US drones in Yemen, Somalia and Afghanistan. Britain’s Menwith Hill Royal Air Force base uses spy satellites for US drone strikes in the Middle East and Africa. The Intercept reports Djibouti and Niger are currently the most important countries for US drone bases and military operations in North and West Africa.

The Obama administration carries out targeted killings, many of them on innocent civilians. US drones have killed hundreds of civilians under Obama and injured thousands. The US claims its recent bombing of Syrian troops was accidental. Meanwhile, between 1 August and 9 September, the US carried out over 140 airstrikes against the Islamic State (Daesh) in Libya’s town of Sirte.

MUOS technology employs a whole new satellite system built to enhance the speed and automation of war by connecting all elements of the military onto a single network. This doesn’t guarantee a safer system. The high-speed weapon of mass destruction in the Mediterranean that’s poised to attack Africa and the Middle East is not an end to mistakes. It can create a higher number of inaccuracies, with more frequency and with more acute errors.

Protestors will converge on Niscemi on 2 October for a national demonstration. The event coincides with the Keep Space for Peace global week of action against militarization. Actions will also take place in the UK, North America, Australia, Venezuela, Norway, India, South Korea, Mauritius and Canada.