Strengthen the International Court of Justice

(This is section 41 of the World Beyond War white paper A Global Security System: An Alternative to War. Continue to preceding | following section.) 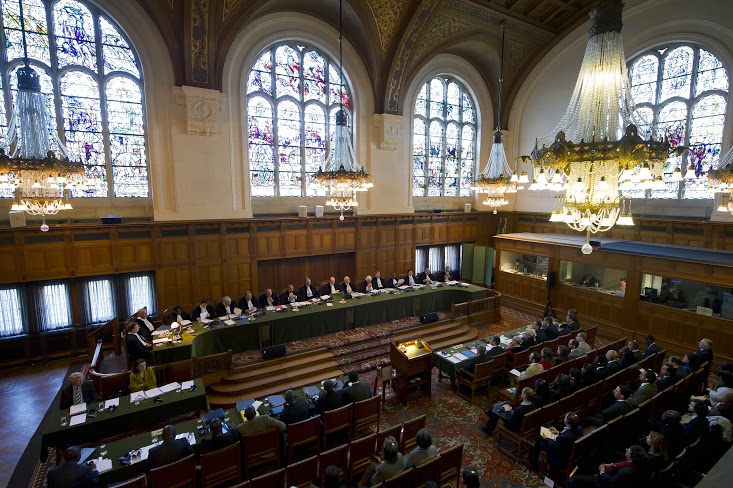 The ICJ or “World Court” is the principal judicial body of the United Nations. It adjudicates cases submitted to it by the States and gives advisory opinions on legal matters referred to it by the UN and specialized agencies. Fifteen judges are elected for nine year terms by the General Assembly and the Security Council. By signing the Charter, States undertake to abide by the decisions of the Court. Both State parties to a submission must agree in advance that the Court has jurisdiction if it is to accept their submission. Decisions are only binding if both parties agree in advance to abide by them. If, after this, in the rare event that a State party does not abide by the decision, the issue may be submitted to the Security Council for actions it deems are necessary to bring the State into compliance (thus running into a Security Council veto).

The sources of the law on which it draws for its deliberations are treaties and conventions, judicial decisions, international custom, and the teachings of international law experts. The Court can only make determinations based on existing treaty or customary law since there is no body of legislative law (there being no world legislature). This makes for tortuous decisions. When the General Assembly asked for an advisory opinion on whether the threat or use of nuclear weapons is permitted under any circumstances in international law, the Court was unable to find any treaty law that permitted or forbade the threat or use. In the end, all it could do was suggest that customary law required States to continue to negotiate on a ban. Without a body of statutory law passed by a world legislative body, the Court is limited to existing treaties and customary law (which by definition is always behind the times) thus rendering it only mildly effective in some cases and all but useless in others.

Once again, the Security Council veto becomes a limit on the effectiveness of the Court. In the case of Nicaragua vs. The United States – the U.S. had mined Nicaragua’s harbors in a clear act of war – the Court found against the U.S. whereupon the U.S. withdrew from compulsory jurisdiction (1986). When the matter was referred to the Security Council the U.S exercised its veto to avoid penalty. In 1979 Iran refused to participate in a case brought by the U.S, and did not abide by the judgment. In effect, the five permanent members can control the outcomes of the Court should it affect them or their allies. The Court needs to be independent of the Security Council veto. When a decision needs to be enforced by the Security Council against a member, that member must recuse itself according to the ancient principle of Roman Law: “No one shall be judge in his own case.”

The Court has also been accused of bias, the judges voting not in the pure interests of justice but in the interests of the states that appointed them. While some of this is probably true, this criticism comes often from States that have lost their case. Nevertheless, the more the Court follows rules of objectivity, the more weight its decisions will carry.

Cases involving aggression are usually brought not before the Court but before the Security Council, with all of its limitations. The Court needs the power to determine on its own if it has jurisdiction independent of the will of States and it then needs prosecutorial authority to bring States to the bar.

See other posts related to “Managing International and Civil Conflicts”