Summary of A Global Security System: An Alternative to War 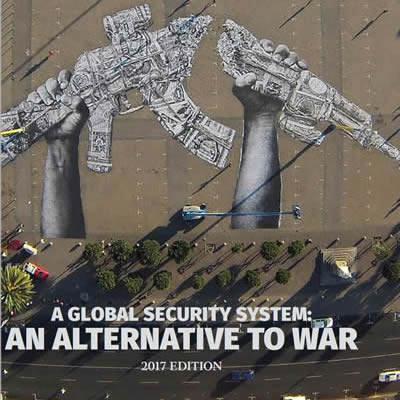 Summary of the full book.

If you want peace, prepare for peace.

World Beyond War asserts that war itself can be ended. We are now in a state of permanent war. Methods of nonviolent conflict management have been developing that lead World Beyond War to assert that it is time to end warfare. It begins with a Vision of Peace. It then continues to describe the means for achieving it. The report presents how the current war system works, the desirability and necessity of replacing it, and an analysis of why it is possible. The Alternative Global Security System rejects the failed system of national security and replaces it with the concept of ‘no one is safe until all are safe.’ This system presents the “HARDWARE” to end war: 1) demilitarizing security, 2) managing conflicts without violence, and 3) creating a culture of peace. And the “SOFTWARE,” to develop the values and concepts of a Peace Culture. It concludes with the steps that need to be taken to succeed with Peace. World Beyond War is optimistic it can be done.

A Vision of Peace

We will achieve peace when the world is safe for all the children. There will be good education. Schools will be safe. The economy will be healthy and producing in ways that are sustainable. Global warming will have been halted by removing the fossil fuel industry. We will all learn how to defuse and resolve conflicts peacefully. We will have a peace force that will be trained in civilian-based defense which makes nations ungovernable if attacked by another country or internal coup. Health care will be freely available. The air and water will be clean and soils healthy and producing healthy food. Different cultures work and play together. The arts will flourish. We will recognize we are citizens of one planet and our respective countries. Some people will serve humanity in voluntary organizations for the common good.

Introduction: A Blueprint for Ending War

War now threatens whole populations and ecosystems with annihilation. We need to replace war with an Alternative Global Security System.

Why is an Alternative Global Security System both Desirable and Necessary?

If a peaceful state were confronted by an aggressive one, there were only three choices: submit, flee, or imitate the war-like state. We can end war only if we change the mindset and examine the myths. We need to ask questions to understand an aggressor’s and one’s own behavior. Like medicine, treating only the symptoms of a disease will not cure it.  We must reflect before pulling out the gun.

War fails to bring peace, is becoming more destructive, and is causing an environmental crisis.

Why World Beyond War thinks a Peace System is Possible

Most nations do not fight other nations most of the time. Major systems have changed:

Slavery is largely abolished. The status of women has improved dramatically. Over a hundred nations freed themselves from colonial rule. European nations created the European Union. Greece’s debt crisis, and the 2016 Brexit vote were dealt with through social and political means. We have also seen the Collapse of the Eastern European communist dictatorships, Collapse of the Soviet Union, the End of Apartheid in South Africa, and The Arab Spring. We Live in a Rapidly Changing World where war will not solve global warming, agricultural changes, stressed species, forest fires, disease, or water shortages. The Perils of Patriarchy are challenged by education and examining stereotypes. The interlocked structures of the War System are the norm.  An interlocked structure of Alternative Global Security System (structures, values, and techniques, pushed by nonviolent people power) to replace war is developing. Nonviolence can resist violence and thus is the foundation of peace.

The Alternative Global Security System is a web of volunteer governing structures and a shift of cultural norms away from violence and domination. Nations cannot keep out ideas. No nation can go it alone. Security must be global if it is to exist at all. We must Shift to a Defense posture from an Offense posture, and Reconfigure training, logistics, doctrine, and weaponry that Rules out armed attacks against other states. These methods Create a Nonviolent, Civilian-Based Defense Force where all cooperation is withdrawn from the invading power.

Phase Out Foreign Military Bases and End Invasions and Occupations.

Disarmament – We must quit selling arms to foreign countries. Arms Trade should be added to the International Criminal Court’s list of “crimes against humanity.”

End the use of militarized drones. Phase out weapons of mass destruction and nuclear weapons. World stockpiles of chemical weapons have been dramatically reduced however complete destruction is still not attained. Outlaw Weapons in Outer Space. The Outer Space Treaty was reaffirmed in 1999 by 138 nations with only the U.S. and Israel abstaining. (What’s wrong with this picture?)  Realign Military Spending.  The United States alone spends more than the next 15 countries combined on its military. (What’s wrong with this picture?) We need spend on civilian infrastructure. Dismantle Military Alliances such as NATO. Women want to spread feminism worldwide, eliminate patriarchal structures, and secure the safety for feminists, women peacebuilders and human rights defenders. The International Court of Justice (ICJ; the “World Court”) was set up to adjudicate disputes between nation states. The League of Nations attempted peace. Note that the U.S. refused to join. (What’s wrong with this picture?) The European Union has kept a peaceful Europe despite differences. The African Union is keeping the peace between Egypt and Ethiopia. The Association of South-East Asian Nations, and the Union de Naciones Suramericanas are developing.

The United Nations needs to be reformed. Nothing in the Charter requires the UN to act. They should take up all cases of violent conflict immediately, halt hostilities, require mediation, and if necessary refer the dispute to the International Court of Justice. This will require several further reforms as listed below, including dealing with the veto, shifting to nonviolent methods as the primary tools by making use of nonviolent unarmed civilian peace workers, and providing accountable police power to enforce its decisions when needed. The International Court of Justice needs to be strengthened. The Court is free standing and is not a part of the UN System although it operates in partnership with it. The United States declared they do not intend to become a part of the Treaty. (What’s wrong with this picture?)

There is a whole list of things that need to be done at the UN to make it functional: Strengthen the International Criminal Court, Nonviolent Intervention with Civilian Peacekeeping Forces, International Law, Encourage Compliance with Existing Treaties, Create New Treaties, Create a Stable, Fair and Sustainable Global Economy as a Foundation for Peace, Democratize International Economic Institutions, Create an Environmentally Sustainable Global Aid Plan. The major problem with the UN is the “Collective Security” defined as when a nation threatens or initiates aggression, the other (Collective) nations will bring to bear preponderant force acting as a deterrent, or as a very early remedy for an invasion by defeating the aggressor on the battlefield. This is a militarized solution, threatening or carrying out a larger war to deter or prevent a smaller war.

A solution to the broken UN is the Earth Federation. It is an unarmed, non-military federation made up of a democratically elected World Parliament with power to pass binding legislation, a World Judiciary, and a World Executive as the administrative body. A large movement of citizens has met several times as the Provisional World Parliament and they have drafted a World Constitution designed to protect liberty, human rights, and the global environment, and to provide for prosperity for all. There are dozens (hundreds?) of International Non-Governmental Organizations in quest for peace found worldwide in professional associations, clubs, unions, faith-based organizations, clans, and other community groups.

Creating a Culture of Peace – A peace culture promotes peaceable diversity and includes lifeways, patterns of belief, values, behavior, and accompanying institutional arrangements that promote mutual caring and well-being as well as an equality that includes an appreciation of difference, stewardship, and equitable sharing of the resources. It offers mutual security for humankind in all its diversity through a profound sense of species identity as well as kinship with the living earth. There is no need for violence.

Tell history of peace instead of war: we are living in a developing global peace system. Life is an interconnected whole of inestimable worth. We cannot be fulfilled by an indefinite consumption of things, but by a potentially infinite expansion of our relationships. We can never injure others without injuring ourselves. Security does not come from defeating “enemies”; it can only come from turning enemies into friends. Nonviolent struggle, as a substitute for war, began with Gandhi, was carried on by King, and was perfected in the struggles to overthrow the East European Communist Empire, Marcos in the Philippines, and Mubarak in Egypt.

Actively Debunk these following Myths about War: It is impossible to eliminate war. War is in our genes. War is “natural.” We have always had war. War is inevitable because of crises beyond our control like resource scarcity, environmental crises, over-population, etc. We are a sovereign nation. We go to war to ensure our defense. Some wars are “good” wars. The “Just War Doctrine” War and war preparation bring peace and stability. War makes us safe. War is necessary to kill the terrorists. War is good for the economy and benefits the war makers.

Planetary Citizenship: One People, One Planet, One Peace. Humans are in fact one people living on a very fragile planet. We all share in one atmosphere, one great ocean, one global climate, one single source of fresh water endlessly cycled around the earth, one great biodiversity. These constitute the biophysical commons on which civilization rests. It is gravely threatened by our industrial way of life, and our common task is to preserve it from destruction if we wish to live on. Spreading and Funding Peace Education and Peace Research — Peace Science has emerged as an academic discipline now offered worldwide. Cultivating Peace Journalism – A movement conceived by peace scholar Johan Galtung. In peace journalism, editors and writers give the reader a chance to consider nonviolent responses to conflict rather than the usual knee-jerk reaction of counter violence. It is oriented in Peace/conflict, Truth, People, Solutions.

Accelerate the Transition to An Alternative Security System through massive education, and nonviolent action to dismantle the war machine. One key place to start ending war is within the U.S. government. Educating the Many and the Decision and Opinion Makers – World Beyond War will work to remove nationalism, xenophobia, racism, religious bigotry, and exceptionalism from popular thinking. Nonviolent Direct Action Campaigns advance common understanding of nonviolence as an alternative form of conflict to violence, and end the habit of thinking that one can ever be faced with only the choices of engaging in violence or doing nothing.

The Alternative Global Security System Concept is a Movement Building Tool that contains: Communication that is palatable to mainstream audiences, is part of a Broader network, and has a unifying language providing synergy and renewed hope. This communication provides us with a new vocabulary and a vision of realistic alternatives to war and paths toward common security. It is a powerful alternative narration across nations and cultures and a framework for communication using constructive conflict transformation approaches. It can reach more bystanders by tapping into ongoing topics like climate change or the recurring events like gun violence or the death penalty.

Conclusion – If you want peace, prepare for peace.