Anti-Drone Resistance Increases due to Spiking U.S. Bombing in the Middle East.

In response to a huge spike in civilian deaths from U.S. bombing in Iraq, Syria, and Yemen under President Trump, Anti-drone activists stopped Tuesday, March 28, early a.m. commute traffic at Beale Air Force Base for nearly an hour.  Catching military security off guard, four nonviolent activists, risking arrest, stretched their bodies and banners across the narrow 2-lane Vasser gate entry road, not their usual site of monthly ongoing anti-drone protests.  Commuter traffic has increased on this road in recent months due to a temporary closure of a primary commuter route on South Beale Rd, due to needed road/bridge restoration.

One banner read, “U.S. Drone Kills 49, while praying in mosque, Syria  (March 16, 2017),” to educate base personnel of the recent U.S. reaper drone missile attack that tragically killed 49 Syrians in a village mosque near Aleppo.  A fifth activist walked down the line of stalled traffic and handed out leaflets about the incident to those who would accept.

The leaflet questioned the reader:

“How would you feel if a foreign country attacked your place of worship?  Beale personnel in the Global Hawk drone program witness this carnage on their computer screens.  What toll is taken on their psychic and spiritual well-being?”

Civilian war casualties have dramatically increased under the Trump Adminstration, including:

Beale Air Force Base is home to the Global Hawk surveillance drone that is intimately involved in the target drone assassination program by helping to locate and track potential U.S. targets and by directly participating in a collaborative way when drone strikes occur, often resulting in high numbers of collateral damage, according to independent research.

Simultaneous protests at 2 other gates at Beale Air Force Base this morning by peaceful activists left a clear message to Beale military personnel:

“America is getting weary of the state of perpetual warfare that is costing trillions of dollars, reaping great profits for the defense industry and stealing dearly needed tax money from national programs for human needs and services.  Neither major political parties seem directed to stop it anytime soon.  We will continue our ongoing protests and resistance until this state of perpetual violences ceases,” says Toby Blome, a member of CODEPINK, a women-led organization working for peace.  Northern California Catholic Worker and CODEPINK collaborated on this morning’s human blockade.

As the nonviolent protesters approached each driver during their blockade, they attempted to explain to them the urgency of their actions, calling on each one of them to assume some responsibility for the state of endless war that the U.S. is in.  After a brief exchange with each driver, they allowed the driver to pass their blockade, and then they continued their efforts with the next driver in line.  After nearly an hour of blocking the incoming traffic, the activists moved off the highway and stood at the side of the road. 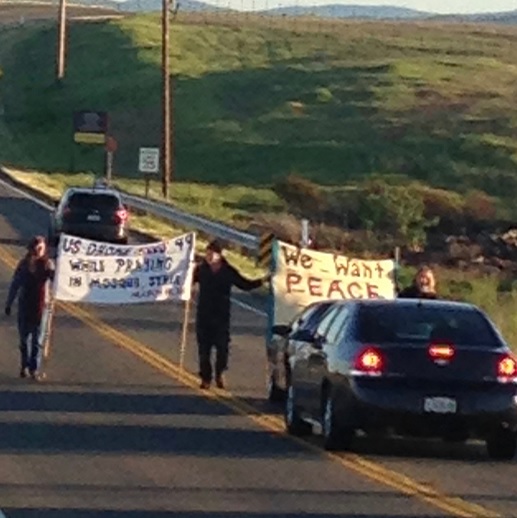 In light of this horrendous news:

Our action at Beale AFB (scroll down) couldn’t have been more timely!

Iraq, My heart weeps for you!

Please join our 3rd Annual SHUT DOWN CREECH, April 23-29
Mass mobilization to Ground the Drones and oppose Global Militarization.
Gather at Camp Justice peace encampment…where together we are PEACE!
(Transportation to/from airport and most meals provided)