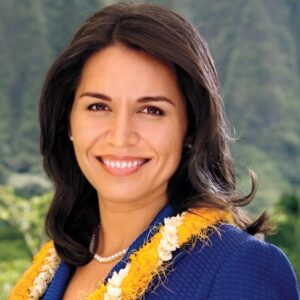 As much of Washington prepared for the inauguration of President Donald Trump, I spent last week on a fact-finding mission in Syria and Lebanon to see and hear directly from the Syrian people. Their lives have been consumed by a horrific war that has killed hundreds of thousands of Syrians and forced millions to flee their homeland in search of peace.

It is clear now more than ever: this regime change war does not serve America’s interest, and it certainly isn’t in the interest of the Syrian people.

I traveled throughout Damascus and Aleppo, listening to Syrians from different parts of the country. I met with displaced families from the eastern part of Aleppo, Raqqah, Zabadani, Latakia, and the outskirts of Damascus. I met Syrian opposition leaders who led protests in 2011, widows and children of men fighting for the government and widows of those fighting against the government. I met Lebanon’s newly-elected President Aoun and Prime Minister Hariri, U.S. Ambassador to Lebanon Elizabeth Richard, Syrian President Assad, Grand Mufti Hassoun, Archbishop Denys Antoine Chahda of Syrian Catholic Church of Aleppo, Muslim and Christian religious leaders, humanitarian workers, academics, college students, small business owners, and more.

Their message to the American people was powerful and consistent: There is no difference between “moderate” rebels and al-Qaeda (al-Nusra) or ISIS – they are all the same. This is a war between terrorists under the command of groups like ISIS and al-Qaeda and the Syrian government. They cry out for the U.S. and other countries to stop supporting those who are destroying Syria and her people.

I heard this message over and over again from those who have suffered and survived unspeakable horrors. They asked that I share their voice with the world; frustrated voices which have not been heard due to the false, one-sided biased reports pushing a narrative that supports this regime change war at the expense of Syrian lives.

I heard testimony about how peaceful protests against the government that began in 2011 were quickly overtaken by Wahhabi jihadist groups like al-Qaeda (al-Nusra) who were funded and supported by Saudi Arabia, Turkey, Qatar, the United States, and others. They exploited the peaceful protesters, occupied their communities, and killed and tortured Syrians who would not cooperate with them in their fight to overthrow the government.

I met a Muslim girl from Zabadani who was kidnapped, beaten repeatedly, and raped in 2012, when she was just 14 years old, by “rebel groups” who were angry that her father, a sheep herder, would not give them his money. She watched in horror as masked men murdered her father in their living room, emptying their entire magazine of bullets into him.

I met a boy who was kidnapped while walking down the street to buy bread for his family. He was tortured, waterboarded, electrocuted, placed on a cross and whipped, all because he refused to help the “rebels”?—?he told them he just wanted to go to school. This is how the “rebels” are treating the Syrian people who do not cooperate with them, or whose religion is not acceptable to them.

Although opposed to the Assad government, the political opposition spoke strongly about their adamant rejection of the use of violence to bring about reforms. They argue that if the Wahhabi jihadists, fueled by foreign governments, are successful in overthrowing the Syrian state, it would destroy Syria and its long history of a secular, pluralist society where people of all religions have lived peacefully side by side. Although this political opposition continues to seek reforms, they are adamant that as long as foreign governments wage a proxy regime change war against Syria using jihadist terrorist groups, they will stand with the Syrian state as they work peacefully toward a stronger Syria for all Syrians.

Originally, I had no intention of meeting with Assad, but when given the opportunity, I felt it was important to take it. I think we should be ready to meet with anyone if there’s a chance it can help bring about an end to this war, which is causing the Syrian people so much suffering.

I return to Washington, DC with even greater resolve to end our illegal war to overthrow the Syrian government. From Iraq to Libya and now in Syria, the U.S. has waged wars of regime change, each resulting in unimaginable suffering, devastating loss of life, and the strengthening of groups like al-Qaeda and ISIS.

I call upon Congress and the new Administration to answer the pleas of the Syrian people immediately and support the Stop Arming Terrorists Act. We must stop directly and indirectly supporting terrorists – directly by providing weapons, training and logistical support to rebel groups affiliated with al-Qaeda and ISIS; and indirectly through Saudi Arabia, the Gulf States, and Turkey, who, in turn, support these terrorist groups. We must end our war to overthrow the Syrian government and focus our attention on defeating al-Qaeda and ISIS.

The U.S. must stop supporting terrorists who are destroying Syria and her people. The U.S. and other countries fueling this war must stop immediately. We must allow the Syrian people to try to recover from this terrible war.