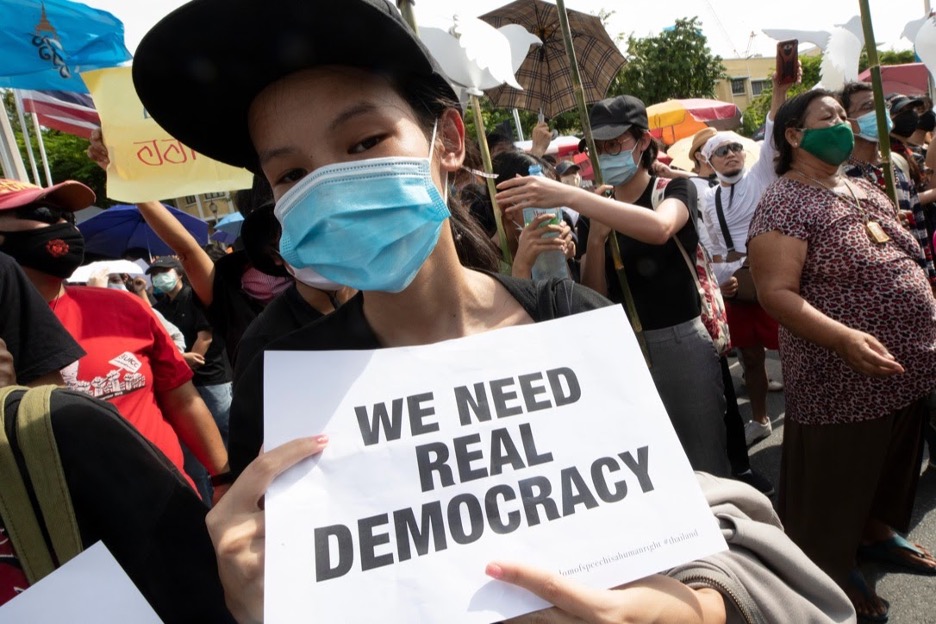 Protest by students in Thailand. AP

President Biden’s virtual Summit for Democracy on December 9-10 is part of a campaign to restore the United States’ standing in the world, which took such a beating under President Trump’s erratic foreign policies. Biden hopes to secure his place at the head of the “Free World” table by coming out as a champion for human rights and democratic practices worldwide.

The greater possible value of this gathering of 111 countries is that it could instead serve as an “intervention,” or an opportunity for people and governments around the world to express their concerns about the flaws in U.S. democracy and the undemocratic way the United States deals with the rest of the world. Here are just a few issues that should be considered:

A broad global ranking of countries by various measures of democracy puts the U.S. at # 33, while the U.S. government-funded Freedom House ranks the United States a miserable # 61 in the world for political freedom and civil liberties, on a par with Mongolia, Panama and Romania.

And consider China’s extraordinary success in relieving poverty. As UN Secretary General Antonio Guterres said, “Every time I visit China, I am stunned by the speed of change and progress. You have created one of the most dynamic economies in the world, while helping more than 800 million people to lift themselves out of poverty – the greatest anti-poverty achievement in history.”

China has also far surpassed the U.S. in dealing with the pandemic. Little wonder a Harvard University report found that over 90% of the Chinese people like their government. One would think that China’s extraordinary domestic achievements would make the Biden administration a bit more humble about its “one-size-fits-all” concept of democracy.

Inviting the government of Taiwan to the U.S. summit further erodes the 1972 Shanghai Communiqué, in which the United States acknowledged the One-China policy and agreed to cut back military installations on Taiwan.

Also invited is the corrupt anti-Russian government installed by the 2014 U.S.-backed coup in Ukraine, which reportedly has half its military forces poised to invade the self-declared People’s Republics of Donetsk and Luhansk in Eastern Ukraine, who declared independence in response to the 2014 coup. The U.S. and NATO have so far supported this major escalation of a civil war that already killed 14,000 people.

Heck, the administration even uses U.S. tax dollars to “donate” weapons to dictators, like General Sisi in Egypt, who oversees a regime with thousands of political prisoners, many of whom have been tortured. Of course, these U.S. allies were not invited to the Democracy Summit—that would be too embarrassing.

So why is the U.S. imposing brutal sanctions on countries from Venezuela to North Korea that are causing inflation, scarcity, and malnutrition among children? Former UN special rapporteur Alfred de Zayas has blasted the United States for engaging in “economic warfare” and compared its illegal unilateral sanctions to medieval sieges. No country that purposely denies children the right to food and starves them to death can call itself a champion of democracy.

The United States is denying the new government access to billions of dollars in Afghanistan’s foreign currency reserves held in U.S. banks, causing a collapse in the banking system. Hundreds of thousands of public servants have not been paid. The UN is warning that millions of Afghans are at risk of starving to death this winter as the result of these coercive measures by the United States and its allies.

But no. In the end, they could only agree to invite the state of Israel, an apartheid regime that enforces Jewish supremacy over all the land it occupies, legally or otherwise. Embarrassed to have no Arab states attending, the Biden administration added Iraq, whose unstable government has been racked by corruption and sectarian divisions ever since the U.S. invasion in 2003. Its brutal security forces have killed over 600 demonstrators since huge anti-government protests began in 2019.

This gross violation of human rights continues, with most of the 39 remaining detainees never even charged with a crime. Yet this country that has locked up hundreds of innocent men with no due process for up to 20 years still claims the authority to pass judgment on the legal processes of other countries, in particular on China’s efforts to cope with Islamist radicalism and terrorism among its Uighur minority.

If this was a real democracy summit, whistleblowers like Daniel Hale, Chelsea Manning and Julian Assange, who have risked so much to expose the reality of U.S. war crimes to the world, would be honored guests at the summit instead of political prisoners in the American gulag.

The Trump administration anointed Juan Guaidó as “president” of Venezuela, and Biden invited him to the summit, but Guaidó is neither a president nor a democrat, and he boycotted parliamentary elections in 2020 and regional elections in 2021. But Guaido did come tops in one recent opinion poll, with the highest public disapproval of any opposition figure in Venezuela at 83%, and the lowest approval rating at 13%.

Guaidó named himself “interim president” (without any legal mandate) in 2019, and launched a failed coup against the elected government of Venezuela. When all his U.S.-backed efforts to overthrow the government failed, Guaidó signed off on a mercenary invasion which failed even more spectacularly. The European Union no longer recognizes Guaido’s claim to the presidency, and his “interim foreign minister” recently resigned, accusing Guaidó of corruption.

When the United States emerged from the Second World War as the strongest economic and military power in the world, its leaders had the wisdom not to claim such a role. Instead they brought the whole world together to form the United Nations, on the principles of sovereign equality, non-interference in each other’s internal affairs, a universal commitment to the peaceful resolution of disputes and a prohibition on the threat or use of force against each other.

The United States enjoyed great wealth and international power under the UN system it devised. But in the post-Cold War era, power-hungry U.S. leaders came to see the UN Charter and the rule of international law as obstacles to their insatiable ambitions. They belatedly staked a claim to universal global leadership and dominance, relying on the threat and use of force that the UN Charter prohibits. The results have been catastrophic for millions of people in many countries, including Americans.

Since the United States has invited its friends from around the world to this ”democracy summit,” maybe they can use the occasion to try to persuade their bomb-toting friend to recognize that its bid for unilateral global power has failed, and that it should instead make a real commitment to peace, cooperation and international democracy under the rules-based order of the UN Charter.