The Democratic leadership in the House and the nation’s leading environmental organizations have praised the PFAS Action Act, although the measure is a disaster for public health and the environment on several fronts. The bill passed the House of Representatives on January 10, 2020. The vote was 247-159, with 223 Democrats voting for the measure along with 24 Republicans.

Overwhelmingly positive media coverage of the legislation has focused on the long-overdue provision that would require the EPA to designate two organic compounds, PFOS and PFOA, as hazardous substances under the Superfund program. Such a designation would force the Pentagon to foot the bill for cleaning up hundreds of contaminated bases and surrounding communities in the U.S. It’s a relatively small step in the right direction. 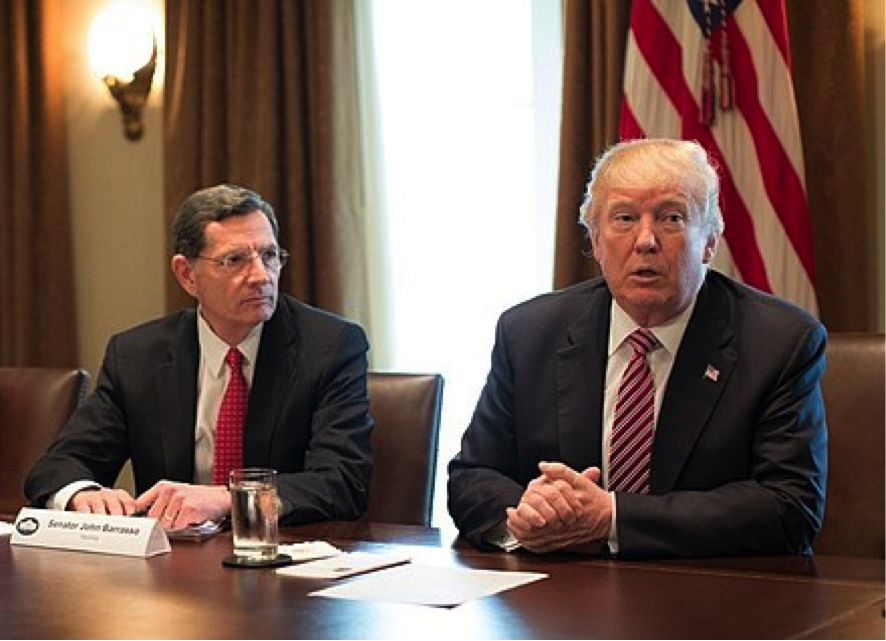 Sen. John Barrasso and President Trump wield great power over human and environmental health. The military and the chemical industry will be free to continue contaminating people and the planet despite the PFAS Action Act.

For two generations, the DOD has used the carcinogens in firefighting foams during routine training exercises on military bases. The substances work well in extinguishing petroleum-based fires, the kind that might engulf a $100 million F-35. The cancer-causing agents have been allowed to seep into the ground to poison ground water, surface water, and drinking water. The groundwater plumes spread for miles.

The bill is now in the hands of Sen. John Barrasso, (R-Wy) Chairman of the Committee on Environment and Public Works. Barrasso protects the interests of the DOD and the chemical industry in Congress so he is opposed to designating the human carcinogens as hazardous substances.

Sen. Barrasso is the top recipient of cash from the chemical industry in the Senate and he says the measure “has no prospects in the Senate.” The powerful chairman is “negotiating” from a position of strength as the Senate undertakes the measure, which has been seriously pared down by the Democratic-controlled House.

HR 535 only designates PFOS and PFOA as hazardous chemicals – while all PFAS are regarded by the scientific community as presenting a threat to public health.

HR 535 directs the EPA to test all varieties of PFAS and says the EPA Administrator “shall ensure that the period is as short as possible while allowing for completion of the required testing.” Seriously? How long will it take for this snail-paced institution under the control of industry-insider Andrew Wheeler to get through the paperwork? This amounts to a “forever clause” for the “forever chemicals.”

Rather than starting with the premise that all PFAS substances are potentially fatal and should be immediately banned until each one is proven by a ton of science to be OK for say, water-guzzling pregnant women, Congress is going about it the other way around. That is to say that all PFAS are OK until we start looking at all 6,000 of them – one at a time – and we’ll let you know if we determine if one is a baddie and should be designated as a hazardous substance under the Superfund law. This is precisely what the chemical industry is paying Congress to do.

Eight fluorinated carbon atoms – the strongest bond ever developed.
Pandora couldn’t close her box, and neither can we.

We must limit all PFAS to 1 ppt in drinking water.

Meanwhile, hundreds of governments and airports around the world had already received the memo regarding the destructive impact of PFAS – and switched to the just-as-effective fluorine-free foams, or 3F

Rolling back the mandatory use of the carcinogens at commercial airports
opened the debate over the military’s insistence on the continued use of the chemicals in firefighting foam that contaminate groundwater.

The PFAS Action Act exempts public agencies and private owners of public airports that receive federal funding from liability for remediation of certain releases of PFASs into the environment resulting from the use of aqueous film forming foam.

At the same time, the Trump administration has been claiming “sovereign immunity” in US District Court cases when states sue for compensation for cleaning up the contamination caused by the military. What is sovereign immunity? Hitler and Mussolini loved the concept. In this instance it means the US government reserves the right to poison the American people and the Japanese and the Germans and others – and there’s nothing that states or nations can do about it.

The military has floated a Maximum Contaminant Level (MCL) of 400 ppt. for PFOS and PFOA in groundwater, comparable to allowing the fox to determine hen-house policy. Just to get into the genetically altered weeds for a moment, the DOD has set a screening level for perfluorobutane sulfonic acid (PFBS), a particular variety of PFAS heavily used in fire-fighting foams, at 40,000 ppt. in groundwater. With the EPA in the clutches of corporate managers, many states are rushing to create regulations limiting PFAS in groundwater and drinking water. Vermont, for instance has enacted regulations limiting five 5 varieties of PFAS to 20 ppt in groundwater and drinking water. Other states are following suit, although most, like Louisiana, have been slow to act.

Groundwater wells at England Air Force base in Alexandria, Louisiana were recently found to contain 10,900,000 ppt of PFOS and PFOA. Poor African American folks who live nearby drink from groundwater wells while no one is rushing to protect their health. Although the base closed in 1992, the chemicals persist.

HR 535 says no municipal water systems may be fined for violating the new drinking water regulations for 5 years. That’s an eternity. People are dying.

There are several ways these chemicals may be removed from groundwater and surface water before they’re sent to consumers, although they’re expensive and must be regularly maintained.

For five years, according to the PFAS Action Act, the EPA shall prohibit the manufacture, processing, and distribution of a PFAS not listed on the EPA’s inventory list or the manufacture or processing of a PFAS for a significant new use. This is a good development, yet it is akin to Pandora managing to close her box after most of the demons are let loose. This will be one part of the bill that may survive Barrasso and company.

HR 535 prohibits the “unsafe waste incineration” of PFAS, although there’s not enough science to justify burning the stuff in the first place. Incineration could seriously threaten public health. PFAS may remain carcinogenic even after being incinerated if the temperatures aren’t high enough. The Air Force admits that the foam it uses is engineered to resist super-hot temperatures and is extraordinarily difficult to burn.

Throughout the country these chemicals accumulate in contaminated sewerage sludge that is typically spread on farm fields. Because the chemicals don’t break down, they’re able to contaminate the food chain. Incineration is one way to avoid contaminating food. What to do? It’s a Catch 22.

The much ballyhooed PFAS Action Act directs the EPA to offer guidance on minimizing the use of non-military firefighting foams using PFAS chemicals. The act contains no reference to 3F foams used world-wide. Just how are these decisions rendered? HR 535 should be calling for the immediate and universal phasing out of all military and commercial fire-fighting foams containing PFAS, in favor of the environmentally responsible 3F foams.

HR 535 directs the EPA to set up an instructional website on how to test for PFAS chemicals in privately owned wells but provides no funding for grants. Licensed PFAS testing costs about $400 per test, enough to preclude most people from considering it. This is reprehensible public policy. The military and corporate powers behind this legislation continue putting these chemicals in the ground – and they would prefer to allow millions of Americans to continue drinking poisonous water than to have an honest discussion on liability and how we can work together to protect public health. The EPA does not regulate private drinking water wells and most states and towns do not require sampling of private wells after installation. In America, it is the responsibility of homeowners to maintain the safety of their water and that’s just fine with Congress.

Congress must pass comprehensive legislation calling for testing of all public and private wells for these carcinogens and it must immediately set maximum contaminant levels for drinking water and ground water that protect public health.  No one – especially pregnant women – should drink water containing PFAS.