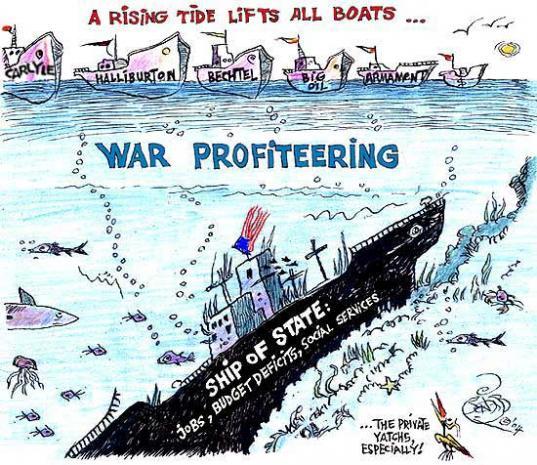 U.S. media outlets will now point out when a president is lying. If that policy holds consistently, we’ll never have a war again.

Congress will now vote to end a war (Yemen) and a president will veto it. If Congress can repeat that on a monthly basis, and the president not veto, we’ll end a lot of wars.

Top military officials will openly laugh about tricking a president into believing he’d withdrawn more troops than he really had from a war (Syria). If presidents or Congress or the public should develop any outrage over that, we might be in good shape. If not, we could be in trouble.

The world can no longer as easily deny the selfish, destructive motivations behind U.S. imperialistic behavior, even if a new president dresses it up more politely.

Trump continued many things: ever increasing military spending and drone murders and wars fought ever more from the air, more base construction and coups and nuclear weapons construction, more weapons sales, more shredding of disarmament treaties, more weapons in Europe and hostility toward Russia and war rehearsals, and more badgering other nations to spend more on weapons. As the White House flips from one of the two war parties to the other and back again, it becomes harder to end ongoing atrocities.

Yet Trump was the first U.S. president in a long time to not start a major new war. So, longstanding trends can be ended. Outrages can be made less normal.

However, liberals have spent four years learning that Russia is their enemy, that foreign dictators must be hated and attacked as friends of Trump, that NATO and the CIA are their saviors, and that foreign bases and occupations and cold wars are the backbone of a stable, humane, de-Trumped world. It’s unclear how lasting that damage will be.

But this was the most foreign-policy-free election in decades. Nobody voted on foreign policy. Biden didn’t even have a foreign policy page on his website or a foreign policy task force. His long career promises catastrophic horrors, but his campaign promised very little good or bad.

The demand to re-end the war on Yemen and not have it vetoed has some momentum, and opens the door to ending weapons sales to Saudi Arabia and UAE and others. And if that war can be ended, why shouldn’t Afghanistan or Syria be next?

Biden has promised better relations with Cuba — which we must use to open the door to ending brutal sanctions on Cuba, Iran, North Korea, and others.

Biden must be pressured to drop sanctions against top officials of the International Criminal Court — and we must use that to open a door to consideration of actually behaving lawfully and supporting the rule of law.

There is no shortage of work to be done.