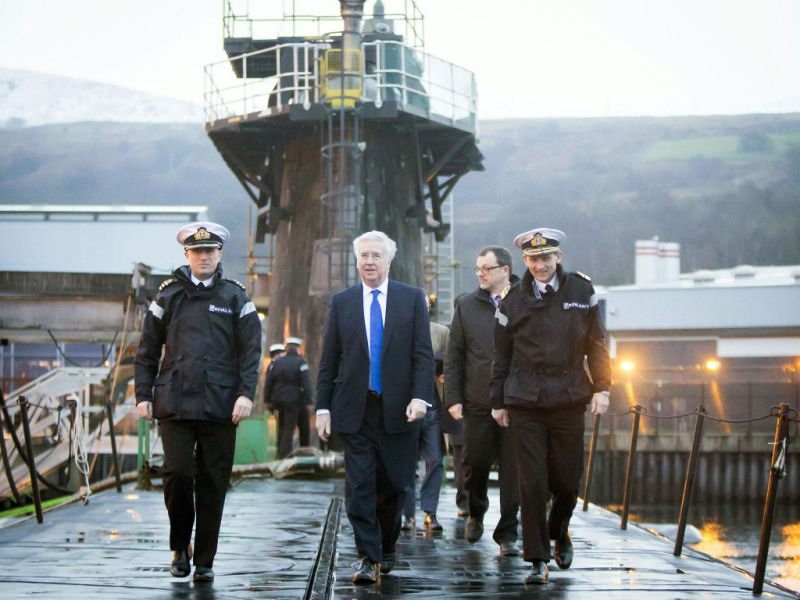 Sir Michael Fallon on board the HMS Vigilant in Clyde. The submarine is one of four vessels carrying the Trident nuclear system: Getty

The number one priority for any government has to be keeping its citizens safe, and the events of the last few months have rightly refocused minds on the question of Britain’s security. From undermining the integrity of online tools like WhatsApp to armed police on every street corner, the Conservative Government has jumped from one idea to the other in an effort to look tough on terror.

Watching these debates, one cannot escape a powerful sense of irony: as ministers talk of the need to modernise our defences against terrorism, the most archaic of all our security systems, Trident, remains untouched. This despite it being wholly unfit as a response to the cyber attacks, climate change and weaponised cars and lorries that have proven themselves to be the biggest threats to our safety today.

Politicians’ attachment to Trident is much more about emotion than it is about rational debate. Fear and a distorted sense of nationalism stoke the fires of those who would like us to renew and upgrade our nuclear arsenal.

Not so, thankfully, in the majority of nations. This week, more than 120 countries are gathered at the United Nations to agree a treaty to ban nuclear weapons. Theresa May, true to form, has not even bothered to turn up and the UK will, shamefully, have no official representative. Global parliamentarians and representatives of civil society are here at the UN though and, as chair of Parliamentary CND, I am proud to represent my party and those MPs with a passionate commitment to the cause of nuclear disarmament.

The prospects for this treaty seem good. It has already passed some significant hurdles. The negotiations taking place were voted for by 113 nations back in December. Already some nuclear weapon states have softened their opposition to the idea of a ban: China, India, and Pakistan all abstained from the vote last winter.

In working towards a ban, the International Campaign to Abolish Nuclear Weapons – a coalition of peace campaigns united across 90 countries – is following a well trodden path. Chemical and biological weapons, cluster munitions, and landmines were all banned before full-scale decommissioning and disarmament began. History has taught us that stigmatising the weapons themselves, rather than the obvious hypocrisy of nuclear states lecturing non-nuclear nations, is the most effective way to prevent their proliferation.

Back here in Britain, I sense a shifting of the sands.

A recent poll found that three in four people think the UK should attend the UN disarmament talks and three in four also agree that Britain’s unethical foreign policy is making us less safe. With three terror attacks in three months, it is becoming harder to maintain the illusion that a simple ramping up of our existing defence policies is likely to bring results. Thinking the previously unthinkable might now be our only option.

And yet I know that we still have a long way to go. While the number of Tories backing disarmament are few and far between, many of us have held out hope that Labour under Jeremy Corbyn might become a cheerleader for disarmament. Sadly, those hopes were dashed last month when their manifesto committed them to the renewal of Trident. However, I continue along our own manifesto promises with optimism.

I expect that my resolve will be strengthened even further after being at the UN. Meeting campaigners and ambassadors from the across the globe, each bound by a shared vision for a safer world and committed to change, will, I have no doubt, be infectious. On my return, I hope to share some of that energy with my colleagues in parliament and do all I can to help prevent Britain becoming chained to a defence strategy that is as destructive as it is illogical.