Around 15,000 activists from around Europe and North America marched through the streets of Brussels on May 24, 2017 in opposition to the meeting of the North Atlantic Treaty Organization (NATO) and the presence of U.S. President Donald Trump.  NATO war exercises on the Russian border and NATO participation in U.S. wars of choice in the Middle East and North Africa have increased the dangers to our security, not lessened them.

Trump’s appearance at the NATO summit in his first trip outside the United States generated many themes for the march. Greenpeace used a variation of Trump’s slogan “Make America Great Again” for its massive banners: “Make Peace Great Again.” 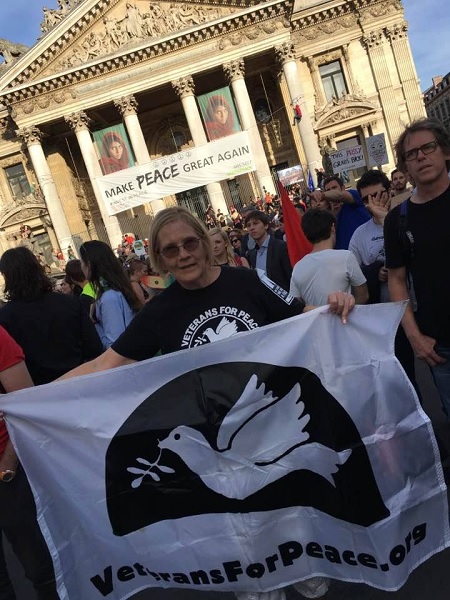 Trump’s misogynist statements compelled the Pink Pussy Hats to return to the streets of Brussels with two large groups of women and men challenging his rebuke to women. Peace groups from Germany, the United Kingdom, France, Italy and Belgium challenged the NATO war machine 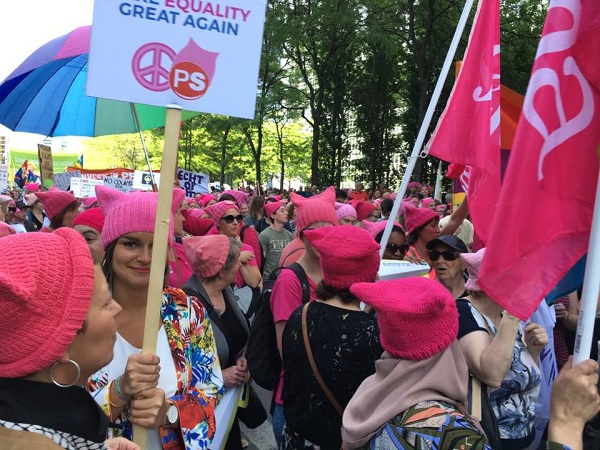 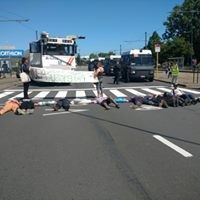 125 persons were arrested for blocking a highway leading to the NATO ministerial meeting (right).

After calling NATO “obsolete” during his presidential campaign, Trump faced the other 27 nations in NATO by saying that “NATO is no longer obsolete” and “You owe us a lot of money.”  The media has widely reported that the NATO meeting schedule was dramatically shortened to accommodate Trump’s short attention span.  Presentations by country representatives were mandated to four minutes or less.

Only five of 28 members (US, UK, Poland, Estonia and Greece) have 2 percent of their national budgets dedicated to military expenditures and Trump railed at member countries for not budgeting more.  The overall spending on defense by NATO countries will be more than $921 billion (http://money.cnn.com/2017/05/ 25/news/nato-funding- explained-trump/ ) while $1.4 billion goes to NATO to funds some NATO operations, training and research and the NATO strategic command center.

Trump’s proposed increase of 5,000 U.S. military into Afghanistan will increase by one-third the NATO presence in Afghanistan and he is urging other NATO countries to increase their presence.  Currently, there are 13,000 NATO forces including 8,500 U.S. in Afghanistan.

NATO war preparations through extensive exercises and meetings have generated a predictable response from the Russians who view the large number of military actions as offensive and aggressive.  In the month of May 2017, NATO conducted the following exercises and events.

The week of activities in Brussels included a peace camp https://stopnato2017.org/nl/ peace-camp with about 50 young participants.

The next major international gathering will be in Hamburg, Germany for the G-20 meetings July 5-8, 2017.  The Summit for Global Solidarity will be  July 5-6, a day of civil demonstrations on  July 7 and a mass demonstration on  July 8.

About the Author:  Ann Wright served 29 years in the US Army/Army Reserves and retired as a Colonel.  She also was a U.S. diplomat for 16 years in U.S. Embassies in Nicaragua, Grenada, Somalia, Uzbekistan, Kyrgyzstan, Sierra Leone, Micronesia, Afghanistan and Mongolia.  She resigned from the U.S. government in March 2017 in opposition to President Bush’s war on Iraq.  She is the co-author of “Dissent: Voices of Conscience.”