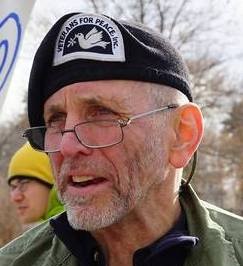 Let me talk about war.

How many of you believe war is bad? And I, after my time in war, totally agree with you.
War is not about conflict resolution it does not resolve conflicts.
War is not about national security it does not make us secure.
It is always a rich man’s war run on the blood of poor people. War can reasonably be visualized as a giant machine that grinds up the working people to feed the rich man.
War is the greatest concentrator of wealth.
War is used to steal away our unalienable rights.

General Eisenhower described how the people of the aggressing nation pay a high cost for war when he said “Every gun that is made, every warship launched, every rocket fired signifies in the final sense, a theft from those who hunger and are not fed, those who are cold and are not clothed. This world in arms is not spending money alone. It is spending the sweat of its laborers, the genius of its scientists, the hopes of its children. This is not a way of life at all in any true sense. Under the dark clouds of war, it is humanity hanging on a cross of iron.”

What do we pay for war? There are 15 cabinet level departments in our government. We give 60% of the budget to one – the War Department. That leaves the other 14 departments fighting over the crumbs. Those 14 departments included things like: health, education, justice, department of state, interior, agriculture, energy, transportation, labor, commerce, and other things that are important to our lives.

Or looked at another way we, the US, spend more on war than the next 8 nations all put together. That includes Russia, China, France, England, I don’t remember who they all are. But not North Korea it is way down the list around number 20.

Why do we choose to do this? When are we going to get off of this stupid cycle? When we do break out of the cycle we can do things like: feed our hungry, educate our children (which are our future), end discrimination, pay workers an honest wage, end inequality, we could even create a democracy here in this country.

We can do these things. But only if we deny the rich and powerful their wars.